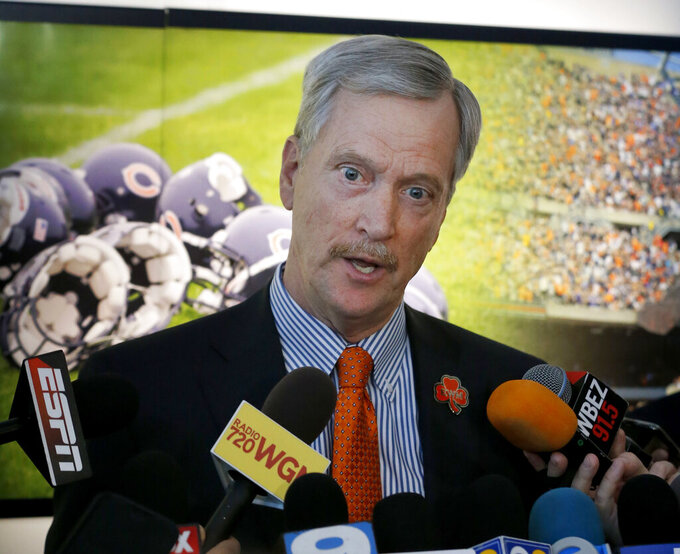 FILE - Chicago Bears chairman George H. McCaskey talks to reporters after an end of season NFL football news conference with coach John Fox and general manager Ryan Pace, Jan. 4, 2017, in Lake Forest, Ill. McCaskey simply could not ignore the Bears' record, no matter how much he and the rest of his family that owns the team enjoyed having general manager Ryan Pace and coach Matt Nagy around. (AP Photo/Charles Rex Arbogast, File)

CHICAGO (AP) — Ryan Poles made the Chicago Bears this time.

Poles was hired as Chicago's general manager on Tuesday, almost 15 years after he signed with the team as an undrafted free agent and then failed to make the final roster.

Poles spent the previous 13 seasons in the Chiefs’ front office, the past year as executive director of player personnel under general manager Brett Veach. He was the team’s director of college scouting in 2017 when Kansas City drafted Patrick Mahomes with the No. 10 overall pick — after Chicago took Mitchell Trubisky at No. 2.

“The Chicago Bears are one of the flagship franchises in the National Football League and are recognized as one of the most prestigious clubs in all of sports,” Poles said in a release. “It’s an honor for me to join such a well-regarded organization. Together with my family, I’m looking forward to hitting the ground running to help get this organization, its fanbase and the city what they deserve: a winning team and a Super Bowl trophy.”

They settle don the 36-year-old Poles.

“I think the Bears are in a nice position with him, he’s smart, he knows football, he knows players, he works hard and he’s organized,” Chiefs coach Andy Reid said Wednesday. “That's what they're getting — that's pretty good intangible things to be putting in your department there. He’s good with people also, and I think he’ll do a nice job.”

A big part of Poles' job will be solidifying the quarterback position that has haunted the founding NFL franchise for decades.

That likely means figuring out a way to get the most out of Justin Fields and surrounding him with the talent to help him develop. The former Ohio State star had a shaky rookie season, though he also showed potential.

Turning around the franchise will be a big job. First up, he has to help the team settle on a coach after Nagy was let go.

The Bears announced later in the day that Poles had interviewed Jim Caldwell for the coaching job. Caldwell, a former head coach in Detroit and Indianapolis, also talked to the organization about the position on Jan. 15.

Chicago has just seven playoff appearances in the past 30 years.

“We are thrilled to be able to add someone of Ryan’s background and football expertise to our organization,” McCaskey said in a release. “His accomplishments with the Chiefs speak for themselves and amplified the team’s standing as one of the premier franchises in professional sports. We are confident that under his leadership, we will reach our goal of bringing a Super Bowl championship to Chicago.”

Poles played offensive tackle at Boston College, where he blocked for longtime Falcons quarterback Matt Ryan. He signed with the Bears in 2008, but he didn't make the roster.

The Bears went 48-65 with one winning season and made the postseason twice in the seven years since Pace was hired out of New Orleans’ front office in 2015 to replace Phil Emery. Nagy was 34-31 in four seasons, dropping seven of eight to rival Green Bay. That included a loss at Soldier Field in October in which Aaron Rodgers turned to the crowd after running for a touchdown to help secure yet another win for the Packers over Chicago and screamed, “I still own you! I still own you!”

Pace’s tenure was marred by his inability to settle the quarterback position. He whiffed when he traded up a spot to draft Trubisky with the No. 2 pick in 2017. He also signed Mike Glennon, traded for Nick Foles and paid up for Andy Dalton. And Fields’ future is an ongoing question.

Chicago ranked 24th in yards per game and 27th in scoring last season. The Bears never finished higher 21st on offense under Nagy, who was hired off Reid's staff in Kansas City to develop Trubisky and turn around a struggling unit.

Fields showed the arm, speed and poise that convinced Pace to trade up nine spots with the New York Giants to draft him with the No. 11 overall pick. But he also has plenty of room to grow.

Penciled in as the backup, Fields took over as the starter after Dalton was injured in Week 2. He threw more interceptions (10) than touchdown passes (seven) to go with an unimpressive 73.2 passer rating. Fields also missed time because of rib and ankle injuries. And the Bears were 2-8 in the games he started.