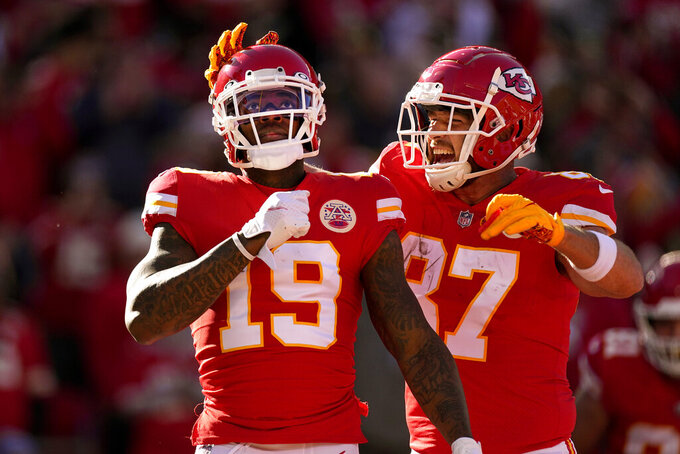 KANSAS CITY, Mo. (AP) — The Kansas City Chiefs added linebacker Willie Gay Jr. to the COVID-19 list on Wednesday, one day before they play the Los Angeles Chargers in a game that could go a long way toward deciding the AFC West.

The Chiefs placed wide receiver Josh Gordon on the list Monday and defensive tackle Chris Jones on it Tuesday. All three of them played in Sunday's win over the Raiders, which kept Kansas City a game ahead of the Chargers in the division.

There is an outside chance Gordon or Jones could play if they return two negative tests 24 hours apart, while rookie Nick Bolton and veteran linebacker Ben Niemann should get the majority of Gay’s snaps in Los Angeles.

Asked about the recent COVID-19 outbreak across the league, Chiefs coach Andy Reid said Tuesday: "We try to talk to them at least once a week about it. It seems like it’s every day, but it’s probably once or twice a week just to remind them about it — who you hang with, where you go, and so on and so forth.”

The Chiefs had been among the best in the NFL at steering clear of outbreaks. They had only placed four players on the COVID-19 list before this week, and the most significant came when Tyrann Mathieu missed the season opener.

Mathieu said leadership has been particularly important in battling complacency with COVID-19 restrictions.

The Chiefs also ruled out cornerback L'Jarius Sneed, who returned to the team Tuesday but has not practiced since his oldest brother was killed in a stabbing late last week. Sneed missed the game against Las Vegas to spend time with his family.

His absence should be eased by the return of Rashad Fenton, who was a full participant in practice after missing last week's game with a knee injury. The Chiefs also can lean on Mike Hughes, who parlayed additional playing time against the Raiders into a team-high nine tackles, two forced fumbles and one recovery to earn AFC Defensive Player of the Week honors.

“My mindset is always to come wherever the team needs me,” Hughes said this week. "That is how I try to approach the game, no matter where they try to put me. It is going to help the team. That is all that matters.”

Andrew Wylie, who was already playing in place of injured right tackles Mike Remmers and Lucas Niang, practiced fully this week before showing up on Wednesday's injury report as questionable for the Chargers. Niang has been out several weeks with a rib injury, but he logged two full practices this week and should be available.

The Chiefs (9-4) already have lost to the Chargers (8-4) once this season, which means another loss Thursday night would not only forge a tie atop the AFC West but give Los Angeles the head-to-head tiebreaker.

Kansas City has won the past five division titles and is tied with the Patriots and Titans for the best record in the AFC.

“You want to keep building as the season goes on,” Chiefs quarterback Patrick Mahomes said. “I think the defense is playing really good right now and the offense — some games are great and some games are just average. So for us, it's going to be us going in to play a good defense that we're playing on Thursday and playing our best football. We understand it's going to be a fight, and we have to go out there and play our best football if we want to win.”