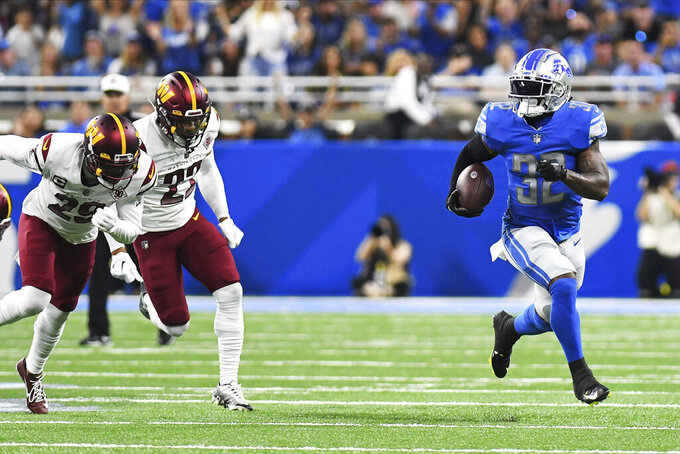 Detroit Lions running back D'Andre Swift (32) runs the ball during the first half of an NFL football game against the Washington Commanders Sunday, Sept. 18, 2022, in Detroit. (AP Photo/Lon Horwedel)

Jonathan Allen wanted to watch film of the Washington Commanders' loss at the Detroit Lions before singling out what went wrong with the defense.

After doing just that, coach Ron Rivera saw a clear problem: too many big plays allowed. D'Andre Swift ran for 50 yards, Amon-Ra St. Brown gained 58 on a jet sweep and 49 on a pass from Jared Goff, and it added up to a 36-27 Lions' win that has the Commanders again looking at their defense as a weakness to shore up, rather than a strength.

“The biggest culprit of the day was we gave up opportunities to not allow those plays,” Rivera said Monday. “It’s that old thing that this game’s gonna come down to six plays you make or you don’t make. Well, there were six plays they made on their offensive side alone that really gave us trouble.”

Detroit's offense racked up 425 yards, and St. Brown even said he and his teammates knew what was coming defensively from Washington. Commanders safety Darrick Forest lamented the same thing, leading to plenty of debate over what Rivera and defensive coordinator Jack Del Rio could have done differently and what might be adjusted before NFC East rival Philadelphia visits in Week 3.

“I’m not a fan of putting a lot of things on the coaches,” said defensive tackle Jonathan Allen, who played through a hamstring injury and expects to go against the Eagles. "At the end of the day, we’re players and we’ve got to be the ones executing. I could’ve been better and will do better myself. Sure, I guess if you want to go that route, I guess you can say that. But, to me, that’s not really something I’m thinking about.”

Rivera similarly did not think scheme was to blame for the big plays allowed and instead pointed to a lack of individual execution. A missed assignment was the problem on Swift catching the ball, falling down but then getting up and running for a 22-yard touchdown, Rivera said.

There were plenty of other holes that Goff, Swift and the Lions were able to exploit, which isn't exactly encouraging knowing the Eagles — who put up 38 points in Detroit — are up next.

“Obviously we want to play better, and we’re going to be better, but we’re onto Philadelphia,” Allen said.

Carson Wentz became the first quarterback since at least 1950 to throw for three-plus TDs and 300-plus yards in each of his first two starts with a team. Wentz was slow to get going at Detroit and had his hiccups in the season opener against Jacksonville, but at least so far he's not the reason for Commanders' struggles.

In addition to defense, especially against the run, the rushing offense is now a point of concern. Starting back Antonio Gibson was limited to 2 yards a carry, and of Washington's 88 on the ground, 23 belonged to Wentz and 21 to receiver Curtis Samuel.

Too many three-and-out drives early contributed to making the Commanders more pass-heavy than they would like.

“When that happens, you don’t get a chance to establish much because we really didn’t get into a rhythm,” Rivera said. “We got it going in the second half, mostly because we were having success throwing the ball and then we had a little success running it, which made our play action a little more effective.”

Rookie receiver Jahan Dotson caught a touchdown pass in his NFL debut and was again an impact player against Detroit. He had 59 yards receiving, including a 40-yarder from Wentz that helped Washington attempt a comeback in the second half.

Joey Slye missed an extra point in the fourth quarter. Rivera expressed full confidence in Slye, who was 6 of 6 on field-goal attempts with Washington last season, though it's a position worth watching if things go sideways.

Starting center Chase Roullier is expected to go on injured reserve for the short term with a right leg injury, Rivera said. That means Roullier will miss at least the next four games.

Wes Schweitzer is next to fill in there, though he missed the Lions game with a hamstring injury. Backup center Tyler Larson remains on the physically unable to perform list, so waiver pickup Wes Martin would be behind Schweitzer on the depth chart.

2 — First downs by the Commanders in the first half against Detroit, which contributed to the defense getting worn down and a 22-0 halftime deficit.

Watch the Eagles against the Minnesota Vikings on Monday night with an eye on slowing down another high-powered offense. Philadelphia opened as a 4-point favorite for the Week 3 game at Washington on FanDuel Sportsbook.