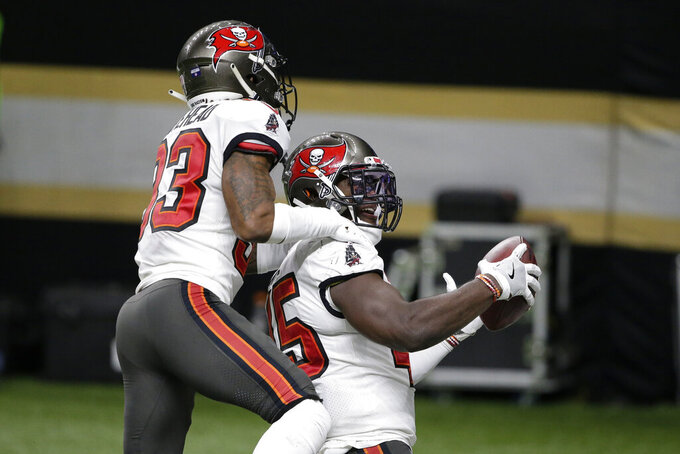 Tampa Bay Buccaneers inside linebacker Devin White, right, celebrates after his interception with cornerback Sean Murphy-Bunting (23) against the New Orleans Saints during the second half of an NFL divisional round playoff football game, Sunday, Jan. 17, 2021, in New Orleans. (AP Photo/Butch Dill)

TAMPA, Fla. (AP) — Tom Brady’s quest for a seventh Super Bowl ring continues, thanks to a young defense that’s regained its swagger when the Tampa Bay Buccaneers needed it most.

The Bucs (13-5) advanced to the NFC championship game for the first time in 18 years, with Brady outplaying Drew Brees with plenty of assistance from a rejuvenated defense that forced four turnovers in a 30-20 divisional playoff victory over the New Orleans Saints.

Brady threw for two touchdowns and ran for a third, finishing scoring drives of 3, 40 and 20 yards set up by takeaways by a unit many felt would be a liability in the third meeting of the season between the NFC South rivals.

“They played incredible,” said Brady, who is headed to his 14th conference title game — first in the NFC.

“This team has been doing that all year at different times,” the 43-year-old quarterback added. “The defense has picked us up, some weeks the offense has been a little bit better. Special teams has been so consistent. The way the defense played (Sunday), they were spectacular.”

New Orleans had won five straight over Tampa Bay, including a pair of lopsided wins this season.

While the Bucs led the NFL in run defense for the second straight year, a young secondary featuring three starters in their first or second seasons seemed to regress during a stretch in which Tampa Bay dropped three of four games in November.

Despite going 4-0 over the final month of the regular season and beating Washington in the NFC wild-card round, questions persisted about the pass defense heading to New Orleans, where Devin White, Sean Murphy-Bunting and Mike Edwards had interceptions and rookie Antoine Winfield Jr., forced a fumble that White scooped up to position Brady to throw a tying TD pass in the third quarter.

“We’ve been fighting adversity all year ... battling the naysayers and those that say we can’t do things,” Murphy-Bunting said.

“I know one thing,” White, a second-year linebacker who was the fifth overall pick in the 2019 draft, added. “We might be young, but we can get after it when we’ve got our minds set to it.”

Brees was limited to 134 yards and one TD passing, while Saints star receiver Michael Thomas was held without a catch. NFL touchdown leader Alvin Kamara had 105 yards from scrimmage, but failed to get into the end zone.

New Orleans scored early in the third quarter to take a 20-13 lead. Four possessions the rest of the way ended fumble, punt, interception and interception.

Now, it’s on to Green Bay for a matchup against Aaron Rodgers and the Packers. The Bucs will need another strong defensive performance.

"It's hard to get to this point," Brady said. "There’s nothing guaranteed from this point forward, but we’ve got to go out there and we’re going to have to play our very best to beat one of the best teams in the league.”

A huge part of advancing to the NFC championship game for the fourth time in franchise history was Brees turned the ball over and Brady didn’t after throwing five of his 12 interceptions against the Saints during the regular season. The Bucs have won six straight since their bye week in early December, and they've only turned the ball over twice during that stretch.

Although Brady lauded the overall consistency of the special teams this season, New Orleans' Deonte Harris returned a punt 54 yards to set up an early field goal. Minutes later, Harris had a 67-yarder for an apparent touchdown nullified by penalty.

When it looked as if New Orleans might have an opportunity to take control of the game, Winfield — son of former NFL cornerback Antoine Winfield, Jr. — forced the third-quarter fumble that shifted momentum to Tampa Bay’s favor for good.

“I can’t say enough about him,” coach Bruce Arians said. “To me, he’s the defensive rookie of the year.”

Receiver Antonio Brown suffered a knee injury against the Saints. He had a MRI on Monday.

One, as in one more road victory needed to become the first team to appear in a Super Bowl in its home stadium. This year’s NFL title game will be played at Raymond James Stadium in Tampa, Florida, on Feb. 7.

A chilly date with the Packers in Green Bay, where the weather forecast is for temperatures in the mid-20s and snow.

“You’ve just got to have some mental toughness, wear some warm clothes and be ready to go,” Brady said. “We’ll be prepared. The team that plays the best is going to win.”