COVID-decimated Washington runs out of gas in loss to Eagles 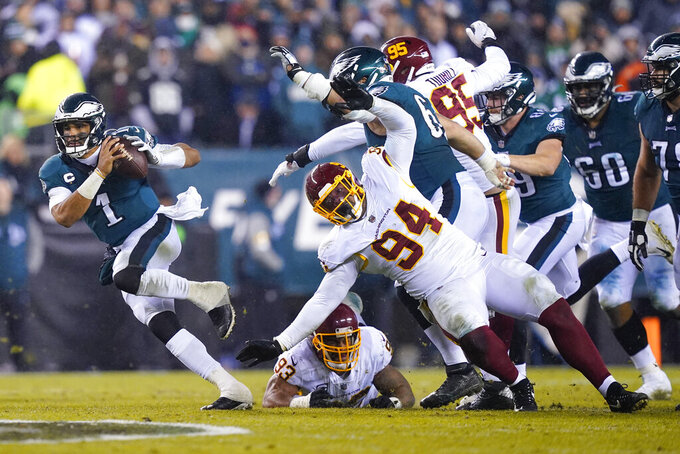 Philadelphia Eagles quarterback Jalen Hurts, left, runs the ball during the second half of an NFL football game against the Washington Football Team, Tuesday, Dec. 21, 2021, in Philadelphia. (AP Photo/Matt Slocum)

PHILADELPHIA (AP) — Playing with a quarterback who signed four days earlier and missing a handful of starters because of a coronavirus outbreak, Washington could not keep up with the well-rested Philadelphia Eagles.

After jumping out to a 10-point lead, Washington ran out of gas in a 27-17 loss Tuesday night. The Eagles ran all over an opponent depleted by COVID-19 protocol absences, which came at the worst possible time in the middle of a playoff chase and contributed to a second consecutive defeat.

"We’re not going to blame COVID for what happened," defensive tackle Jonathan Allen said. “In the NFL you get paid to handle adversity. ... We didn’t do our job and we got embarrassed.”

At one point the team had 23 players on the NFL’s COVID-19/reserve list, and even with the game pushed back two days, this was not close to a complete roster.

Washington didn't have either of its top two quarterbacks, Taylor Heinicke or Kyle Allen, was missing 2020 All-Pro guard Brandon Scherff and starting center Tyler Larsen on the offensive line and cornerback Kendall Fuller and safety Kamren Curl on defense.

After the team found out mid-afternoon that neither Heinicke nor Allen cleared virus protocol, Garrett Gilbert, who signed Friday, started at quarterback. Gilbert completed nine of his first 13 passes and finished 20 of 31 for 194 yards and led two touchdown drives.

“Less than ideal circumstances for all the guys in there," said Gilbert, who was making his first appearance since last season with Dallas. “I was really proud of the way everyone fought tonight. Certainly didn’t get the result we wanted and obviously that’s tough as every one’s important this time of year. But I was really proud of our group for fighting through everything that we faced this week and giving ourselves a chance.”

Coach Ron Rivera lamented missed opportunities against the Eagles, most notably “not stopping them and not scoring.”

Washington had a 10-0 lead after the first quarter, but gradually wore down as second- and third-string players were exploited by Philadelphia on either side of the ball.

“We were hoping we could get through it,” Rivera said. “We had some momentum early on and we couldn’t capitalize on the momentum. You can’t let good teams stay around. If you get an opportunity, you got to make plays and we didn’t do that.”

Washington fell to 6-8 and likely has to win two of its final three games if not all of them to secure an NFC wild-card spot. The division-leading Dallas Cowboys are up next on the road after a short week of recovery, and now Rivera will try to refocus his team on the difficult path ahead.