Darnold practices fully, on track to start Sunday for Jets 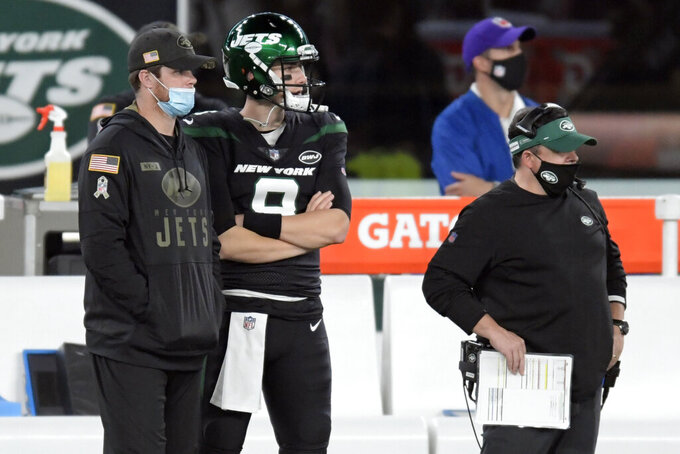 FILE - In this Monday, Nov. 9, 2020, file photo, New York Jets quarterback Sam Darnold, left, looks on from the sidelines during the first half of an NFL football game against the New England Patriots in East Rutherford, N.J. Darnold could be getting closer to returning to the huddle. The Jets quarterback was expected to be limited in practice Wednesday, but there's optimism Darnold's injured right shoulder might be healed in time to play against the Miami Dolphins on Sunday at home. (AP Photo/Bill Kostroun, File)

Darnold missed the 0-10 Jets' past two games with a shoulder injury, his second since October. He had been working in an interval throwing program since last week and was a limited participant in practice Wednesday.

Coach Adam Gase had expressed optimism that Darnold might be able to play Sunday, and the quarterback's upgrade on the injury report Thursday is a good indication that he could return.

The 23-year-old quarterback Darnold said Monday that his arm felt good, but he and the team would see how things progressed this week. He and Gase have said the main concern is whether the shoulder will be able to withstand a hit during a game.

That is something, Gase acknowledged, that will be difficult to gauge and the Jets want to make sure if he does take a hit that he isn't lost for the game early on.

Darnold was initially injured against Denver on Oct. 1, when he sprained the AC joint in the shoulder when his right arm took the brunt of the impact on a tackle. He reinjured it at Kansas City on Nov. 1 and missed the next two games.

Barring a setback Friday, it appears Darnold will be in line to make his return to try to help the Jets to an elusive victory.

Tight end Chris Herndon was a full participant after being limited by a back ailment Wednesday.