Darnold's stock as a starting NFL QB continues to drop 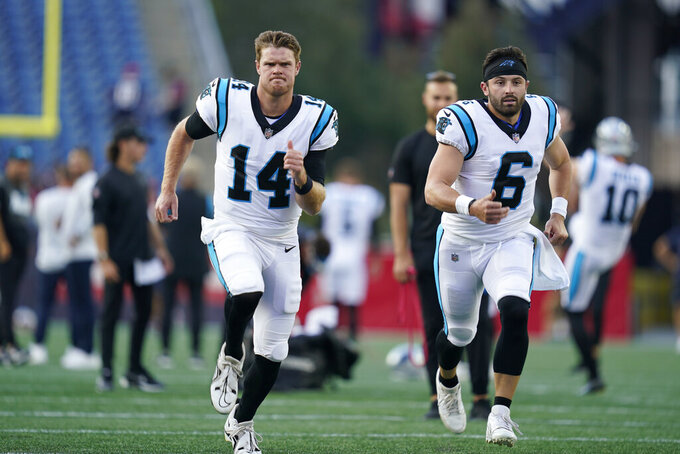 CHARLOTTE, N.C. (AP) — Four years ago Sam Darnold was the toast of New York City, the No. 3 overall pick in the NFL draft and the designated savior of the Jets franchise.

Now, he’s an $18.8 million backup quarterback for one of the league’s worst teams with an uncertain football future.

Darnold’s stock has plummeted in recent years and it took yet another turn for the worse on Monday when the Carolina Panthers chose Baker Mayfield as their starting quarterback.

For the first time since joining the league, Darnold enters the regular season as a backup.

For now, Darnold said he’s not focused on what the future holds — he becomes an unrestricted free agent after the season — and his main roles are to support Mayfield while also being ready to play if his name is called.

The Panthers knew it would have been a highly unpopular decision with their fanbase to run Darnold out as the starting QB on Sept. 11 against the Cleveland Browns after a season in which he went 4-7 as the starter with 13 interceptions and nine touchdowns for the league's 30th-ranked offense.

So the focus of the offseason became about finding his replacement.

Behind the backing of owner David Tepper, the Panthers made a strong push to acquire QB Deshaun Watson in the offseason. When that fell through they drafted quarterback Matt Corral from Ole Miss in the third round and turned their attention to Mayfield, eventually landing the disgruntled quarterback after the Browns agreed to eat $10.5 million of his contract.

Panthers coach Matt Rhule billed the Mayfield-Darnold battle as an “open competition" heading into training camp, but it never felt that way even as the two QBs split reps on a daily basis.

It always felt as if it was Mayfield's job to lose.

And the No. 1 overall pick in 2018 did nothing to lose it, regularly outperforming Darnold at practice and impressing coaches with how quickly he picked up coordinator Ben McAdoo's offense.

Darnold said he never allowed himself to view the QB battle as being predetermined.

“If I would have focused on what I needed to do to beat him out, that just would have been a waste of brain space for me," Darnold said. "I really did go out there every single day and give it my all. It just didn’t go my way.”

Rhule has repeatedly praised Darnold for taking a team approach and being a professional throughout the decision-making process.

“Both of those guys are really important,” Rhule said. “I believe in both guys. I believe in who Sam Darnold is. I believe in how hard he’s worked and how professional he’s been. At the end of the day, we felt like Baker has made a lot of progress in a short amount of time.”

Darnold said Rhule gave him a fair opportunity to win the job.

Said Darnold: “As a quarterback, an athlete and a man, you just want to hear the truth and I appreciated the way he handled it.”

So now Darnold must bide his time, waiting for an opportunity to start again. He remains confident it will happen.

“Absolutely,” Darnold said. “I believe I have all of the traits, all of the attributes and the mindset to be a starter in this league.”