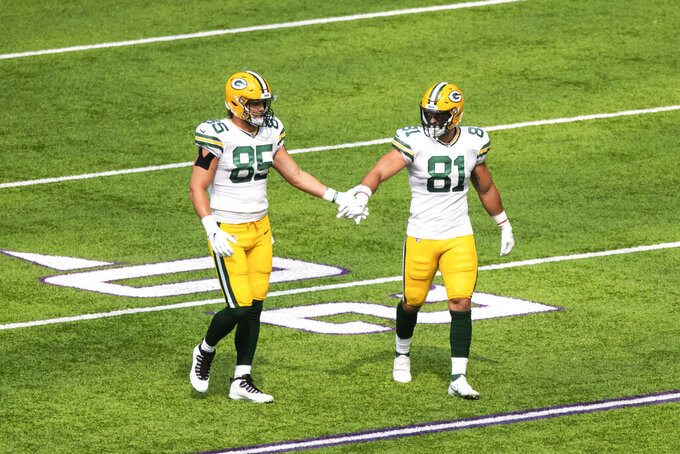 Now he’s back on the practice field and eager to showcase the versatility that helped him contribute immediately last year before injuries wrecked his rookie season.

Deguara said he leaned on his faith, family and friends to help him. The 2020 third-round pick from Cincinnati also bonded with teammate David Bakhtiari, the All-Pro left tackle who tore his ACL on Dec. 31.

While Bakhtiari’s status for the start of the season remains uncertain, Deguara returned to practice last week.

“There’s mental hurdles like I stated throughout the whole process, and trusting your knee and remembering what happened and just getting back on the field and not thinking about it is a big step in the process,” Deguara said. “So getting out there in practice, I’m not thinking about it at all. I feel like I used to feel and I’m just happy to be back out there.”

Deguara doesn’t know whether he will play in the Packers’ preseason opener Saturday against the Houston Texans, but he already has shown he’s ready to rejoin Green Bay’s diverse collection of tight ends.

“Deguara looks fantastic,” Packers coach Matt LaFleur said. “ It looks like he picked up right where he left off last season.”

Last year, Deguara made a great first impression with his wide array of skills. Rather than specializing in blocking or catching, Deguara does both. He also can line up as an H-back.

Deguara kicked off his NFL career by starting and playing 24 snaps in a season-opening victory at Minnesota. He caught a 12-yard pass and blocked out two defenders to pave the way for a 19-yard run by Allen Lazard that day.

“He’s just such a savvy, smart football player,” LaFleur said. “There’s so many things he does that’s tough to coach.”

Ankle and shin injuries caused him to miss the next two games. Deguara returned for a Monday night victory over the Atlanta Falcons on Oct. 5 but tore the ACL in his left knee in the final stages of that game.

Deguara said “deep down” he realized the likely severity of the injury as soon as it happened.

“But obviously I was shocked and didn’t want to believe it and a lot of emotions rushing through your head,” Deguara said. “The whole night’s just kind of a blur. You try not to remember those times and just remember the good times you had.”

Deguara now is back to give the Packers one more option at tight end.

Robert Tonyan is the rising star of the group who caught 11 touchdown passes last year. Marcedes Lewis has adopted more of a blocking role as the elder statesman entering his 16th season.

Dominique Dafney is the uplifting story; he was working at a rooftop patio ball last fall before working his way to the active roster for both of Green Bay’s playoff games. The Packers also return 2019 third-round pick Jace Sternberger, who is suspended for the first two games of the season after violating the NFL’s substance abuse policy.

And it’s even better now that Deguara has recovered.