Despite loss, Minshew continues to bring fight for Jaguars 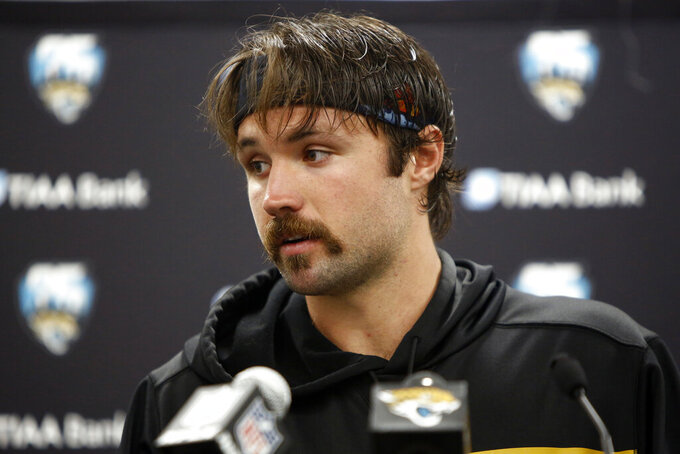 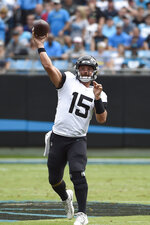 CHARLOTTE, N.C. (AP) — There's one thing you can say about Gardner Minshew: He never gives up.

Despite a 34-27 loss to the Carolina Panthers , the Jacksonville Jaguars rookie quarterback turned in another encouraging performance, completing 26 of 45 passes for 374 yards with two touchdowns . The Jaguars offense racked up 507 yards against the league's fourth-ranked defense, which caught the attention of Panthers coach Ron Rivera.

"They have a young dynamic quarterback," Rivera said. "He's going to be a special one in this league I think."

The Jaguars never led, but they were never out of the game either in large part due to Minshew's resilience.

He seemingly had an answer for everything the Panthers threw at him, finding ways to keep plays alive with his feet while playing with the poise of a veteran quarterback and a never-say-die mentality.

"You feel like you always have a chance when he's in there," said Jaguars coach Doug Marrone. "You feel like he's going to make a play. I think sometimes you see him running around and moving around and ducking and going and eventually, that stuff — in this league — is going to catch up to you where they're going to knock the ball out. Sometimes you're going to make plays, sometimes you're not. We just appreciate that the guy is out there giving us everything he has."

He made several on Sunday.

He fumbled three times, twice on sacks and had one returned 56 yards for a touchdown by Brian Burns. But even that wasn't completely his fault as Panthers defensive end Mario Addison pushed blocker Andrew Norwell into Minshew, causing the ball to come out.

Burns later ran down Minshew from behind late in the fourth quarter, recording a sack and fumble. The other fumble came on a miscommunication on a handoff early in the game.

"Those are all on me, that can't happen," Minshew said. "When stuff like that happens, sometimes you don't give yourself a chance to win. That's what I feel like we did, what I did."

Still, Minshew didn't give up.

Down 34-27 with 1:45 left and with only one timeout, he led the Jaguars from their 5 to the Carolina 24 battling plenty of crowd noise and a stiff pass rush. But Minshew calmly converted five first downs, including a 26-yard strike over the middle to DJ Chark on third-and-10. But he eventually ran out of time when his pass toward the end zone was knocked down by Luke Kuechly on the game's final play.

Minshew is the first player in NFL history to throw for at least 200 yards passing with a passer rating of at least 95 in each of his first five career games.

Chark, who had eight catches for 164 yards and two scores , said he believes better things are ahead for the Jaguars (2-3), who remain in contention in the unpredictable AFC South.

"I feel like once we get our stride going and we're feeling it, nobody is going to stop us," Chark said. "We got down pretty early and there are some things that the offense has to work on but there's never been a point this season — and we lost two games — there's never been a point in any of those games where anyone has given up and that's huge."