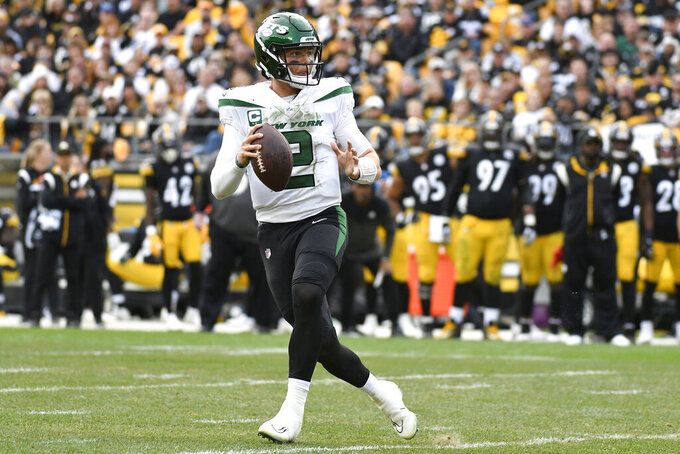 OPENING LINE: Dolphins by 3, according to FanDuel SportsBook.

TURNOVER DIFFERENTIAL: Dolphins even; Jets minus-2.

DOLPHINS PLAYER TO WATCH: The running backs. Raheem Mostert rushed 15 times for 69 yards as Miami’s lead running back last week. Miami hasn’t done much in the run game so far this season, but Dolphins coach Mike McDaniel has spoken about letting the game dictate the rushing attack. The Dolphins could possibly lean on it a bit more this week, leaving both Mostert and Chase Edmonds potentially with large roles.

JETS PLAYER TO WATCH: QB Zach Wilson. He made his season debut last week after missing three games following a preseason knee injury. He completed just eight of his first 24 passes for 124 yards through three quarters, but went 10 of 12 for 128 yards while leading two touchdown drives in the final period of the Jets’ comeback win. Whether he can build off that fourth-quarter performance will be key.

KEY MATCHUP: Dolphins WRs Tyreek Hill and Jaylen Waddle vs. Jets CBs D.J. Reed and Ahmad “Sauce” Gardner. The speed of the two WRs — if they play; both were listed as questionable — will be a big test for the Jets' starting cornerbacks who are off to a solid start. Jets coach Robert Saleh compared Hill and Waddle, combined with Mostert and the Dolphins' tight ends, to a “4x100 relay team.”

KEY INJURIES: Dolphins QB Tua Tagovailoa (concussion) is out after being injured against Cincinnati. ... Hill (quadriceps) and Waddle (groin) were limited in practice Thursday and Friday. ... CB Xavien Howard (groin) was also limited Friday and listed as questionable. ... LT Terron Armstead (toe) didn't practice all week and is questionable to play. ... CB Byron Jones (Achilles tendon) will not begin the 21-day practice window to come off PUP. McDaniel said Jones didn’t have any major setbacks, but isn’t progressing as fast as the team hoped. ... Jets rookie RT Max Mitchell (knee) and LB Quincy Williams (ankle) are out. ... LT Duane Brown (shoulder) and DE Vinny Curry (hamstring) started to practice this week. Brown said he was “good to go” to play.

SERIES NOTES: The AFC East rivals have played 113 times, including a postseason game won by Miami, and the Dolphins lead the series 57-55-1 after sweeping two games last season. ... The Dolphins have won four straight and eight of the past nine meetings. ... The only time they faced each other in the playoffs was Jan. 23, 1983, when Miami won 14-0 in the AFC championship game before losing to Washington in the Super Bowl. On a muddy field at the Orange Bowl, A.J. Duhe intercepted Richard Todd three times and returned one for a score. Todd finished with five INTs. ... In 1986, the Jets won 51-45 in overtime on Ken O’Brien’s 43-yard TD pass to Wesley Walker. O’Brien threw for 479 yards and three TDs with one INT, while Miami’s Dan Marino had 448 yards, six TDs and two INTs. ... In 1994, Marino led the Dolphins to 22 unanswered points capped by his fake spike with 22 seconds left when he threw a 5-yard TD pass to Mark Ingram for the winning score in a 28-24 victory. ... The Jets had a big comeback of their own in 2000 with the “Monday Night Miracle.” New York erased a 30-7 fourth-quarter deficit as Vinny Testaverde threw four TD passes in the period, including a catch by offensive lineman Jumbo Elliott for the tying score. John Hall’s 40-yard field goal in OT gave the Jets a 40-37 victory.

STATS AND STUFF: The Dolphins are looking for their first 4-1 start since 2003, when they finished 10-6 under Dave Wannstedt but missed the playoffs. ... A victory would give Miami its 500th overall win, including playoffs. ... Teddy Bridgewater will start for Miami with Tua Tagovailoa sidelined with a head injury. Bridgewater, who was in training camp with the Jets in 2018, has started games for four NFL teams: Minnesota, New Orleans, Carolina and Denver. With Sunday’s start, he will become the 22nd quarterback in league history to start for five teams — and the first since Nick Foles accomplished the feat in 2020 while with Chicago. ... In three career games against the Jets, Hill has caught 13 passes for 309 yards with four touchdowns. He had a 79-yard touchdown catch against the Jets in 2017 while with the Kansas City Chiefs. Hill came very close to joining the Jets in the offseason before agreeing to be traded to the Dolphins. ... TE Mike Gesicki has played eight career games against the Jets and has 19 receptions for 229 yards and one touchdown. ... The Jets are looking for their first 3-2 start since 2017, when they went 5-11 under Todd Bowles. ... New York has lost 12 straight against AFC East opponents, with its most recent win over a division rival coming against Buffalo in Week 17 of the 2019 season. ... Wilson became the first Jets quarterback to catch a touchdown pass when he was wide open and grabbed wide receiver Braxton Berrios' 2-yard toss. ... According to Sportradar, New York's Alijah Vera-Tucker is one of 42 players to start at three or more offensive line positions in his first 20 NFL games among players to debut since 2006. Vera-Tucker started at left tackle last week after previously starting this season at right guard and playing left guard as a rookie. He's the only such Jets player and one of four first-round draft picks to accomplish the feat: Chicago's Gabe Carimi, Cleveland's Cameron Erving and New Orleans' Andrus Peat. ... The Jets had four interceptions last week — two by Lamarcus Joyner and one each by Michael Carter II and Jordan Whitehead — for their most in one game since getting five in the 2018 season opener at Detroit.

FANTASY TIP: Jets TE Tyler Conklin has been a go-to guy, especially late in games, and leads the team with 21 receptions for 192 yards and a touchdown. It initially appeared Conklin would be in a timeshare at tight end with C.J. Uzomah, but he outsnapped him 57 to 31 at Pittsburgh.