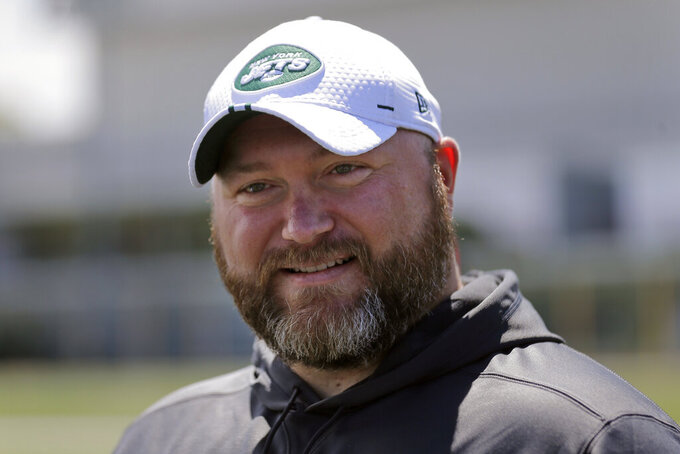 FILE - In this June 11, 2019, file photo, New York Jets general manager Joe Douglas greets reporters during a practice at the team's NFL football training facility in Florham Park, N.J. Douglas entered his first full offseason running the New York Jets armed with a clear plan. The general manager is setting a tone in free agency unlike that of the often free-spending Jets of recent years. He has made mostly modest deals with second-tier free agents with upside while trying to retool and restructure the roster. (AP Photo/Seth Wenig, File)

NEW YORK (AP) — No big splash. Not a lot of flash. No breaking the bank.

Joe Douglas entered his first full offseason running the New York Jets armed with a clear plan. And, so far, the general manager is sticking to it. He has been busy improving his team by filling serious needs and building roster depth without compromising the franchise’s future with salary cap-crippling deals.

Less than two weeks into free agency, Douglas is setting a tone unlike that of the often free-spending Jets of recent years.

Big deals to big names such as Le’Veon Bell, C.J. Mosley, Trumaine Johnson and Darrelle Revis highlighted previous offseasons. Douglas has instead operated with prudence and patience — even as fans nervously kept refreshing their Twitter feeds waiting for moves during the first few days of the NFL's new league year. He has made mostly modest deals with second-tier free agents with upside while trying to retool and restructure the roster for coach Adam Gase and defensive coordinator Gregg Williams.

No bidding wars with other teams. And, no bidding against themselves.

“I think you have to choose the right targets,” Douglas said at the NFL combine in Indianapolis last month. “First, you have to make sure they fit with what you’re trying to do from a team-building, character perspective — how they fit with Adam and Gregg’s scheme. And if the right opportunity presents itself, you can’t be afraid to pull the trigger.

“We’re going to have different tiers of free agents, with what money they’re going to make. But it’s going to be important for us to choose the right person.”

CEO Christopher Johnson believes he did exactly that when he made the unconventional decision to fire GM Mike Maccagnan last June — after free agency and the draft — and hired the highly regarded Douglas away from Philadelphia.

Douglas spent the next several months watching, evaluating, learning and preparing. After a 7-9 season filled with injuries and inconsistency on the field, the GM knew all eyes would be on him this offseason.

And now, Douglas is putting his fingerprints on the franchise. Even if it’s still somewhat under the radar.

Douglas has three Super Bowl rings, including two with Baltimore where, as a scout, he watched Ozzie Newsome build the Ravens into an annual playoff contender.

Douglas spent three seasons in Philadelphia as the vice president of personnel, playing a key role in shaping the Eagles' Super Bowl-winning squad to cap the 2017 season.

Douglas has certainly seen the blueprints for success, and he stressed the need to protect quarterback Sam Darnold. So, revamping the offensive line was a priority entering free agency.

In just five days, Douglas switched out the big boys up front. And, it wasn’t by going after big-ticket blockers such as Jack Conklin or Trent Williams, although there was interest. Instead, he re-signed left guard Alex Lewis for three years and $18.6 million, and then agreed to terms with left tackle George Fant (three years, up to $30 million), center Connor McGovern (three years, $27 million), guard Greg Van Roten (three years) and guard/center Josh Andrews (one year).

That's significant money, but not huge.

Cornerback was also at the top of the offseason wish list, and, like on the offensive line, he made massive changes.

Douglas first re-signed Brian Poole to a one-year, $5 million fully guaranteed contract, keeping Williams’ primary nickel/slot guy in the mix. But then the Jets released the disappointing Trumaine Johnson, who was supposed to be a cornerstone of the defense when he signed a five-year, $72.5 million contract in 2018. Douglas also cut Darryl Roberts, who started several games over the last two seasons but was due to count $6 million on the cap this season.

Needing a starting-caliber cornerback, Douglas signed Pierre Desir to a one-year deal worth up to $5.5 million a day after he was cut by Indianapolis. That came after other teams spent big money on the likes of Chris Harris Jr. (Chargers — two years, $17 million), Byron Jones (Dolphins — five years, $82 million) and James Bradberry (Giants — three years, $45 million).

There hasn't been all good news, though. In particular, the Jets lost speedy wide receiver Robby Anderson to Carolina on a two-year, $20 million contract. But Douglas bounced right back and got his projected replacement a few hours later by bringing in Breshad Perriman on a one-year deal worth up to $8 million and including $6 million guaranteed.

New York re-signed outside linebacker Jordan Jenkins and made several depth moves by bringing back Neville Hewitt and James Burgess, and agreeing to terms with former Ravens inside linebacker Patrick Onwuasor on a one-year contract.

Douglas still has plenty of work to do, still lots of needs to be filled. And that might be worrisome to some Jets fans who aren't close to satisfied with the current roster. Pass rusher Jadeveon Clowney is still available, and so are the likes of Everson Griffen and Logan Ryan. While unlikely, there still could be a headline-making move before the focus turns to the draft.

And, that's where Douglas will really begin to truly make his mark on the franchise, starting with the No. 11 overall pick and building a foundation for the future.

“Making smart decisions and being opportunistic," Douglas said, "and trying to improve this roster the best way we can.”