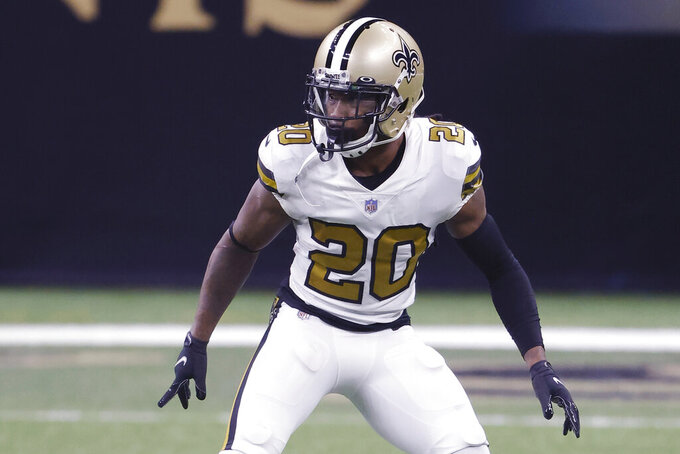 NASHVILLE, Tenn. (AP) — The Tennessee Titans failed in their attempts to improve their pass rush in free agency a year ago.

Bud Dupree, their newest pass rusher, is ready to do everything possible to help Tennessee fix that issue once and for all.

"Definitely, I’m going to go out and just play with my hair on fire just trying to get after the quarterback as much as I can creating pressure, trying to get the ball out, just everything I can do just to keep the train rolling man and help those guys on D,” Dupree said Friday.

The Titans introduced Dupree after agreeing to terms on a multi-year deal with the linebacker. Tennessee not only added Dupree but also brought in defensive lineman Denico Autry. The Titans also have signed cornerback Janoris “Jackrabbit” Jenkins in working to fix a defense that was one of the NFL's worst last season.

Either Dupree or Autry would have led Tennessee in sacks last season. Together they had 15 1/2, while the Titans had only 19. They were last in the NFL through 15 weeks with 15 sacks, and only four in the regular-season finale lifted them out of the cellar in that category. Harold Landry II had a team-high 5 1/2 sacks.

“Definitely I’m going to be ready in camp," Dupree said.

Dupree said multiple teams were interested after Pittsburgh chose not to use the franchise tag on him again. For someone who played at Kentucky and is a Georgia native, Tennessee is an ideal location with the Titans the kind of winning team Dupree wanted to join a year ago if he had been a free agent.

Brown played 10 games last season and had a team-high 76 tackles, a sack, an interception and two fumble recoveries before his injury. He has started 33 of 55 career games and has 9 1/2 sacks and three interceptions in that span.

The linebacker said he had multiple offers but wanted the chance to return to Tennessee and both chase a Super Bowl and boost his value for his next contract when the NFL's new TV contracts boost the salary cap back up again.

The Titans released three starters in the secondary over the past 10 days, cutting cornerbacks Adoree Jackson and Malcolm Butler and safety Kenny Vaccaro to clear salary cap space.

So far, the Titans have signed only one cornerback in Jenkins, who has started 125 of 128 games in his nine seasons with the then-St. Louis Rams, New York Giants and 15 games with the Saints over the past two seasons.

Since 2012, Jenkins ranks first in passes defensed (119), first in defensive touchdowns scored (nine) and is tied for fourth with 26 interceptions, including two or more in eight of nine seasons. He started 13 games for the Saints last season with three interceptions, one more than Jackson had in his four seasons with the Titans.

“I just feel like I was part of the missing piece," Jenkins said of the Titans. "They got a run game, control the ball, nice front, linebackers pretty good ... I feel like I can just come in and give leadership and a veteran mentality to the backend guys.”

Jenkins agreed to terms on his multi-year deal a day after the Titans landed Dupree. Jenkins now is the most-experienced cornerback on the roster, and the veteran who said he loves playing man-to-man defense said he's ready to help younger players such as Kristian Fulton, a third-round pick out of LSU last year.

The Titans ranked last in the NFL last season, allowing opponents to convert 51.8% of third downs. They also ranked 29th against the pass, giving up 277.4 yards a game.

But Tennessee has reached the playoffs three of the past four years, and that's a big attraction for Jenkins.