Eagles got a playmaker, extra first-round pick and depth 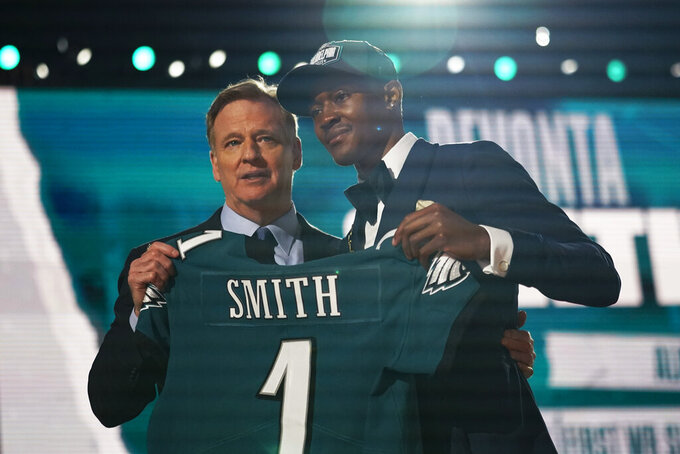 Alabama wide receiver DeVonta Smith, right, holds a team jersey with NFL Commissioner Roger Goodell after he was chosen by the Philadelphia Eagles with the 10th pick in the first round of the NFL football draft Thursday, April 29, 2021, in Cleveland. (AP Photo/Tony Dejak) 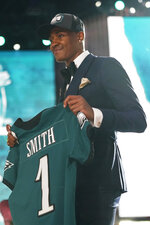 PHILADELPHIA (AP) — The Philadelphia Eagles added an extra first-round pick next year before selecting the Heisman Trophy winner, and spent the rest of the draft focused mainly on defense.

Trading up to take Alabama wide receiver DeVonta Smith at No. 10 overall after moving down from the sixth spot to the 12th easily was the highlight of Philadelphia’s draft. The Eagles got a high-ceiling offensive lineman with a long injury history when they took Crimson Tide center Landon Dickerson in the second round.

Philly began Day 3 by filling a need at cornerback, choosing Texas Tech’s Zech McPhearson. The Eagles took Memphis running back Kenneth Gainwell in the fifth round and a pair of linebackers in the seventh round: LSU’s JaCoby Stevens and Tulane’s Patrick Johnson.

Getting Smith gives Philadelphia a playmaker at a position it has struggled and hasn't had a 1,000-yard receiver since Jeremy Maclin in 2014. Smith reunites with quarterback Jalen Hurts, who played at Alabama before transferring to Oklahoma.

The Eagles fired coach Doug Pederson and traded quarterback Carson Wentz after going 4-11-1 last season, so they entered the draft looking to add talent regardless of position because they have plenty of holes.

McPhearson comes from a family of athletes. His parents and seven older siblings played college or pro sports. The 5-foot-11, 191-pound McPhearson played two seasons at Penn State and the last two with the Red Raiders. He was a team captain as a senior and had 120 tackles and four interceptions.

“Just being the youngest sibling and absorbing all the information they got and being there and learning from them has definitely helped me,” McPhearson said. “I would definitely say leaning on my brothers who played on the big stage, too, they have a lot of information and a lot of tips and keys that have helped me along my journey.”

IT’S IN THE NAME

If Gainwell gains yards well, he’ll be a big part of Philadelphia’s offense. He opted out a week before the start of last season following a funeral for an uncle, the fourth member of his family to die from COVID-19.

“I’m basically kind of like a straight-line guy,” he said. “I’m kind of just a guy that can catch the ball, run the ball, and get straight up field.”

The 6-foot-2, 307-pound Tuipulotu had 8 1/2 sacks and 15 tackles for a loss in four seasons. He didn’t start playing organized football until his freshman year in high school.

The 6-foot-2, 254-pound Jackson had 26 1/2 sacks in four seasons, including 16 1/2 the past two years. He was a finalist for the Bronko Nagurski Trophy given to the most outstanding defensive player in college football.

“I’m the guy that’s trying to come off the ball as hard as he can, trying to be violent with my hands,” Jackson said. “I definitely would describe my pass rush game as relentless.”

Stevens played safety at LSU and Johnson was an edge rusher at Tulane, but the Eagles listed both players as linebackers.

“They said they want me to be a guy to come in and be able to be a good edge rusher for them and sack the quarterback and get some hurries and rushes,” Johnson said.

Stevens said he has no preference where he plays.

“My thing is about coming in and being able to contribute any way possible, so if they have me come in and want me to play linebacker or safety, regardless of what position they want me to play, my job now is to contribute to the Philadelphia Eagles’ defense,” Stevens said.

The Eagles and three-time Pro Bowl tight end Zach Ertz seem destined for a divorce but he hasn’t been moved yet. Trading him or releasing him in June would save the Eagles about $8.5 million in cap space this offseason, so waiting one more month benefits the team from that standpoint.