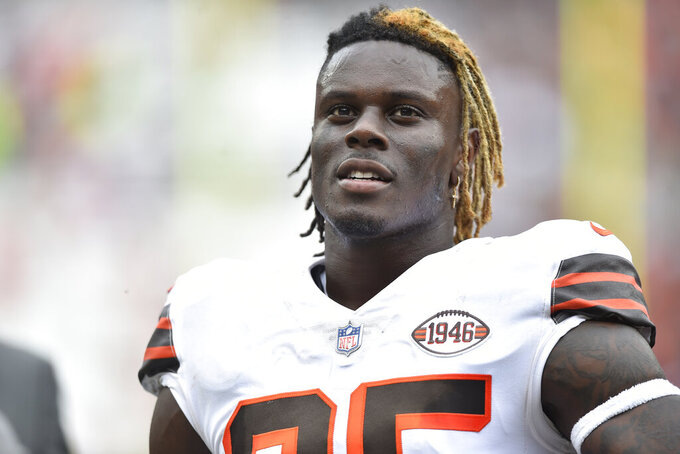 FILE - Cleveland Browns tight end David Njoku walks on the field after an NFL football game against the Chicago Bears, Sept. 26, 2021, in Cleveland. Njoku got the long-term commitment he wanted from the Browns, agreeing to a four-year contract extension, a person familiar with the negotiations told the Associated Press on Friday, May 27, 2022. The person spoke on condition of anonymity because the sides were still finalizing the package. (AP Photo/David Richard, File)

BEREA, Ohio (AP) — David Njoku has gone from wanting out of the Cleveland Browns to locking in with them.

Cleveland announced Njoku's four-year, $56.75 million contract extension on Wednesday, a deal that could take the tight end through the 2027 season.

A first-round draft pick in 2017, Njoku will be among the NFL's highest-paid tight ends without putting up elite statistics. He caught 36 passes for 475 yards and a team-high four touchdowns last season.

But the Browns believe the 25-year-old Njoku is just reaching his prime and could be on the verge of a breakout, which is why they invested in him.

"We are pleased to secure David Njoku’s presence in Cleveland with this extension,” Browns general manager Andrew Berry said. “David’s multifaceted skill set in both the run and pass game is a key component of our offensive system. His ability to generate explosive plays with his athleticism, speed and run-after-catch ability along with his productivity as a blocker on the line of scrimmage is a difficult combination to find in a single player.

"We’ve seen David grow throughout his time here and are excited to see his best football over the next several seasons.”

Two years ago, Njoku demanded to be traded after the Browns signed free agent Austin Hooper and drafted Harrison Bryant. The team didn't oblige and Njoku had a change of heart last year.

“I love it here to the core,” he said late last season. “I honestly want to be here for the rest of my career.”

By Teresa M. Walker 6 minutes ago
4 hrs ago
By Greg Beacham 5 hrs ago
6 hrs ago
By Brett Martel 6 hrs ago