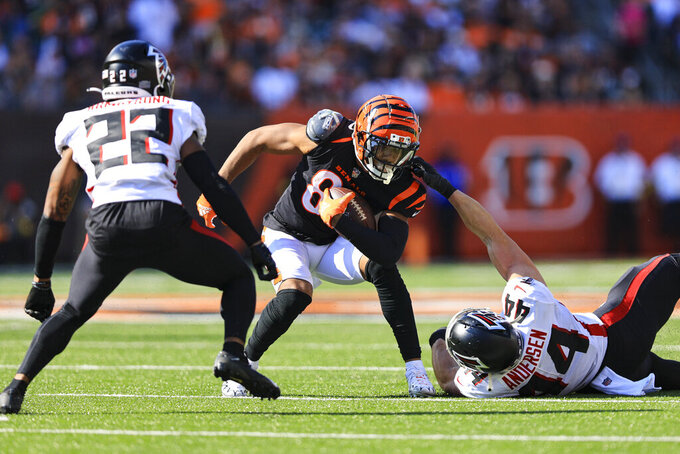 ATLANTA (AP) — The Atlanta Falcons’ depleted secondary didn’t have much of chance even before cornerback A.J. Terrell and safety Jaylinn Hawkins left with injuries during a 35-17 loss at Cincinnati.

With cornerback Casey Heyward placed on injured reserve last week and key backup Dee Alford unable to dress because of a hamstring injury, Bengals quarterback Joe Burrow had a huge advantage with wideouts Tyler Boyd, Ja’Marr Chase and Tee Higgins at his disposal against a defense that consistently struggles to rush the passer.

The result: Burrow threw for 481 yards, the 34th highest in a game in NFL history, the second-most ever against the Falcons and the third-most in Cincinnati history.

Terrell went down with an ankle sprain in the first quarter and Hawkins suffered a head injury in the fourth. Backup cornerback Mike Ford left in the second half after hurting his ankle on punt coverage.

Following those setbacks, cornerback Cornell Armstrong had to play the final three quarters and the Falcons stopped playing man coverage. Armstrong was released by the Falcons on Aug. 24 and re-signed to the practice squad on Oct. 3. He was elevated to the 53-man roster last week.

A victory would’ve given the Falcons (3-4) sole possession of first place in the underwhelming NFC South. But this game was essentially over when Cincinnati took a 28-7 lead late in the second quarter.

Atlanta scored 10 points in 39 seconds to make it an 11-point game at halftime, but the offense was shut out in the second half.

“We didn’t do a good enough job on offense,” left tackle Jake Matthews said. “If we come out better in the second half and finish the game better, it would be a different game. We didn’t give ourselves a chance to get back in it.”

The Falcons' previous three losses were decided by an average of 3.7 points, and in two of them, Atlanta rallied late to make it close. There wasn’t much of a chance of that happening this time, not with the Bengals leading 21-0 after the first play of the second quarter.

“It’s one of those situations where we’re really close to winning, get beat really bad and then get another chance to win — it’s up and down like a roller coaster,” inside linebacker Rashaan Evans said. “We want to be in a situation where we’re more persistent, where we stay steady.”

Not much for a team that hasn’t been above .500 since the end of 2017. The running game finished with 107 yards and an average of 3.7 yards per carry, but coach Arthur Smith seems too stubborn to give Marcus Mariota more opportunities to throw.

Mariota completed eight of 13 passes for 124 yards, one of them a 75-yard touchdown late in the second quarter. The team’s run-first concepts aren’t much good when an early deficit reaches double digits as it has in losses to the Bengals, Buccaneers and Rams. Smith said after the game he gave no thought to playing rookie backup QB Desmond Ridder, who has yet to take a snap this season.

The Falcons are getting a lot out of their decision to sign Evans to a $1.75 million, one-year contract. He led the defense with seven solo stops and six assists on Sunday and has a team-high 35 solo tackles and 29 assists on the season. He has three pass breakups and two fumble recoveries.

Though no fault of their own, Drake London and Kyle Pitts combined for 18 yards on four catches. The Falcons don’t stand much chance of winning when their top two receivers aren’t getting many chances.

6 — The combined targets for London and Pitts. That number must increase if Atlanta is to build any kind of consistency on offense.

It’s likely the Falcons will be without Terrell against Carolina at home this week. Hawkins has already been ruled out, and Heyward is recovering from shoulder surgery. The Panthers and third-string quarterback P.J. Walker are coming off a 21-3 win over Tampa Bay. The Falcons need to get a good feel in practice this week as to what Armstrong and the rebuilt secondary are capable of.