Falcons' Julio Jones out another game with ailing hamstring 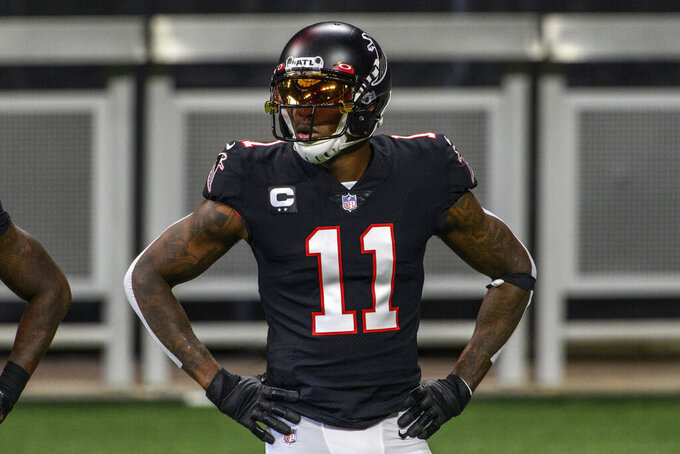 FILE - In this Sunday, Dec. 6, 2020 file photo, Atlanta Falcons wide receiver Julio Jones (11) warms up before an NFL football game against the New Orleans Saints in Atlanta. Julio Jones' nagging hamstring injury has made his value more obvious than ever for the Atlanta Falcons. Jones has missed four games this season and his status is in doubt for the game against the Tampa Bay Buccaneers on Sunday, Dec. 20, 2020. (AP Photo/Danny Karnik, File)

The team ruled Jones out for Sunday's game against Tom Brady and the Tampa Bay Buccaneers (8-5).

This will be the fifth game that Jones has missed with the hamstring issue, which first cropped up in Week 3.

Jones is assured of playing the second-fewest games of his 10-year career. He was limited to five games in 2013 by a season-ending foot injury.

Jones ranks third on the Falcons this season behind Calvin Ridley and Russell Gage with 51 receptions for 771 yards and three touchdowns.