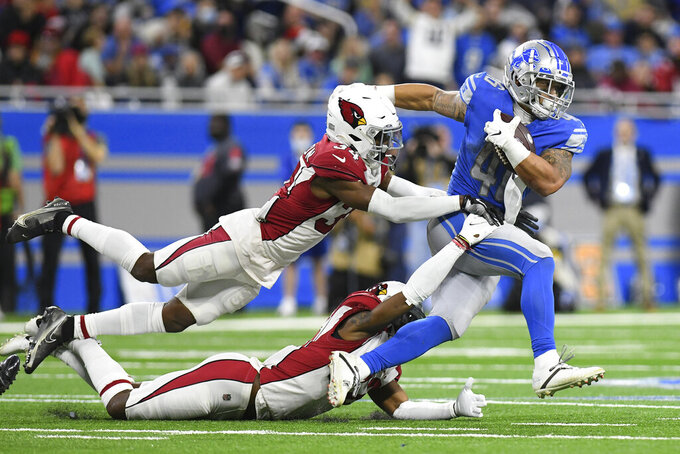 BETTING LINE: Falcons by 6, according to FanDuel SportsBook.

TURNOVER DIFFERENTIAL: Lions minus-4; Falcons minus-5.

LIONS PLAYER TO WATCH: RB Craig Reynolds. With D'Andre Swift (sprained shoulder) inactive for the third consecutive week and usual backup Jamaal Williams on the COVID-19 reserve list, Reynolds ran for a career-high 112 yards in the shocking win over Arizona last week. Swift returned to practice on Wednesday and Williams is off the COVID-19 list. Reynolds may have earned continued playing time, especially if Swift is brought back slowly.

FALCONS PLAYER TO WATCH: TE Kyle Pitts. The rookie tight end had a 49-yard catch last week, his longest of the season. Pitts has 58 catches for 847 yards and only one touchdown after entering the season with high expectations as the No. 4 overall selection in the NFL draft. A big game could leave Pitts on track for 1,000 yards.

STATS AND STUFF: The Lions are 0-6-1 on the road. The Falcons 0-5 in Atlanta. The Falcons beat the Jets in London when they were the designated home team. ... Reynolds has rushed for 195 yards the last two weeks, second most by a Lions player in his first two games with the team. Billy Sims is only other Lions player to rush for at least 80 yards in each of his first two games. ... St. Brown already has the franchise rookie mark for most games with seven or more catches (four), and is one away from matching Dorne Dibble’s 1951 mark for most games (five) in a rookie season with 70 or more receiving yards. … Through Week 15, the Lions sport the highest-scoring two-minute offense with 38 points (four touchdowns, three field goals). … Goff is in the top five in the NFL in fourth-quarter passing yards (1,061), and 1,700 of his 3,007 yards have come in the second half of games — when Detroit often is trailing … Thanks to an improved offensive line, Lions running backs have rushed for 493 yards before contact, sixth best in the NFL, and — despite all the personnel changes — are averaging 4.5 yards per rush for the first time since Barry Sanders’ final season in 1998, and just the 14th time in franchise history, with eight players having a run of 20 or more yards this season. ... Falcons QB Matt Ryan's 365 career TD passes are one behind Eli Manning's 366 for ninth place. ... Pitts (847) is the fifth rookie TE with at least 800 yards receiving. ... WR Russell Gage has at least 60 yards receiving in his last four games and at least four catches in his last five games.

FANTASY TIP: Falcons RB Cordarrelle Patterson will be looking for a bounce-back game after being held to 18 yards rushing on 11 carries last week. Patterson has 465 scrimmage yards and four TD catches in five home games. He also leads Atlanta with five TD catches. The Lions rank 28th in rushing defense and might struggle to replace Anzalone, who was the defensive captain and leader of the linebackers.

By Kyle Hightower 14 minutes ago
By Tom Withers an hour ago
By Teresa M. Walker an hour ago
4 hrs ago
9 hrs ago