Falcons still tied for NFC South lead even with limitations 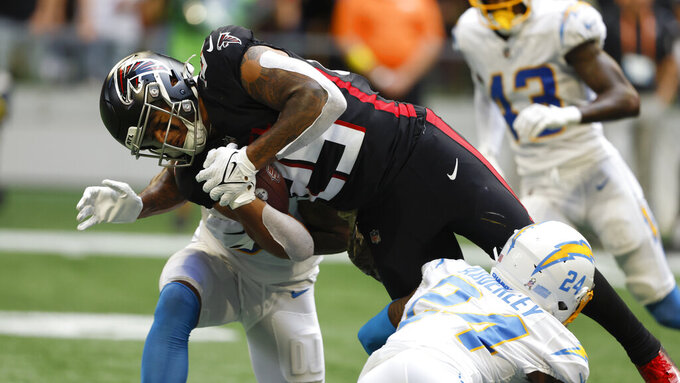 CORRECTS DATE TO SUNDAY, NOV. 6 INSTEAD OF TUESDAY, DEC. 6 - Atlanta Falcons running back Tyler Allgeier (25) dives for extra yardage as he is tackled by Los Angeles Chargers safety Nasir Adderley (24) during the second half of an NFL football game, Sunday, Nov. 6, 2022, in Atlanta. (AP Photo/Butch Dill)

ATLANTA (AP) — Nine games have revealed the Atlanta Falcons to be a team with limitations on defense and in their passing game.

That doesn't mean they can't compete in the woeful NFC South.

Second-year coach Arthur Smith has leaned on a steady running game that was strengthened by the return of starter Cordarrelle Patterson in Sunday's last-second 20-17 loss to the Los Angeles Chargers.

Defensive tackle Ta'Quon Graham had the last giveaway on a bizarre two-fumble play that helped set the stage for the Chargers' winning field goal as time expired.

Despite the loss, the Falcons (4-5) are tied with Tampa Bay atop the NFC South. Atlanta plays at last-place Carolina on Thursday night.

The Falcons ran for 201 yards, but quarterback Marcus Mariota passed for only 129 yards with no touchdowns.

When Mariota provides dual-threat contributions as another running threat in a win, he looks like a good fit in Smith's offense. When the Falcons lose, the coach faces more questions about giving rookie quarterback Desmond Ridder an opportunity to add a spark to the passing game.

Smith on Monday continued to stand behind Mariota. There are reasons for Smith to remain committed to the run-first philosophy. By holding the ball, the Falcons are protecting their defense.

Despite the modest passing numbers, the Falcons are the top-scoring team in the division.

Why pass when the Falcons averaged 5.7 yards per carry against the Chargers? Atlanta rode the league's fifth-ranked running attack to an early 10-0 lead and led 17-14 through three quarters.

Smith has added weekly tweaks to keep the running game from looking too predictable. The Falcons have rushed for 200 yards in three games, their most since finishing 2008 with three.

Mariota accepted responsibility for the inability to make completions downfield.

“I’ve got to do a better job of giving our guys opportunities to make plays,” Mariota said. "I thought our guys were winning on the back end. Just didn’t make some of the throws.”

Even with Patterson starting and scoring two touchdowns in his return after missing four games, Allgeier was the leader of the running game. The rookie set a career high with 99 yards rushing on 10 carries, including a 44-yarder.

With Caleb Huntley a third option at running back, the depth at the position creates a pleasant dilemma.

It may be notable that Patterson, a converted wide receiver, lined up out wide and had a catch for 9 yards on the first play of the game. There was no running back behind Mariota in that formation, but a configuration with Patterson as a wide receiver and Allgeier at running back could be a way for the Falcons to have their best 11 players on the field.

The depth chart at left guard has taken hits in back-to-back weeks. Smith said Monday Matt Hennessy will be held out this week after leaving Sunday's game with a knee injury. Hennessy was a fill-in starter for Elijah Wilkinson, who was placed on injured reserve last week with a knee injury. Another left guard, Jalen Mayfield, already is on IR.

12 — Mariota completed only 12 of 23 passes. The meager completions total has become the norm. He has completed fewer than 15 passes in six of nine games. He passed for 129 yards for his third game under 150 yards this season.

Mariota and the offense will have an opportunity for better production when the Falcons face the Panthers for the second time in less than three weeks Thursday night. Mariota set season highs with 253 yards passing and three touchdowns in a 27-24 overtime win over the Panthers at Atlanta on Oct. 30.