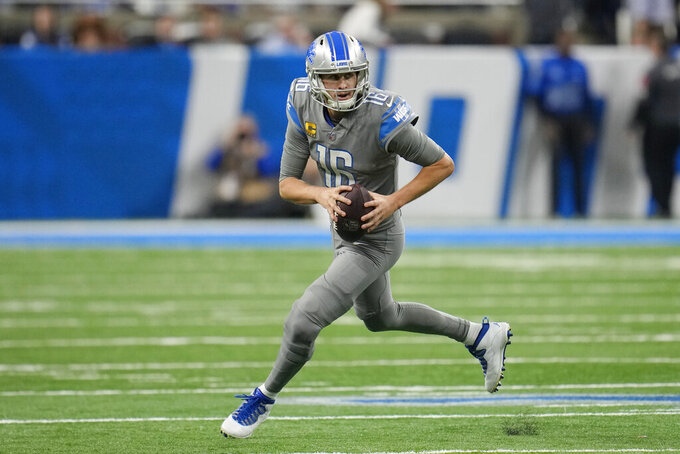 Given that Aaron Rodgers has said he plans to play in Week 13, he is projected as if he will start and play the full game.

Justin Fields is initially projected for half of his usual workload, which impacts the rest of the Chicago Bears. If he does start, he is likely going to be scaled back with his rushing volume and thus is a Tier 2 play.

Only two teams are on a bye, so we have a lot of the usual options in action. That means less chance that your team is relying on a streamer for this week. But if you need one, there are plenty.

Therefore, the pass rate for the Detroit Lions should go up from its usual baseline. Goff has been matchup-dependent this season. Against teams ranked in the top 12 in adjusted pass defense (six games), Goff has averaged just 217.5 yards and -0.03 Passing Net Expected Points (NEP) per drop-back over expectation. Against other opponents (five games), he’s averaging 275.4 yards and 0.26 Passing NEP per drop-back over expectation.

You’ll probably see Derek Carr ranked higher in other places than in the simulations. But it’s important to remember how close he is to other options in the odds (which is why I like them compared to pure rankings). That being said, Carr has been nothing but a fringe QB1 over his past four games (QB9, QB15, QB10, and QB10). The Los Angeles Chargers are a mid-level adjusted pass defense, yet they already faced Carr in Week 1.

In that game, Carr did throw for 295 yards, but finished as the QB17 that week. Carr’s top-12 odds are just not that great, given a lack of a big ceiling.

I check in on Tom Brady often, but it’s because he’s no longer a no-brainer, Tier 1 start. However, it still is tempting to plug him into lineups when we need him — because he’s Tom Brady. This week, Brady faces the New Orleans Saints for the second time this season. In Week 2, Brady had only 190 yards and a touchdown against the Saints. New Orleans ranks 18th in adjusted pass defense. In six games against teams 13th through 23rd — mid-tier matchups — Brady has averaged 16.2 fantasy points on the back of 270.0 yards but just 1.3 touchdowns.

Travis Etienne could play in Week 13 against Detroit.

Joe Mixon is initially projected for a half workload.

Najee Harris’ status is unclear. Jaylen Warren is also still projected for a half workload. If both sit, Benny Snell Jr. is a low-end Tier 2 play (35%).

Be sure not to write off Jeff Wilson’s Week 12 performance. He ran 13 times for just 39 yards and caught one of three targets for another 13 yards.

However, Wilson’s Miami Dolphins ran away with their matchup against the Houston Texans and he was limited in the second half as a result. Wilson played on 76.7% of the team’s first-half snaps and had all seven running back carries and two of four running back targets before halftime. He has a game against his former team, the San Francisco 49ers, who rank first in the NFL in rushing yards over expectation per carry. Raheem Mostert could be back, but in games they’ve shared, Wilson still has a 55.8% snap rate and looks to be the priority.

Is Isiah Pacheco an every-week, no-brainer start? He’s getting close. Pacheco had only a 54.2% snap rate last week, but saw 22 carries and a target on those 39 snaps for a 59.0% opportunity-per-snap rate.

Overall on the season, among backs with at least 15 snaps per game and at least two games played, Pacheco ranks 11th in opportunity-per-snap rate (52.6%). Added into the Kansas City Chiefs’ offense, that holds a lot of added value.

Can we trust Zonovan Knight, a key waiver wire pickup this week, in starting lineups right away?

Knight, last week, had a 49.2% snap rate in a game during which Michael Carter left early. Knight handled 10 of 15 running back carries and two of three running back targets after Carter left the game.

But Knight was already involved before then (he had four carries and a target before that). Knight totaled 103 scrimmage yards on those chances.

The New York Jets are up against a pretty solid Minnesota Vikings defense that ranks 15th, on average, across three key rushing metrics.

Still, Knight is expected to be very involved in the offense, and if you were able to add him this week, you can start him over a lot of other options.

Interested in a running back who played a 70.4% snap rate last week, ranking 15th among the position? Then Kyren Williams should pique your interest.

However, Williams’ 38 snaps within the Los Angeles Rams’ offense led to just 11 carries and three targets for 60 yards from scrimmage. The single red zone rush went to Cam Akers. I think you can do worse than Williams, given the involvement, but just keep expectations in check even against a Seattle Seahawks team that ranks fifth worst in rushing yards over expectation per carry allowed to backs.

Mike Williams is initially projected with a half workload. His status will impact Josh Palmer’s viability greatly.

Let’s check in on Michael Pittman since Matt Ryan returned as the Indianapolis Colts’ starter. In the past three games, Pittman has averaged 9.0 targets (which is a 30.0% target share). The results: just 63.0 yards per game and one total touchdown. He now draws a matchup against a Dallas Cowboys team that ranks in the top 10 in adjusted fantasy points per target allowed to receivers. It’s really tough to balk at a 30.0% target share for any player, so I won’t call Pittman a sit. However, the expectations are lower than the volume suggests.

Brandon Aiyuk has been really up and down in recent weeks. He’s finished as the WR10, WR40, WR9, and WR44 over the past four games. He has not had more than 84 yards in a game all season, making him more touchdown dependent than we’d generally like.

Now, Aiyuk does have a respectable 27.3% red zone target share, but he’s got an 11.5% overall red zone opportunity share once we account for the rushes that the 49ers have in the red zone.

Zay Jones should be a viable WR3 or FLEX-level play in a matchup against the Lions, who rank just 17th in adjusted fantasy points per target allowed to receivers. They’re 29th in catch rate over expectation allowed and 31st in yards per route run to the position.

Last week, we saw Jones generate a 37.8% target share (14 targets) for 145 yards with five of those targets traveling at least 10 yards downfield. Jones also had a 25.6% target share in Week 10 before a bye, and he’s really separated from teammate Marvin Jones in the market share department in recent weeks.

Isaiah Likely is projected to return.

The top-12 odds at tight end feature a very slow, methodical drop-off. That’s a big advantage in the odds versus pure ranks.

The usage for David Njoku got much better in his second week back from injury. In Week 11, he had a 7.7% target share; in Week 12, that was up to 19.4%. Njoku faces the Houston Texans, who have faced the highest target-per-route rate by tight ends of any team in the NFL.

Evan Engram gets the Lions, who are 32nd in adjusted fantasy points per target allowed to the position. Engram’s involvement in the Jaguars’ offense, though, is pretty bleak. He has had single-game target shares of 6.9%, 10.3%, and 2.7% over the past three. Because tight end is so poor overall, he still rates out as a viable Tier 2 option despite that.

Tyler Conklin gets a revenge game — there are numerous this week — against the Vikings. Minnesota is just 24th in adjusted fantasy points per target allowed to the position. Conklin has averaged a respectable 5.1 targets per game this season, good for a 16.1% target share.

Taysom Hill played a season-high 47.2% snap rate last week. The fantasy points weren’t there, but Hill has now played 17 and eight quarterback snaps over the past two games, respectively. Although he has a wide range of outcomes, that’s welcomed at such a weak position.