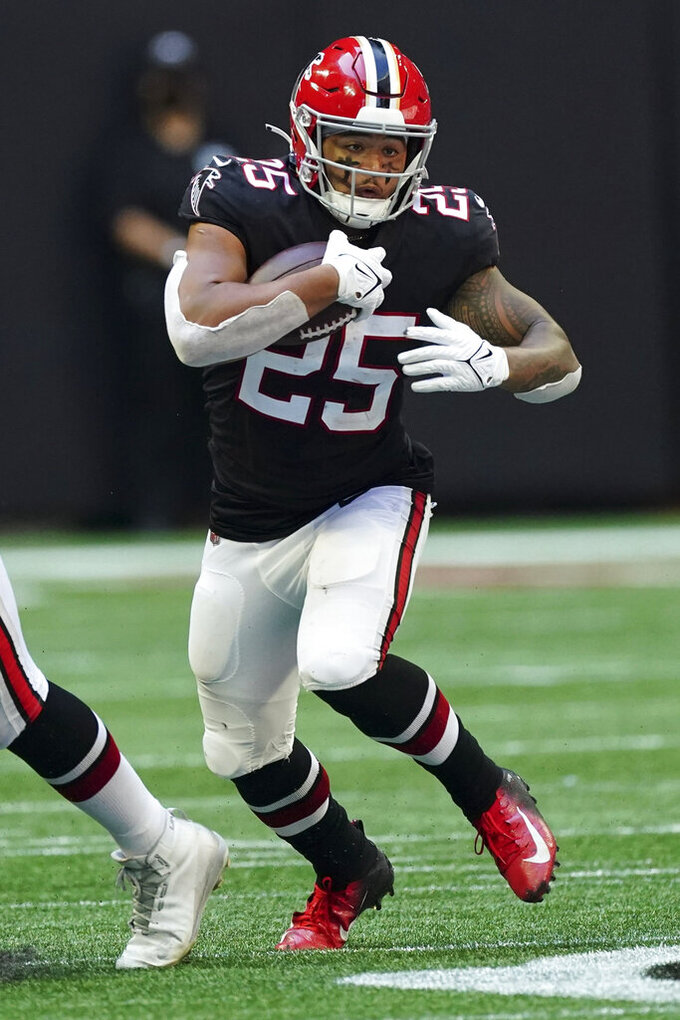 Atlanta Falcons running back Tyler Allgeier (25) runs against the San Francisco 49ers during the second half of an NFL football game, Sunday, Oct. 16, 2022, in Atlanta. (AP Photo/John Bazemore)

Ryan Tannehill is projected at half of his normal workload. Even if he is a full-go, he’s a Tier 3 play.

Only two quarterbacks are on a bye this week, but they’re a relevant duo: Patrick Mahomes and Justin Herbert. With just two teams on a bye, though, most teams won’t be seeking streamers, so the Mahomes and Herbert managers may not need to dig deep for replacements. That said, the Tier 2 list is long, meaning there are a lot of uncertain options.

Slotting in as a high-end Tier 2 play is Dak Prescott. Prescott, in his return, threw for only 207 yards on 25 attempts. Despite the 24-6 final score, the game was close until late. Either way, the Dallas Cowboys did not ask him to throw much against the Detroit Lions. Prescott averaged 0.23 Passing Net Expected Points (NEP) per drop-back, more than three times the NFL average of 0.07. He may be set up for a similar game plan this week as big favorites against the Chicago Bears, though the Bears do rank 10th in adjusted pass defense, according to numberFire’s metrics.

How much longer can we keep starting Tom Brady and getting away with it? Brady is the QB12 overall on the season, but is averaging only 15.1 fantasy points, which would rank him as the QB22 on a per-game basis. Brady has just two games with more than 300 yards passing and just one game with multiple touchdowns. Helping matters, the Baltimore Ravens rank 15th in adjusted pass defense. Brady has played five teams in the middle tier of the pass defense ranks (12th through 25th). In those games, he’s averaged 273.0 yards and 1.2 touchdowns for 15.7 points per game. You’re not benching him for just anyone, but a few waiver-wire players have similar top-12 odds.

It’s true that Aaron Rodgers, as a big underdog, could have to throw a lot against the Buffalo Bills, but that doesn’t necessarily lead to fantasy points. We need efficiency — and touchdowns — from our quarterbacks, especially if they don’t run. Buffalo has the third-ranked adjusted pass defense in the NFL. In three games against other top-eight adjusted pass defenses, Rodgers has averaged 250.7 yards and 1.7 touchdowns, but has done so with poor efficiency (-0.05 Passing NEP per drop-back versus expectation). Like with Brady, be open to alternatives.

James Conner is projected at a half workload, leaving Eno Benjamin in the second tier. With both healthy, consider them both low-end Tier 2 plays.

Chuba Hubbard has a half projection. That puts D’Onta Foreman squarely in Tier 2. If Hubbard plays, both are Tier 3 plays.

Tyler Allgeier has earned a very respectable role in a run-heavy offense. Allgeier has played on 59.0%, 57.1%, and 60.0% of the Atlanta Falcons’ snaps over the past three games while Cordarrelle Patterson is out injured. Allgeier and the Falcons face the Carolina Panthers this week; Carolina ranks 13th in rushing success rate allowed to opposing backs and are allowing 0.17 rushing yards over expected to the position, as well.

Without Breece Hall for the remainder of the season, Michael Carter seemed primed for a featured role with the New York Jets. The Jets traded for James Robinson. Even with Robinson presumed to be limited in his first week with the team, Carter isn’t a must start. Last week (when Hall played 20.8% of the team’s snaps), Carter played on 75.5% of the Jets’ offensive plays and turned 13 carries into 29 rushing yards (24.6 yards under expectation, according to NextGenStats). For the season, Carter has averaged -0.64 rushing yards over expectation per carry; Hall was able to thrive in the offense by churning out 1.41 yards over expected per carry. Carter is a Tier 2 play and should be start-able for most rosters — just not all of them.

Tony Pollard put forth a strong showing last week — while out-snapping Ezekiel Elliott. However, Elliott did miss some snaps. That being said, this typical 60/40 split might draw closer to 50/50 as a result, and the Cowboys could be playing in a positive game script against the Bears based on the point spread. Pollard and Elliott, then, would be getting reps against a team that ranks 27th in adjusted fantasy points per carry allowed to opposing backs. They’re also 23rd in rushing yards over expectation allowed on a per-carry basis to running backs. Both Elliott and Pollard are viable again this week for teams that need some running back depth. If Elliott were to sit this week, then Pollard is rating out as a 70% play to be a top-24 back.

These players have a half projection because of uncertainty: Michael Thomas, Corey Davis, Allen Lazard, Nico Collins and Russell Gage.

There is a lot of depth at receiver available to us, given the two teams on bye.

It’s been an up-and-down fantasy season for Amari Cooper. He has four games with at least 74 yards and two games with fewer than 20 yards. This week, he has a tough matchup with the Cincinnati Bengals, who rank fourth in adjusted fantasy points per target allowed to receivers and seventh in yards per route run to the position. David Njoku is out and Cooper should see a few extra targets as a result.

The Steelers passing game featuring Diontae Johnson, George Pickens and Chase Claypool has struggled. In two full games with Kenny Pickett under center (Weeks 5 and 7), Johnson has a dominant 24.7% target share, followed by Claypool (18.3%) and Pickens (15.1%). Unfortunately for him, his catch rate over expectation is -17.6%. Claypool’s is -11.6%. Pickens is the one making the most of his chances (+18.0%). Ultimately, no receiver has underperformed his expected fantasy point output (13.5 half-PPR points per game in my model) more than Johnson (-5.7 points per game). In a game where the Steelers could have to throw as big underdogs, we can trot out Johnson again. The same goes for Pickens and — to a lesser extent — Claypool.

The inclination to sit Gabe Davis after a bye week is probably pretty weak. There are some reasons for concern, though. Although the Bills’ pass rate over expectation is the best, Davis has not had more than six targets in a game yet this season and has three scores in his past two games to boost his production.

If you’re set at receiver or flex and don’t truly need Davis, then take a long look at your alternatives before chasing the production tied to questionable volume.

Michael Gallup was blanked in Dak Prescott’s return in Week 7. Gallup saw only a pair of targets on his 21 routes. Of note, however, both of those were downfield targets, and his average target depth was 22.7 yards. We still want more than two targets, of course, but there’s still upside in Gallup’s role, and his target share moving forward should look more like the 19.0% it was entering Week 7 and not the 8.0% rate he earned last week. He’s not a priority start, but things should be better soon.

Darren Waller and Cameron Brate have a half projection.

Keeping with the Cowboys theme, Dalton Schultz had a noteworthy connection with Prescott in the quarterback’s Week 7 return (five targets for 49 yards). The Bears are a top-five adjusted defense against tight ends, yet even with opponent adjustments, they haven’t faced much in the way of production or volume. Schultz, if healthy, can be rolled out again this week.

The model likes Greg Dulcich, the third-rounder from UCLA. Dulcich has averaged 6.0 targets (a 17.1% target share) and 47.5 yards in his two games since debuting — even while splitting those games between Russell Wilson and Brett Rypien. Notably, Dulcich has averaged 2.5 downfield targets per game (10-plus yards downfield). Only Mark Andrews (3.9) and Travis Kelce (2.9) have averaged more downfield targets on a per-game basis.

Another tight end much higher in the simulations than versus consensus is Noah Fant. Fant is yet to finish a week better than the TE15, but he’s stepping into a pretty fantasy-friendly game against the New York Giants. The Giants have allowed a target on 23.0% of tight end routes so far this season, the second-highest rate in football. On those routes, they’ve given up 1.83 yards on average, the fourth-highest yards-per-route-run rate allowed to the position.