Garoppolo listed as doubtful for 49ers with injured thumb 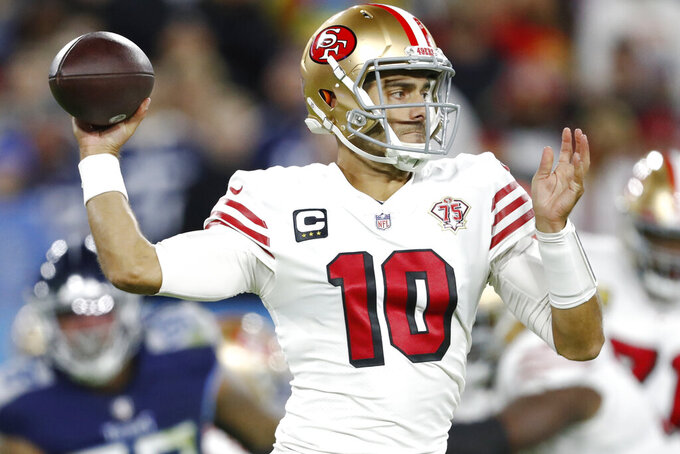 SANTA CLARA, Calif. (AP) — San Francisco 49ers quarterback Jimmy Garoppolo is listed as doubtful this week because of a injured right thumb with rookie Trey Lance in line to get his second start.

Garoppolo hurt his thumb last Thursday night in a 20-17 loss at Tennessee and didn't practice this week as he tries to rest the thumb.

Coach Kyle Shanahan said Garoppolo will test out the thumb this weekend to see if he's able to play on Sunday when the Niners (8-7) host the Houston Texans (4-11).

“That’s why we didn’t have him go out there because we’re told each day that we can push it off one more it gives him a better chance for it to stay,” Shanahan said Friday of the torn ligament in Garoppolo's thumb. “So we’re trying to hold off him throwing until tomorrow, possibly Sunday.”

If Garoppolo can't go, Lance will get his second start of the season with San Francisco looking to clinch a playoff berth with a win and a loss by New Orleans.

The Niners traded three first-round picks to draft Lance third overall in April, but Lance has only played five snaps in garbage time since starting in Week 5 at Arizona. But he got the full week of practice this week with the first-team offense.

Lance went 15 for 29 for 192 yards with an interception in that 17-10 loss and also ran 16 times for 89 yards in his first start. Lance hurt his knee in that game and hasn’t thrown a pass since but has impressed the team in practice.

“Guys believe in Trey,” Shanahan said. “I think guys expect him to go out there and play well. By no means, like everyone, is he going to play perfect. They got to see him Arizona week, they’ve got to see him this week in terms of how he handles himself. ... He knows how to handle the part. He knows how to get in the huddle. He takes command. His preparation is very impressive, and I think that gives the guys a lot of confidence in him.”