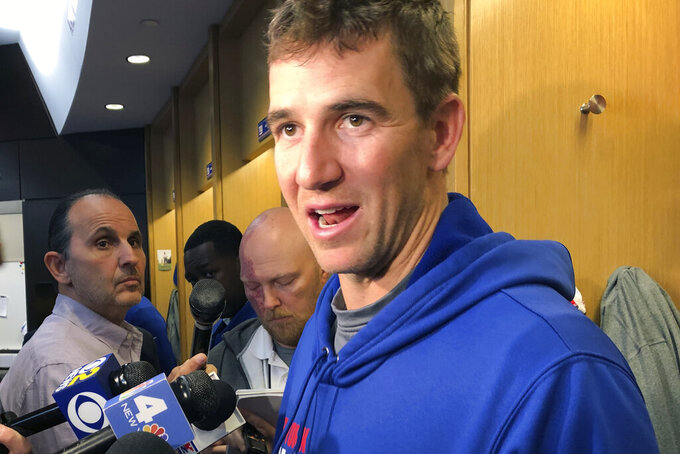 Jones, who replaced Manning as the starter in the third week of the season, missed Monday night's loss in Philadelphia with a sprained right ankle.

The sixth pick overall in this year's draft, Jones took part in a jog-through workout on Wednesday. He was limited in Thursday's more full-paced practice for the Giants (2-11).

Coach Pat Shurmur said Jones is making progress but he could not say whether he would be ready for Sunday's game at MetLife Stadium against the Miami Dolphins (3-10).

“Just like any injury, it's a process to come back," said Shurmur, who said he could wait until game day to choose his starter.

“Eli is an outstanding player, so to go back to him is a good thing," Shurmur said. “You never want to have an injury to anybody, but in our system, Eli going out there, he can execute at a very high level and he's done it for many years."

The Giants could be without a couple of key players against the Dolphins.

Right guard Kevin Zeitler, who has not been out for a game since the 2014 season, missed practice for the second straight day with wrist and ankle injuries sustained Monday.

Second-year pro Nick Gates will replace him, if necessary. He has never started a regular-season game at guard,