Giants take 2 body blows from Cowboys, a loss and injury 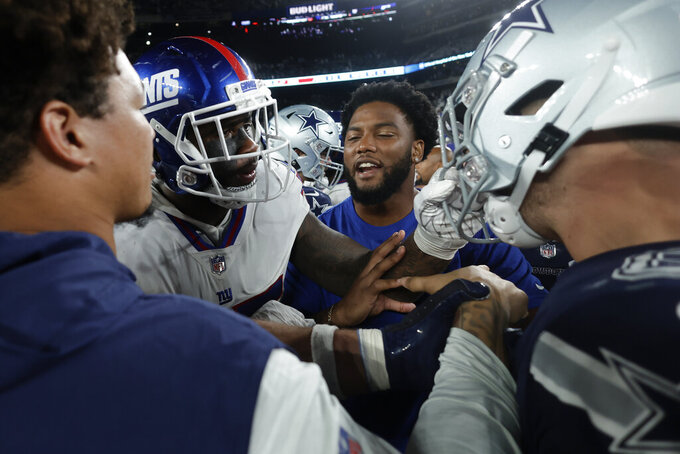 EAST RUTHERFORD, N.J. (AP) — The New York Giants took it on the chin against the Dallas Cowboys.

Dropping a hard-fought 23-16 decision to the rival Cowboys on Monday night to lose for the first time under new coach Brian Daboll hurt. What was worse came at the end of the game.

Wide receiver Sterling Shepard, the Giants' longest-tenured player and one of the key leaders on a young team, sustained a leg injury on New York's final offensive play and it did not look good.

Shepard, who took a pay cut to come back this year, had to be carted off the field and Daboll said there's a possibility the injury is very serious.

Shepard made it back for the season opener and caught a touchdown pass after recovering from an Achilles tendon injury late last season.

“It was heartbreaking,” offensive tackle Andrew Thomas said. “Shep worked really hard to get back and to see him go through something like that again, I feel for the guy. He loves the game, he works hard.”

Daboll had no immediate information on the extent of the injury but he was clearly worried about the 29-year-old who led the Giants (2-1) with five catches for 49 yards.

New York quarterback Daniel Jones, who was sacked five times by the Cowboys and was on the run most of the game eluding pass rushers, said seeing Shepard go down on a play where they was seemingly no contact was rough.

“Real tough to see that, for sure,” said Jones, who ran for 79 yards and threw for 196. “A guy who works so hard, he’s battling back from an injury last year. I feel for him as a teammate, as a close friend and yeah, that’s tough to see.”

Shepard was not made available to reporters after the game.

Saquon Barkley, whose 36-yard touchdown run gave the Giants a 13-6 lead in the third quarter, said he will go home, say a prayer for Shepard and hope for the best.

“Just the type of guy Shep is, he is a character, especially the energy he brings to the team,” Barkley said. “He's one of my best friends, if not my best friend. So to see him go down, you know, we all got his back.”

Daboll called the injury a shame.

“Guys work their butts off to get back from injuries, and if this is something that he’s out for the whole season – which we’ll probably know tomorrow morning or maybe even tonight – you hurt for those guys because they put everything into it,” he said.

As for the loss, Daboll said his approach will be the same. It's one game and the team needs to correct its mistakes and get ready to play the Bears on Sunday.

“You can’t let these things linger just like you can’t let a win linger,” he said. “You have to move on and get ready on the next opponent. To ride the rollercoaster, there’s going to be a lot of ups and downs throughout the league, throughout the year for any team.”