High-scoring ways has Titans closing in on AFC South title 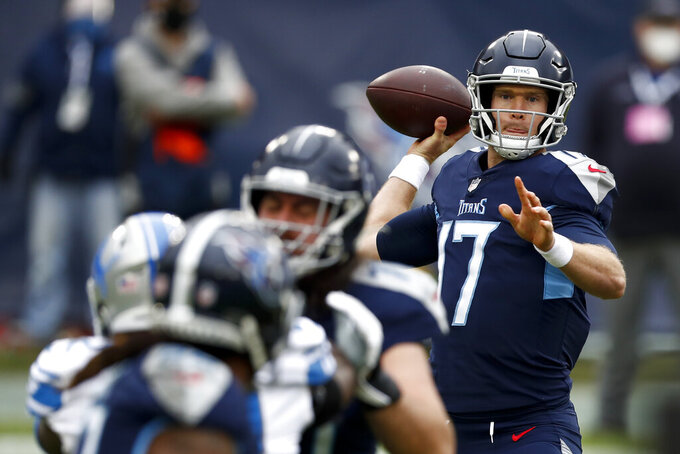 NASHVILLE, Tenn. (AP) — Ryan Tannehill admits he was frustrated not hearing his name called for the AFC's Pro Bowl team in arguably the best season of his career.

He had plenty of company in Tennessee.

Only NFL rushing leader Derrick Henry and wide receiver A.J. Brown received Pro Bowl nods despite the Titans being the NFL's top-scoring team. Tennessee leads the league with 436 points and is tied with Kansas City averaging 31.1 points a game — best in the NFL.

Sure seems like there's more going on in Tennessee than just the Henry show.

“That perception is definitely out there, and I don’t think there’s any doubt about that," Tannehill said Wednesday of the idea he only hands off to Henry. “But, you know, I can’t control that. I just got to go out there and and do the best I can do each and every week. And the rest takes care of itself.”

The Titans (10-4) are a win and an Indianapolis loss away from clinching their first AFC South title since 2008 thanks to their high-scoring style. They've scored 55 touchdowns, tied with the Green Bay Packers (11-3), who they visit Sunday night.

Packers coach Matt LaFleur, the offensive coordinator for Titans coach Mike Vrabel in 2018, is surprised his replacement Arthur Smith's name isn't being publicized more for head coaching jobs. LaFleur said Henry is playing with a lot of confidence and everyone on offense has bought in.

LaFleur also knows the Packers will have much more to worry about than simply defending Henry. The Packers coach ticks off Tannehill, tight ends Jonnu Smith and Anthony Firkser and wide receivers Corey Davis and A.J. Brown.

“There’s weapons all over the field,” LaFleur said of the Titans. “Again, it’s one of the best offenses in the league right now, and we have a great challenge in front of us.”

Thanks to Henry and his career-high 1,679 yards rushing, the Titans are very effective using play-action to set up the pass. Tannehill has taken advantage, throwing a career-high 31 touchdown passes, and has been very precise with a career-low five interceptions.

The Titans were the first NFL team this season to reach both 3,000 yards passing and 2,000 yards rushing as a team, getting there in 13 games.

They're also averaging 399.4 yards per game, second only to the Chiefs (427.9), and became the fifth team in NFL history to average at least 420 yards and 30 points in five straight games in last week's 46-25 win over Detroit.

This franchise hasn't finished a season ranked in the top three on offense since 1993. That year the then-Oilers were third averaging 353.6 yards with Hall of Fame quarterback Warren Moon.

Tannehill said the Titans are constantly tweaking things, especially their best plays, because not every one is executed just the way they want. Someone might be a hair off on a block, throw or pass route.

“We’re able to take a look at that,” Tannehill said. “How can we be better as we practice this week and get ready for Sunday? Or maybe adding in a new route concept or adjusting a route. All of that plays together in finding ways to improve.”

Tannehill has plenty of options when throwing, and it's why 14 Titans have scored at least one touchdown. Defenses have to decide who to focus on, and that's why they could have a pair of 1,000-yard receivers in Corey Davis (945) and Brown (881).

Brown, whose 18 TD catches are the most in a player's first 28 games with this franchise, said the Titans bring a lot to the table.