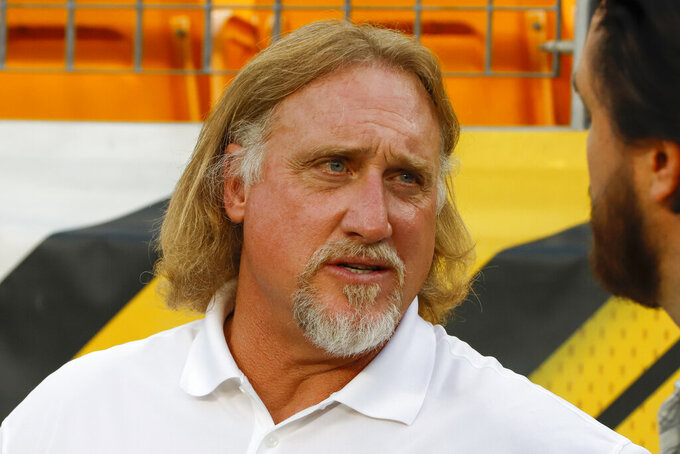 FILE - In this Sept. 30, 2019, file photo, Pro Football Hall of Fame outside linebacker Kevin Greene stands on the sideline during warmups before an NFL football game between the Pittsburgh Steelers and the Cincinnati Bengals in Pittsburgh. Hall of Fame linebacker Greene, considered one of the fiercest pass rushers in NFL history, has died. He was 58. Greene died Monday, Dec. 21, 2020, the family confirmed, as did the Pro Football Hall of Fame. (AP Photo/Gene J. Puskar, File)

Kevin Greene will be remembered for his long blond hair, his charisma, and the havoc he created for opposing quarterbacks.

The Hall of Fame linebacker, considered one of the fiercest pass rushers in NFL history, died Monday, it was confirmed by the family and the Pro Football Hall of Fame. He was 58.

No cause of death was given.

“I regarded him as a personal friend and a true Hall of Famer in every sense," Hall of Fame president and CEO David Baker said in a statement Monday. “He possessed the most incredible can-do attitude of anyone I ever met. He was a great player, but more than that, he was a great man."

A two-time All-Pro and five-time Pro Bowl selection, Greene finished his 15-year NFL career with 160 sacks, which ranks third in league history behind only Bruce Smith (200) and Reggie White (198). He also had 23 forced fumbles and five interceptions.

Former Panthers general manager Bill Polian said Greene was a person exceptionally devoted to his family, his craft as a football player and the military, where he earned the rank of captain and completed airborne training at Fort Benning to become a paratrooper.

Polian said Greene had an exceptional ability to escape blockers.

“He was a self-made technician and as good as anyone who has ever played the game in terms of technique," said Polian, like Greene a Hall of Fame inductee. "And because he was undersized, grit played a tremendous role in his success.”

Greene would have agreed with that assessment.

“I wasn’t the biggest (and) I wasn’t fastest,” Greene once said. “But as long as you have a motor, you have heart ... that will overcome any physical limitations.”

Dom Capers, who coached Greene in Pittsburgh and Carolina, said Greene “had such a great passion for the game.”

“He had an infectious personality,” Capers said. “He influenced everybody that he was around. Everyone had a tremendous amount of respect for him because he not only produced as a player, but because as good of a player as he was he was an even better person.”

Steelers President Art Rooney II noted the effect Greene had on the team.

“We lost an amazing player and person this morning with the passing of Kevin Greene,” Rooney said. “His sudden death is a shock to us all as he was a close friend and teammate to so many people in the Steelers family.

“When Kevin came to the Steelers in 1993 he had an immediate impact. Paired with Greg Lloyd, Kevin and Greg led a defense that became known as Blitzburgh and went on to play in Super Bowl 30. Kevin’s energy and enthusiasm were inspiring for our team as well as our fans.”

Greene was inducted into the Hall of Fame in 2016.

“So sad to hear the news of Kevin Greene passing away,” Steelers defensive lineman Cam Heyward said. “I only had a couple of interactions with him but when we did talk he always spoke with great energy and passion.”

“It’s a Honor to Represent this legendary Number today for you and your family. I will make y’all proud. Prayers to Kevin Greene a legend.”

Greene had 14 or more sacks in three different seasons, including twice with the Panthers late in his career.

He also coached for the Packers and Jets after his retirement.

“To the coach that believed in me and gave me an opportunity as a Undrafted kid as he called ‘Out of nowhere coconut head’ to make my dreams comes true was a blessing! I will always remember your saying ‘there’s no substitute on kicking a man a(asterisk)(asterisk).’ RIP KG,” tweeted Jets linebacker Frankie Luvu.

Baker said the Hall of Fame flag "will be flown at half-staff in Kevin’s memory.”