Hopes for NFC East champ Cowboys start with defense for once 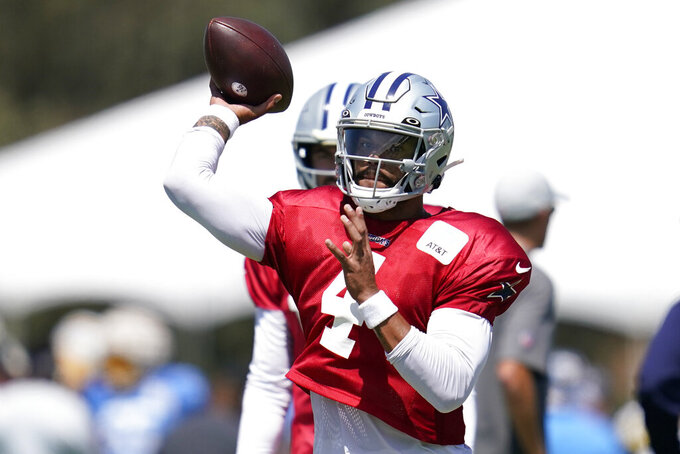 Strengths: Defense isn't normally where this conversation starts with the traditionally offensive-minded Cowboys. Reigning NFL Defensive Rookie of the Year Micah Parsons leads an opportunistic unit that led the NFL with 34 takeaways last season. Parsons had 13 sacks as a linebacker, and CB Trevon Diggs intercepted 11 passes to match Everson Walls' 40-year-old franchise record. DeMarcus Lawrence headlines what could be a deep and talented defensive line. QB Dak Prescott is healthy and says he's as fit as ever. The starter since Week 1 of his rookie year, Prescott is going into his seventh season.

Weaknesses: The group behind new No. 1 receiver CeeDee Lamb will be unproven early in the season with Michael Gallup still recovering from the ACL he tore in January and free agent pickup James Washington probably out until October after breaking a foot early in training camp. The inconsistency of RB Ezekiel Elliott and the run game is a reflection of an offensive line in transition. The only anchor left for now is five-time All-Pro RG Zack Martin after eight-time Pro Bowl LT Tyron Smith tore a hamstring in practice and is expected to be sidelined into December. RT Terence Steele, an undrafted third-year pro, has the most experience among the other four prospective starters currently on the roster. Kicker is unsettled after the Cowboys decided to move on from Greg Zuerlein, who had a spotty 2021 season.

Camp Development: Barr was signed during camp in a move that could give the Cowboys more flexibility in using Parsons as a pass rusher. Barr fits the more traditional mold of a linebacker along with 2018 first-round pick Leighton Vander Esch. Prescott had a healthy camp after missing almost all of the preseason last year with a strained shoulder. WR KaVontae Turpin returned a kickoff and punt for touchdowns in a preseason win over the Los Angeles Chargers. It all but assured a roster spot for the 5-foot-7 speedster who is getting his first NFL chance nearly four years after his TCU career ended when he was arrested on a charge of assaulting his girlfriend.

Fantasy Player To Watch: Lamb could be the statistically dominant lead receiver that Prescott hasn't had in six seasons as the starter. Since 2010, Dez Bryant is the only Dallas receiver with at least 1,300 yards receiving in a season (he did it twice). The absence of Gallup and Washington early should make Lamb a frequent target.

Expectations: The Cowboys still believe they can make their first deep playoff run since the 1995 season after another early exit last season with a wild-card loss to San Francisco at home. Coach Mike McCarthy's future could be in doubt without a trip past the divisional round, which hasn't happened since the last of the franchise's five Super Bowl titles 27 years ago. Sean Payton is a favorite of owner Jerry Jones, and figures to be back in coaching next year after leaving New Orleans. The NFC East hasn't had a repeat winner since the last of Philadelphia's four consecutive division titles in 2004. The Cowboys want to do a lot more than stop that trend.