Injuries won't subside as Ravens try to stay atop division 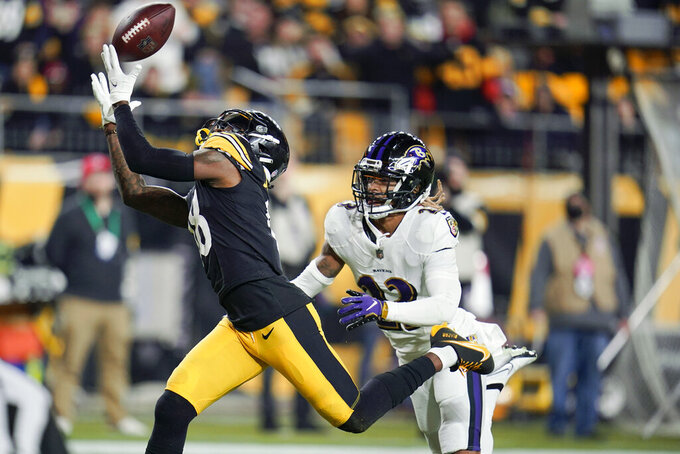 OWINGS MILLS, Md. (AP) — The way Anthony Averett's role has evolved this year is a microcosm of what the Baltimore Ravens have gone through as a team.

In his first three seasons with Baltimore, Averett made seven starts total. In 2021, he's made 11, pressed into more significant responsibility in a secondary that — like the rest of the Ravens — has been beset by injuries.

“It’s like nobody (is) left from the beginning,” Averett said. "We’ve just got to continue to move forward.”

The latest major injury for the Ravens was the loss of cornerback Marlon Humphrey, who went on injured reserve Wednesday. That takes a two-time Pro Bowler off the field for Baltimore, which lost another key cornerback — three-time Pro Bowler Marcus Peters — to a season-ending injury just days before the team's opener in September.

Preseason injuries to Peters and running backs J.K. Dobbins and Gus Edwards had the Ravens facing challenges from the start. They've handled that well enough that they lead the AFC North with five games remaining, but there's still a sense that any one of these injuries could be a breaking point.

The Ravens will do their best to make sure that doesn't happen.

Baltimore (8-4) takes a one-game lead in the division into this weekend's game at Cleveland, but the Ravens lead the last-place Browns by only two games. Since starting the season 5-1, Baltimore is 3-3 — and there have been few signs of a letup when it comes to the injuries.

The Ravens have 17 players on IR. That doesn't count tackle Ja'Wuan James, who on Wednesday was designated for return, or kicker Jake Verity, who is on practice squad/IR.

The Ravens have had little choice but to ask players like Averett to step up. He's played 670 snaps this season, according to Pro Football Focus. That's more than he had in his first three seasons combined.

Averett gives Harbaugh credit for helping the team overcome a lot of its obstacles this season.

“He's the main man. He's what keeps our mind right. We pretty much just let him take the lead," Averett said. "It's not really all about us sometimes, too. It's the coaching, too, that prepares us for these type of things. So everybody's just got to be ready for the opportunity for the new faces that come on the field.”

One area that's become more healthy as the season has progressed is the receiving corps. Marquise Brown, Sammy Watkins and Rashod Bateman have all missed time, but they're able to play now. That hasn't been much help to an offense that's scored under 20 points in five of the last six games.

What has helped the Ravens is that every team in the AFC has four losses or more, so Baltimore is still atop the division despite all its problems.

But that position looks awfully precarious at the moment.

“Nobody thought we were going to be in this position — No. 1 in the AFC North — anyway,” Averett said. “So, we've just got to continue to move forward.”