Jaguars move quickly to end many of Meyer's practice methods 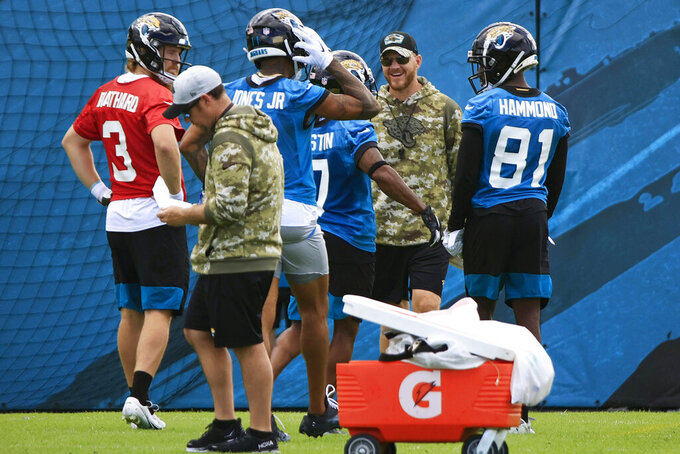 JACKSONVILLE, Fla. (AP) — The Jacksonville Jaguars moved quickly to rid themselves of some of Urban Meyer’s non-traditional methods Thursday.

The Jaguars embraced the not-so-subtle changes that followed owner Shad Khan firing Meyer after a 2-11 start that included countless embarrassments on and off the field.

“It brings a little bit of clarity to the guys in the locker room,” rookie quarterback Trevor Lawrence said. “I wouldn’t say relief, but I would say just bring some clarity and some direction moving forward.

“We really want to go and finish the season strong, and to be honest, it’s been hard to last the last week with everything going on. There’s a lot of things being stirred up by the outside, too, that didn’t help. Made things a lot worse. It’s hard to be focused and have all your attention and efforts going towards winning the game when there’s so many things going on.”

Meyer's final week included: an accusation Wednesday that he kicked former player Josh Lambo on the practice field in August; confirmation that he got into a heated argument with receiver Marvin Jones after criticizing wideouts for not winning enough one-on-one matchups a few weeks ago; and a report that Meyer called assistant coaches losers while questioning their resumes.

With his fate seemingly sealed, Meyer bolted the facility hours early Wednesday and left assistants to handle the game plan. He didn't check out and never checked back in with any of them.

The Jaguars and Meyer's representatives then spent hours working out details of the coach's termination agreement, eventually leading to the late-night news drop.

Lawrence and many of his teammates woke up to learn Meyer had been fired.

“There's been some drama. There’s been some distractions,” Lawrence said. “You can’t ever go back, though. You just have to move forward.”

Offensive coordinator Darrell Bevell was made interim coach and handled a team meeting Thursday. He also instituted several tweaks aimed at maintaining a normal routine for players while putting his own spin on leading them through the final four games, beginning Sunday against Houston (2-11).

“All I can do is be me,” Bevell said. "Fortunately, I’ve been around a lot of great coaches. The thing I learned from them is to take the things from them and put them into my personality, my way, and then say, ‘OK, I just can’t pull that off.’

“So I’m only going to be me, and I’m going to try to be that same person each and every day.”

Although players and coaches refused to acknowledge Meyer's firing was a much-needed relief near the end of dysfunctional season, they clearly saw it as a weight lifted as they try to end a five-game skid and find some momentum heading into an uncertain offseason.

“The biggest thing that we need right now is someone that’s consistent,” Lawrence said.

Meyer's ability to lead had clearly been compromised, likely caused by the pressure and angst that came with losing more games in any one season than he lost in seven years at Ohio State or in his first five years at Florida.

Khan had already started to consider what to do with Meyer at the end of the season when Lambo's accusation dropped. Meyer denied doing anything more than taking a playful poke at Lambo, who could end up suing Meyer and the Jaguars for workplace harassment.

It was the latest and last misstep for Meyer in 11 months on the job. A three-time national championship-winning coach in college, Meyer failed miserably to make a smooth transition to the NFL.

He didn't know rules and procedures. He struggled to recall what happened in games and on the sidelines. He raised eyebrows when he mistakenly identified Joe Mixon as Houston’s running back and couldn't come up with the names of his own players.

At best, Meyer looked like a stretched-thin coach wading into uncharted waters. At worst, he appeared in over his head.

Meyer really rankled his bosses when he was caught on camera inappropriately touching a woman at an Ohio bar in early October. Khan publicly reprimanded Meyer then and said he needed to regain “our trust and respect.”

Meyer didn't, and his actions following the team's latest loss, a 20-0 drubbing at Tennessee on Sunday, made it clear he needed to go. He barely shook hands with Titans coach Mike Vrabel after the game and then threatened to fire anyone caught leaking information from inside the facility.

“I feel like this locker room needs a head coach that actually believes in what their players are saying, trust in that, that we can all make this work," cornerback Shaquill Griffin said. "This is not a one-man show. I feel like sometimes head coaches can come in and flip around, ‘This is my way. Let’s do it,’ and sometimes they forget about us.