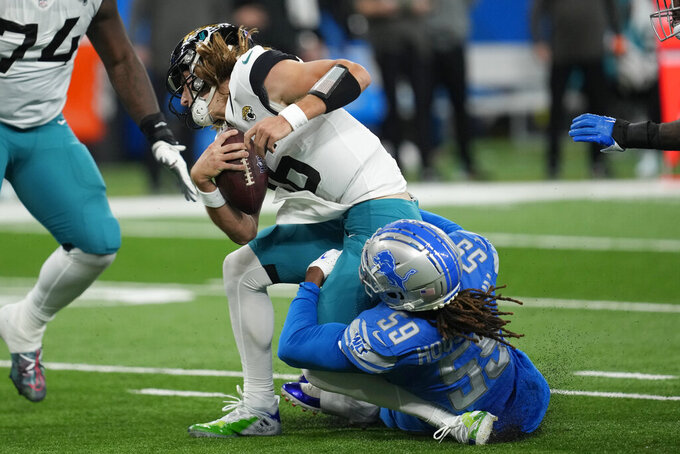 Lawrence missed two days of practice because of a badly sprained big toe on his left foot, watching from the sideline as C.J. Beathard took all the repetitions with the first-team offense. But Lawrence reclaimed his position Friday and is expected to start against the Titans (7-5) on Sunday, a game the Jaguars need to win to keep alive slim playoff hopes in the AFC South.

“I feel good,” Lawrence said following his first on-field work of the week.

Jacksonville (4-8) took a cautious approach with Lawrence, who initially thought he injured his knee when he was sacked on the final play of the first half last week at Detroit. But Lawrence returned to play the second half, and tests later revealed the severity of the toe injury.

Lawrence wasn't sure earlier in the week whether he would wear any extra protection inside his cleat.

“I just think it’s going to be his peace of mind, quite honestly,” Pederson said. “Can he play through it? It's going to be sore just like anybody’s injuries this time of year. He's obviously a tough guy. He wants to play. He wants to be out there. I think these next couple of days will probably ease any kind of tension that he might have going into the game.”

Lawrence has started every game in two seasons since being the No. 1 overall pick in the 2021 draft. He has completed 65.6% of his passes this season for 2,834 yards, with 17 touchdowns and six interceptions. He also has three rushing scores and a league-high six fumbles.

The Jaguars also waived running back Darrell Henderson, whom they claimed off waivers from the Los Angeles Rams last month.