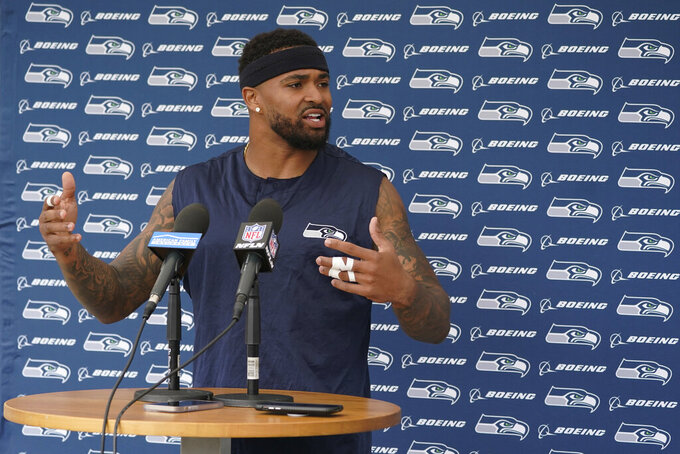 RENTON, Wash. (AP) — Jamal Adams saw the text from his mom, containing his full name, and knew they needed to talk.

The message coming from his family was clear: take the deal being offered by the Seattle Seahawks.

“She said my full name, and when my mother says my full name, I think I need to pay attention,” Adams said. “She gave me a nice little paragraph and basically just told me that you don’t have to prove anything else to anybody. You did it. You did enough. We’re happy. As long as my family’s happy, man, and I’m happy.”

Adams became the highest-paid safety in the NFL on Tuesday after signing the four-year extension, which is expected to be worth up to $70 million and includes $38 million guaranteed.

An eventual long-term deal with the Seahawks seemed a foregone conclusion when Seattle sent two first-round picks to the New York Jets last summer to land the multitalented safety. But negotiations on the contract were prolonged and eventually reached a stalemate.

“He stood his ground, too. That’s why it took five months,” coach Pete Carroll said. “He was very firm about. So it was just a real intense negotiation, obviously more so near the end here. There was a lot of quiet time in between all of that. But I thought both sides really competed really hard in this thing. Really it’s a great conclusion for us, for him, too."

Adams was on the practice field for the first time after signing his deal, getting a handful of snaps in the build up toward the season opener on Sept. 12 at Indianapolis. Adams said he never considered the idea of missing regular-season games, but his “hold in” during training camp went longer than most expected.

Adams, whose rookie deal was set to expire after the upcoming season, had been attending and participating in meetings but had not taken part in any practice.

“He’s studied like crazy, been with us the whole time, all through Zooms, all through all of our work he’s been with us. It’s not like he’s been out in left field somewhere,” Carroll said. “So he knows what’s going on. He’s got to get his feet on the ground and the timing of speaking and communicating and all the things that they have to do. It’ll come.”

Adams had a mixed first season with the Seahawks. He thrived as a pass rusher, setting an NFL record for sacks by a defensive back with 9 1/2. But he struggled at times in coverage and suffered significant hand and shoulder injuries that limited him as the season progressed.

He appeared in 12 regular-season games and finished with 83 tackles and one forced fumble. He was an All-Pro selection in 2019 with the Jets.

Adams said he was “like glass” last year with the injuries.

“I had to learn a lot as far as how to take care of my body even more because I was taking care of my body but I can go to the next level and that’s what I did,” Adams said. “So far it's been going great and that's the plan in staying healthy.”

While Adams’ situation is resolved, the Seahawks still have a lingering contract issue with left tackle Duane Brown, who is also at training camp but not participating in practices. Brown’s current contract — which has a $13.2 million cap hit for 2021 — expires after the season and the Seahawks have seemed less inclined to engage on an extension with the veteran, who is about to turn 36 and enter his 14th NFL season.

Seattle needs Brown in the short-term since there is no clear succession plan at left tackle. Rookie Stone Forsythe started Saturday’s preseason opener at Las Vegas and struggled at times. Jamarco Jones returned to practice Tuesday and may be the most viable short-term option with Brown not participating.

NOTES: QB Geno Smith was not at the facility Tuesday and Carroll didn't have a timeline on his return after he suffered a concussion in the preseason opener. ... WR D'Wayne Eskridge was activated off the physically unable to perform list and Carroll expects him to be ready for the opener. ... TE Colby Parkinson received a positive report on his foot injury and could be back in a few weeks.