James Bradberry gives Giants one CB, searching for another 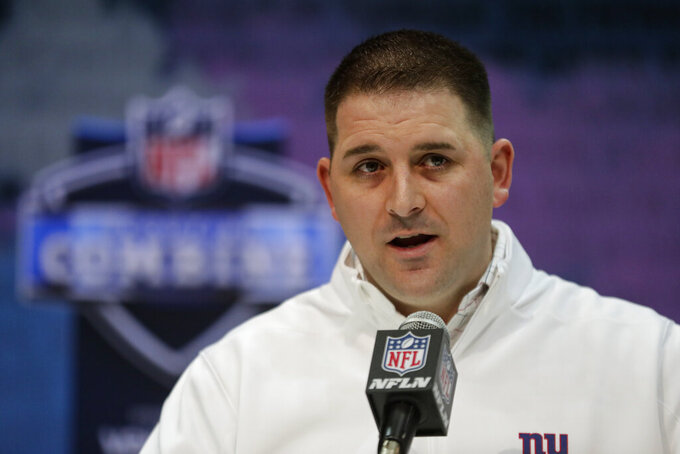 FILE - In this Tuesday, Feb. 25, 2020, file photo, New York Giants head coach Joe Judge speaks during a press conference at the NFL football scouting combine in Indianapolis. As the Giants and new coach Joe Judge get ready for their first training camp practice on Monday, Aug. 17, the one certainty is recent free agent signee James Bradberry will be one of the cornerbacks. The former Carolina Panther is one of the best in the league and gives New York a lock-down guy.(AP Photo/Michael Conroy, File)

A couple of months ago, the New York Giants seemed to be set at one cornerback spot and with plenty of choices at the other.

Things have changed. Part of it is due to the coronavirus pandemic and the other part is problems off the field.

As the Giants and new coach Joe Judge get ready for their first training camp practice on Monday, the one certainty is recent free agent signee James Bradberry will be one of the cornerbacks. The former Carolina Panther is one of the best in the league and gives New York a lock-down guy.

Giants special teams coordinator Thomas McGaughey spent time in Carolina with Bradberry, who was signed to a three-year, $43.5 million contract.

“A good man, works his tail off, very quiet and unassuming,” McGaughey said. ”He has a workmanlike mentality. He comes in, he does his job. He’s like a little church mouse in the room. You won’t even know he’s there."

The other side is wide open.

DeAndre Baker, the last of three first-round picks last season and a starter most of the year, is facing armed robbery charges in Florida. His status for the season is unsure. Sam Beal, who showed some promise last season, opted out because of the virus.

New York thought it had a veteran lined up to take the other cornerback spot but a deal with Ross Cockrell fell through this week. He played with Bradberry in Carolina.

The options left are Darnay Holmes, a fourth-round draft pick out of UCLA, Corey Ballentine, a sixth-round pick from last year who had two starts, Grant Haley, a backup the past two seasons, and second-year player Julian Love, who looked good late in five starts at safety.

The Giants also have a number of free agents in camp.

Judge said it isn't necessary to add another veteran cornerback.

“Our priority is just to develop the players we have on the roster and look for any talent available on the street,” Judge said Wednesday. “I don’t care if it’s a first-year player or a 10th-year player. We’re looking for good players who can help build this program.”

Bradberry, who is learning Pat Graham's defense like everyone else, doesn't seem to be worried.

“All we can do is worry about the guys we have in the room,” said Bradberry, who defended 47 passes with eight interceptions in his first four NFL seasons. "It's next-man up mentality around here. Look at the room, we have a lot of ability. We are going to get the job done no matter what they asked us to do.”

Judge said the Giants planned to cross-train their defensive backs so cornerbacks and safeties may be used to give opponents different looks.

Safety Jabrill Peppers, who was sidelined late last season with a back injury, will be used in the box at times. Second-round draft pick Xavier McKinney and Love will vie for the other starting job at safety.

“We’re all hungry," Peppers said, who endured a 4-12 season in his first year with the Giants. “We play for one of the most prestigious organizations in the National Football League. We all know where it should be. We’re all hungry to be the best person on and off the field that we can be. It’s exciting, it’s exhilarating.”

NOTES: During most of the virtual calls with the media, coaches and players have sat at a table for interviews without masks. Second-year wide receiver Darius Slayton sat down with his mask on. When asked why, he just said wearing a mask was a habit now. Players have to wear a mask in camp. ... The Giants started Phase 2 of training camp Wednesday. All 80 men on the roster on the field at the same time. ... Judge said the Giants planned to scrimmage a week from Friday.