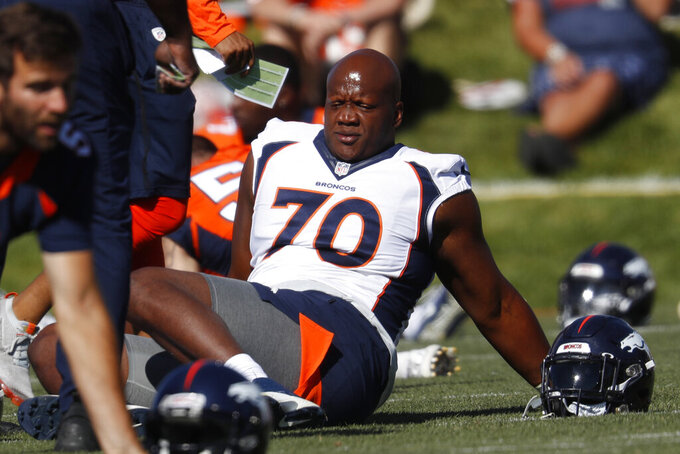 ENGLEWOOD, Colo. (AP) — Ja'Wuan James filed a $15 million grievance Monday against the Denver Broncos, who released him last month after he ruptured an Achilles tendon during an off-site workout.

Also Monday, the offensive tackle agreed to a two-year deal with Baltimore that ESPN reported was worth up to $9 million and includes $500,000 this year while James rehabs with the Ravens.

James' injury became a flashpoint between the NFL and the NFL Players Association over the “non-football injury” designation, which relieves teams from having to pay players their full salaries if they're injured off site.

In his grievance, James argues that his injury “was sustained in the course and scope of football training.”

He further argues that the NFI designation was meant for players who got hurt during reckless off-field activities, not while training for the upcoming season as he was.

Hamilton tore an ACL on May 18, the same day the Broncos placed James on the non-football injury list.

James, who had been working out at the Broncos' facilities before the union's request, was released four days later.

Broncos coach Vic Fangio declined to comment on James’ grievance or his signing with the Ravens.

“That’s the business side of football, not football business,” Fangio said Monday after the team's first full-padded practice. “So, I don’t go there at all.”

The Broncos aren’t obligated to pay either James ($10.58) or Hamilton ($2.18 million) their 2021 salaries because they got hurt outside of work.

That’s a point the NFL’s management council reiterated in a memo last month to all team executives and head coaches following James’ injury, a move that angered the union.

In a memo to all team executives and head coaches, the NFL’s management council restated the policy, which was collectively bargained, and encouraged teams to “remind players of the significant injury-related protection provided if they choose to work out at the club facility and the risks they undertake in choosing to train in non-NFL locations.”

After his release, James tweeted at the union, “@NFLPA if your gonna advise all of us we need you to have our backs on the other end of this.”

Attendance at offseason programs around the league increased in the days following James' injury as several teams, including the Broncos, scaled down the on-field portion of their offseason programs or even made their usual mandatory June minicamps voluntary.

A 2014 first-round draft pick by Miami, James became the league's highest-paid right tackle in 2019 when he signed a four-year, $51 million deal with Denver.

Two knee injuries limited him to 63 snaps over parts of three games in 2019, and he opted out last year because of the coronavirus.