James' unique style took him on Hall of Fame journey 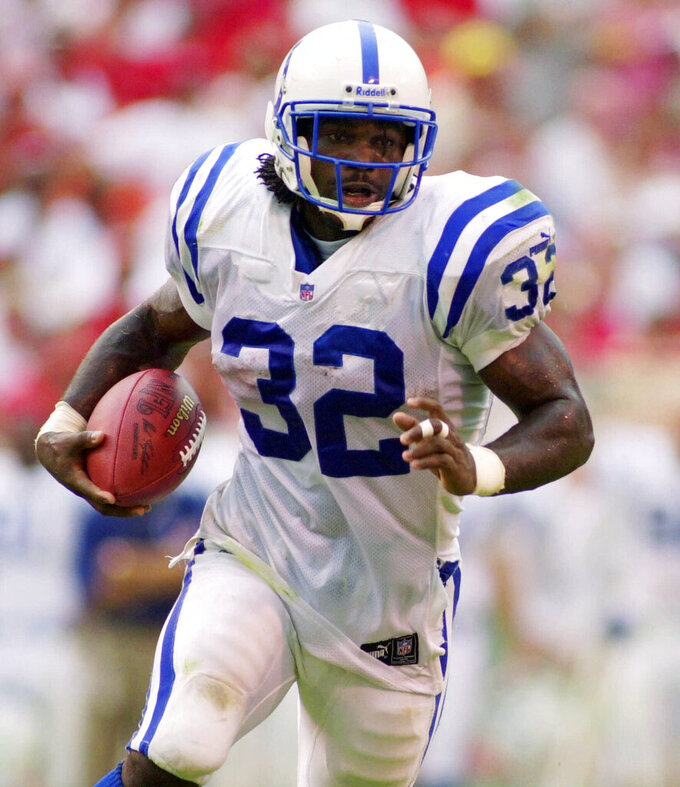 FILE - In this Sept. 3, 2000, file photo, Indianapolis Colts running back Edgerrin James (32) takes a pass from quarterback Peyton Manning 27 yards for a touchdown during the third quarter of their NFL football game against the Kansas City Chiefs in Kansas City, Mo. The man drafted fourth overall in 1999 — ahead of Heisman Trophy winner Ricky Williams and as the hand-picked replacement for Marshall Faulk — carved out his own Hall of Fame career with a gritty work ethic, a freewheeling personality and a commitment to stay true to his roots.(AP Photo/Ed Zurga, File)

It made him a perfect complementary piece to Peyton Manning and Marvin Harrison in Indianapolis.

The man drafted fourth overall in 1999 — ahead of Heisman Trophy winner Ricky Williams and as the hand-picked replacement for Marshall Faulk — carved out his own Hall of Fame career with a gritty work ethic, a freewheeling personality, and a commitment to stay true to his roots.

“I figured out you could still be yourself and accomplish what you wanted to do," he said recently while preparing to finally give his induction speech next week after a year-long delay due to the COVID-19 pandemic. “I didn’t have to put on a silly face or a hat, I found that you could be successful and still be yourself."

When he arrived in Indy, many weren't sure what to make of the guy with dreadlocks and gold teeth — or how he would be fit in the locker room.

James once said he hoped to be a tourist when his playing days ended and later downplayed his absence from offseason voluntary workouts by explaining he understood the difference between voluntary and mandatory.

But football was James' top priority and nothing deterred him from improving his craft.

“As long as he was a good player or a good teammate, I didn't care how he came across to the media,” said Hall of Fame executive Bill Polian, who drafted James. “I cared about how he did his job and he always did his job. He did it in incredible fashion."

In 11 seasons with the Colts, Arizona Cardinals and Seattle Seahawks, James logged 3,028 carries and 12,246 yards. He caught 433 passes for 3,364 yards receiving and scored 91 career touchdowns, tied for No. 31 overall. He won two league rushing titles, the 1999 NFL Offensive Rookie of the Year Award, was a two-time All-Pro, a four-time Pro Bowler and a member of the NFL 2000s All-Decade Team.

While he never played in a Super Bowl with the Colts, he was part of Arizona's 2008 NFC championship team. Colts owner Jim Irsay sent James a ring from Indy's Super Bowl-winning 2006 team — after the third member of Indy's vaunted triplets left in free agency following the 2005 season.

“You respect it and appreciate it because they didn’t have to do that," James said. “I was still part of the team. It was just business and you go about your business. As far as the Colts, that’s home. They’re the one that brought me in and to me it’s still home."

The circus-like catches and nifty runs made the highlights, but James contributed in less noticeable ways, too.

He took the lessons he learned in Immokalee, Florida and combined them with the pass-blocking sessions he attended at the University of Miami and became one of the league's best protectors. Manning never forgot.

“I’m going to his party (next) Saturday night because he’s one of my favorite teammates of all-time,” Manning said during preparation for his own induction ceremony.

James' long journey began at the local public high school where the powerhouse Hurricanes found him. At Miami, he primarily shared carries until his breakthrough moment in early December 1998: 39 attempts, 299 yards and the winning score in an upset of No. 3 UCLA.

“He was special from the beginning," said Irsay, who will introduce James in Canton, Ohio. “It’s not what they say or even how they say it or how they look or how they dress. It’s that feeling you get when you’re in a room with someone like that, a special person who is going to do special things."

After going 3-13 in 1997 and 1998, Polian figured with three quarterbacks slotted ahead of the Colts in the draft it gave him a chance to trade the disgruntled Faulk, select his replacement and collect additional picks.

Most expected the Colts to take Williams or trade the pick to New Orleans for all six of its selections. Instead, Polian threw a curveball by selecting James.

“He had superior acceleration in the hole, superior ability to block, superior ability in the passing game to run routes and make people miss," Polian said. “I thought Ricky was more of a downhill power runner and didn’t fit what we did necessarily."

He stayed in shape and in contact with Manning and opened the regular season with back-to-back 100-yard games. James finished the season with a league-high 1,553 yards rushing as the Colts capped a record-breaking single-season 10-win turnaround with a playoff trip.

Nobody questioned James' skills again until he tore the ACL in his left knee in 2001. Knowing the injury had ruined the careers of other running backs, James was intent on not letting it derail him, and committed himself to learning the finer points of the game.

“It made me a better player because when I was young, I was just running. Just give me the ball and I’ve got this,” he said. “But when I got hurt, I had to learn the game of football a whole lot better, which now allows me to teach it to my son.”

He topped the 1,000-yard mark in five of the next six seasons before finishing his career in Seattle in 2009, with one final appearance in Indy that season. When James' highlights played that October day, the sellout crowd roared for the man who helped make football as fashionable in Indianapolis as it was in Florida.

“I appreciate every time I put the ball in that hand and was able to do what I was blessed to do," he said. “Just to be in the NFL and able to play the same game I did as a youth football player, that’s the thing that stands out. I was able to play the game and keep it going."