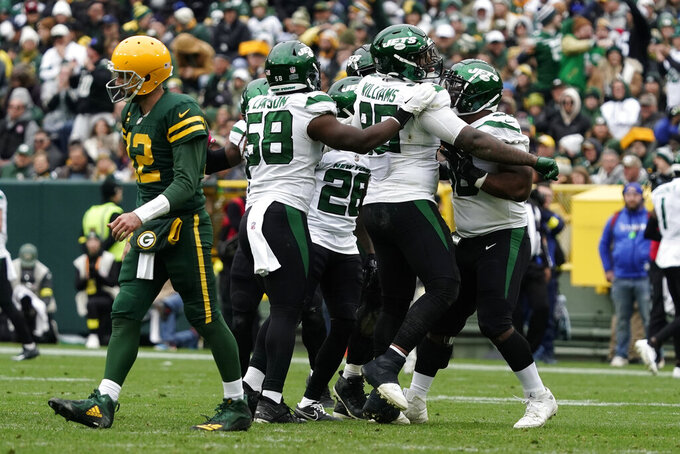 FLORHAM PARK, N.J. (AP) — Quinnen Williams kept bulldozing his way into the backfield and getting in Aaron Rodgers' face.

The New York Jets' defensive line was downright dominant in a 27-10 victory Sunday at Green Bay. And it's a major reason the team is 4-2 and off to its best start in seven years.

“The sky's the limit for this group, and you can feel it,” said Curry, who made his Jets debut Sunday after health issues kept him sidelined since signing with New York in March 2021.

The line is arguably the Jets' best and most talented unit, setting the tone for the rest of the defense with its collective ability to rush the passer and stuff the run — alleviating some of the pressure on the linebackers and secondary in the process.

Against the Packers, the Jets sacked Rodgers four times — two by Williams and one each by Franklin-Myers and Rankins — and registered nine quarterback hits. Rodgers couldn't find any consistency and Green Bay finished 4 for 16 on third down.

“As a defense,” Williams said, “we're striving for perfection.”

There's still a ways to go for that, of course. But the early returns certainly are positive.

After all, the Jets are ranked No. 9 in total defense this year after ranking last in the league last season. Some skeptics pointed to New York beating backup quarterbacks in wins over Pittsburgh and Miami. But defeating Rodgers has provided a sense of legitimacy to many of those impressed by what they've seen from the Jets' defense.

“I don’t think this was a statement game,” Williams insisted. “It was coming in and doing our job, playing football on Sunday as a unit."

And Williams is a major part of that as the leader of the group.

The fourth-year defensive end was already off to a great start to the season but turned it up a notch against the Packers. He had two sacks, five tackles, three quarterback hits, two tackles for loss, a forced fumble and even blocked a field goal.

“He keeps doing this and there’s no reason why he shouldn’t be Pro Bowl, All-Pro, all the different accolades you can get,” Saleh said. “He’s playing at that type of level.”

Saleh and defensive coordinator Jeff Ulbrich took some criticism early in the season when they insisted their rotation on the line was the best way to keep all the players fresh and effective. It's certainly working right now, with the Jets constantly rolling guys in and out to give opponents fits.

“When you're that deep across the board, you've just got to be OK with the role,” Curry said. “And do it to the best of your ability, so when your number's called, you've got to be ready to make the play.”

New York's special teams unit made a big difference at Green Bay. Williams' blocked field goal attempt in the second quarter kept the game scoreless at the time. In the third quarter, rookie Micheal Clemons blocked a punt and Will Parks scooped up the ball and ran 20 yards for a touchdown that gave the Jets a 14-point lead. The only blemish was a missed 53-yard field goal by Greg Zuerlein.

The Jets went 1 for 11 on third down against the Packers, and that has been an area of concern for the offense throughout the early part of the season.

Quincy Williams. The older brother of Quinnen was carted off the field three weeks ago with what appeared to be a potentially season-ending ankle injury. He recovered quickly and had a team-leading 14 tackles in his return.

Elijah Moore. The second-year wide receiver had no targets in the passing game Sunday and raised some eyebrows on Twitter a few hours after the win when he intimated he was disappointed with the lack of work.

“If I say what I really wanna say…I’ll be the selfish guy…we winning,” Moore said while quote tweeting a post from a reporter pointing out his zero targets. He added that he's “grateful,” although the win was bittersweet. “I’ll be solid,” he said. “So I’ll just stay quiet. Just know I don’t understand either.”

Moore, who has 16 catches for 203 yards and no touchdowns this season, also tweeted that he supports his teammates. He and Saleh spoke Monday.

“He's fine,” Saleh said. “He's a competitive young man. Like everybody, when you're a competitor like him, he wants to contribute. ... I've got no problem with Elijah. He's one of our high-character individuals and love him to death. Eventually, the production part that he's hoping for will come."

Rookie DE Jermaine Johnson missed the game with an ankle injury. He'll continue to be evaluated this week.

Plus-48 — The Jets have outscored opponents 68-20 in the fourth quarter of games this season, the biggest scoring margin in that period in the NFL.

The Jets stay on the road — where they're 3-0 — to take on the Denver Broncos, who are 3-point favorites, according to FanDuel, despite being 2-4 after losing 19-16 in overtime to the Los Angeles Chargers on Monday night.