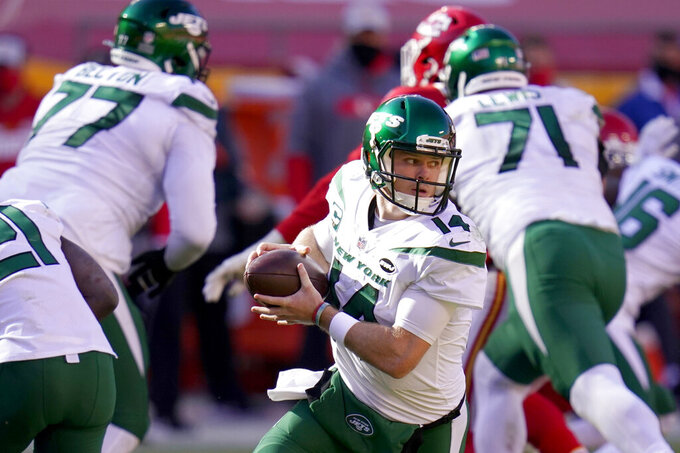 FILE - In this Nov. 1, 2020, file photo, New York Jets quarterback Sam Darnold (14) rolls out of the pocket during the second half of an NFL football game against the Kansas City Chiefs in Kansas City, Mo. When he has been healthy and had some help around him, Darnold has looked decent, though decent is hardly what you want from supposedly the franchise's future. (AP Photo/Jeff Roberson, File)

Coach Adam Gase announced Friday that Darnold will start Sunday against the Miami Dolphins after the QB's injured right shoulder progressed throughout the week, barring any setbacks.

“Unless something changes today, which I don’t anticipate,” Gase said, “everything looks good to go.”

After practice, Darnold wasn't listed with an injury on the team's final report and it sounded as though the quarterback was counting on being back under center to try to lead the 0-10 Jets to their elusive first win.

“I feel really good,” said Darnold, who was a full participant at practice for the second straight day. “I'm continuing to take it day by day at this point, but I felt really good today and yesterday.”

Darnold missed the last two games against New England and the Los Angeles Chargers as Joe Flacco started in his place.

“It's been a good week for Sam,” Gase said. "From the last time that we were going through a week before that New England game, the way he's throwing the football right now, you can tell there's a big difference as far as the control, the velocity, his change of pace on throws.

“It just looks a lot different than the last time he tried to make a run at going to play in a game.”

Darnold was first hurt against Denver on Oct. 1, when he sprained the AC joint in the shoulder on a hard tackle to the turf. He reinjured it at Kansas City on Nov. 1 on another hard hit and missed the next two games.

Darnold, whose future with the team is uncertain beyond this season, said the toughest part of dealing with the injuries has been the redundancy of the rehabilitation process and trying to stay patient.

“Now that I can feel good and really trust myself that I'm out there at 100%, I think that's the biggest thing for me mentally,” he said. “I can't wait to go out there and play Sunday.”

Darnold struggled in the six games he has played with just three touchdown passes and six interceptions. While New York didn't win, Flacco has been solid in the last two games with five TD throws and two INTs while helping the offense move consistently.

All three of the Jets' starting wide receivers — Jamison Crowder, Breshad Perriman and Denzel Mims — played together for the first time in those games with Flacco. Perriman was limited Wednesday and Thursday with a shoulder ailment, but was a full participant Friday. The game Sunday would mark the first this season with Darnold on the field with all of them, and that could add another boost to the offense.

“We're excited for him to be able to go out and play with all these guys and get out there,” offensive coordinator Dowell Loggains said. “It's been a hard couple of weeks for Sam not being able to play, but he's been grinding through and doing everything he could to get ready for this game. We're definitely excited to have him back with those three guys, playing together for the first time.”

Added Darnold: "Yeah, it's going to be nice playing with those guys and getting to play with them in a game, it'll be good."

One of the main concerns leading into this week was whether Darnold's shoulder would be able to sustain another hit without him having to be sidelined.

“I think it's going to be fine. The doctors are saying it'll be fine,” Darnold said. “I'm trusting what they say and I'm going to go out there and do what I do and play my game.”

The Jets are confident in the health of the quarterback's shoulder, and they won't change the game plan to be more conservative to protect him.

“We have to call this game and we put plays in this week based on him being healthy,” Loggains said. “If you're going to play in a game like this, you need to be ready to go and be able to execute the full offense. That was the biggest decision, seeing where Sam's at and how much he can handle. We feel good about his health and everything he can do.”

In other injuries: right tackle George Fant didn't practice for the third straight day with knee and ankle injuries and was listed as doubtful to play. Linebacker Patrick Onwuasor (hamstring) was ruled out after sitting out for the second day in a row.