Jets rule out RB Le'Veon Bell vs. Dolphins with illness 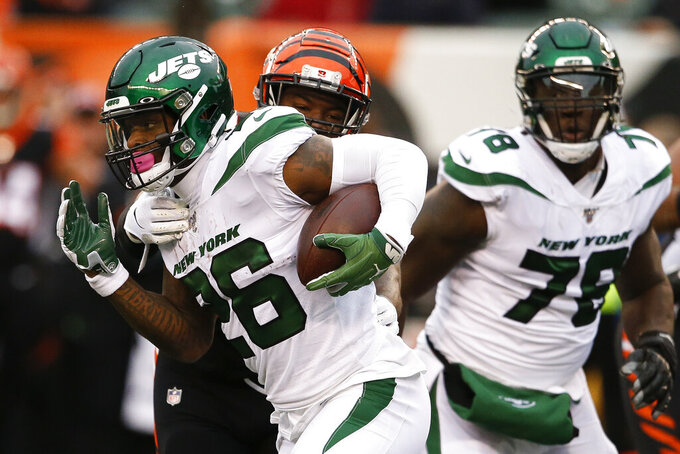 NEW YORK (AP) — Jets running back Le'Veon Bell has been ruled out for New York's game against the Miami Dolphins on Sunday because of an illness.

Bell practiced fully on Wednesday, but then sat out Thursday and Friday. He was listed Friday as questionable for the game after being sent home to rest. The team announced Saturday that Bell would not play.

The Jets will be without a few other starters against Miami. Cornerback Brian Poole was already ruled out with a concussion, and safety Jamal Adams is listed as doubtful and unlikely to play with a sprained left ankle. Cornerback Arthur Maulet, who started the last four games, is also doubtful with a strained right calf.

With Bell sidelined, Bilal Powell and Ty Montgomery are expected to assume most of the carries out of the backfield for the Jets. Josh Adams could also see some snaps against the Dolphins.

Powell is ninth on the Jets' career rushing list with 3,571 yards and needs only 19 to pass Bill Mathis for eighth.

This will mark the first game Bell will miss this season, his first with the Jets after sitting out last year in a contract dispute with Pittsburgh. Bell, who signed a four-year, $52 million contract with New York in March that included $35 million guaranteed, has not put up his usual spectacular statistics this season as the Jets' offense has struggled with consistency under Adam Gase.

The 27-year-old Bell is averaging a career-low 3.2 yards per carry and hasn't had a game in which he has run for more than 70 yards. He has 589 yards and three touchdowns on the ground, and 55 catches for 403 yards and a score.

Powell, the team's longest-tenured player, has rushed for 125 yards on 32 carries and caught four passes for 14 yards in limited action while playing behind Bell. He was a fourth-round draft pick in 2011.

Montgomery, who signed with New York as a free agent in the offseason, has 60 yards on 19 carries and eight receptions for 54 yards.

Adams was Philadelphia's leading rusher last season, but has played in just three games for New York after spending much of the year on the practice squad. He has 12 yards on eight carries.