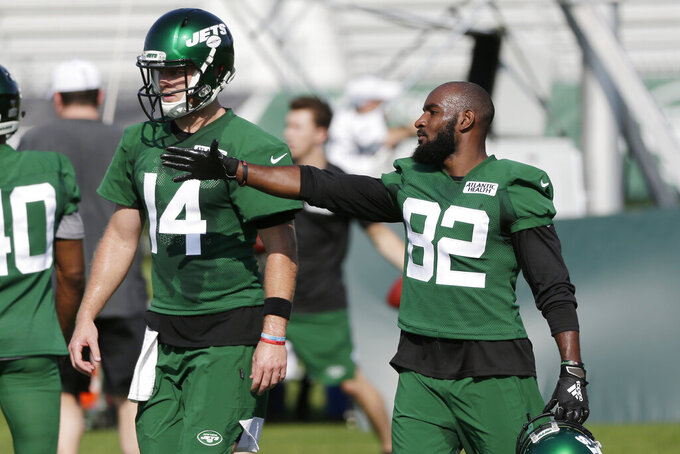 The wide receiver left practice Monday with a foot injury and coach Adam Gase said Crowder would have an MRI to determine the nature and severity.

Crowder was hurt late in practice Monday after having a good day to that point. The receiver walked with a bit of a limp to the sideline, where his left foot was examined by trainers. After a few minutes, Crowder took off both shoes and walked inside the facility.

Crowder signed a three-year, $28.5 million contract with the Jets in March after spending his first four NFL seasons with Washington.

He quickly developed a rapport with Sam Darnold through the offseason, and it has continued during training camp. The two connected for a long touchdown early Monday, and Crowder also made a nice grab in traffic for a big gain.

"I mean, he's so quick and everyone knows how quick he is, but, man, he's fast, too," Darnold said. "I think he can hit another gear, too. He's got game speed."

Crowder is expected to be New York's primary slot-type receiver alongside Robby Anderson and Quincy Enunwa, giving the Jets a starting pass-catching trio with different skill sets and presenting a challenge for defenses.

"I think we complement each other really well," Crowder said Saturday. "Robby, he's more the fast, take-the-top-off type of guy and defenses have to honor that. Q, he's the hard-nosed (type), you know, catch, run a couple guys over. That's tough for defenders."

Second-year receiver Deontay Burnett took Crowder's spot in the starting offense after the veteran came out, and he did a fine job filling in. Burnett, a former teammate of Darnold's at USC, had a touchdown catch in the red zone. He's in the mix for a primary backup role this season.

"When a guy goes down, the next guy has to step up," Gase said. "You just keep playing, move some things around, call some different plays, feature other guys. That's just part of football."

Gase said backup offensive tackle Brent Qvale won't need surgery on his right knee after he was carted off the field Sunday. It appears he wasn't as seriously injured as first feared, but Qvale won't be available any time soon.

"It looks like he's going to be out a while," Gase said. "It doesn't end his season, but I think we're going to lose him for a while."

NOTES: RB Le'Veon Bell practiced fully after coming out twice Sunday while dealing with cramps. He had perhaps his best day of camp, breaking off a few long runs in team drills. ... During an autograph session with fans Sunday, Darnold signed one person's speeding ticket. "Yeah, I didn't know if I should sign it or not," he said, laughing. "I wasn't sure what to do and then he told me to sign it. I'm sure if I got in trouble for whatever, they could sign it off. But, I don't know." Then, a reporter pointed out that the violation on the ticket was for about $95. "Was it?" Darnold said. "I didn't give him my card or anything. So, I'm all right." ... DE Leonard Williams is entering the final year of his rookie deal, and it's uncertain if the Jets and his agents have approached a contract extension. Williams, who has just seven sacks the last two seasons, could be in for a big payday — from the Jets or another team as a free agent — if he has a good year on the field. "That's definitely something that's a motivation," Williams said. "As much as I don't want to focus on my contract, that's still another form of motivation for the season." ... The Jets have their first day off from practice in camp on Tuesday.