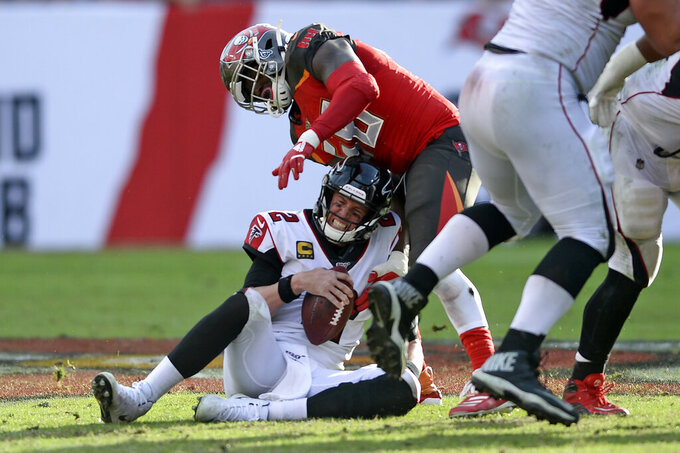 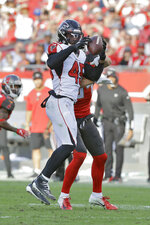 TAMPA, Fla. (AP) — Dan Quinn and the Atlanta Falcons can hardly wait to get started again.

A strong finish to a disappointing season may not make them feel better about going 7-9 for the second straight year. Rebounding from a 1-7 start to save the coach's job, however, provides some hope for 2020.

“Obviously it's disappointing to have this be the last game and the last moments of this team," Quinn said Sunday after the Falcons rallied to close the season with a 28-22 overtime victory over the Tampa Bay Buccaneers.

“Usually a win doesn't carry into the next season. But in this case, I don't know how it couldn't," the coach added. “Because if you were a part of this team and went through the struggles of the first half, we've come out the other end tougher, stronger and more resilient than we were at the start of the season. ... If you can't grow stronger from that, I'd be surprised."

Deion Jones intercepted Jameis Winston on the first play of overtime and returned the ball 27 yards for a touchdown to give Atlanta its sixth win in eight games, as well as a second-place finish in the NFC South.

Winston became the first Tampa Bay quarterback to pass for 5,000 yards in a season, but another non-playoff year for the Bucs ended on a sour note.

The Falcons (7-9) kicked two field goals in the final 6:27 of regulation, including a 33-yarder as time expired, to send it to the extra period.

The game ended abruptly when Jones broke in front of intended receiver Cameron Brate and skipped up the sideline to set off an end-zone celebration.

“It was a cool way to end it, with the kick at the end of regulation and then Deion to come up with the pick-6," Atlanta quarterback Matt Ryan said. “We've been through a lot of ups and downs, and to finish it off the right way was rewarding."

Ryan completed 30 of 51 passes for 313 yards and one touchdown for the Falcons. In addition to forcing three turnovers that led to nine points, the Atlanta defense held Tampa Bay scoreless in the second half.

"I just broke on the ball and got in front of it. Secured it and scored," Jones said. “We finished strong and we've got momentum going into next season. We've just got to pick up where we left off.”

Winston threw for 201 yards, two touchdowns and two interceptions, hiking his NFL-leading total to 30. Ronald Jones II had the first 100-yard rushing performance and Breshad Perriman topped 100 yards receiving for the third straight week for the Bucs (7-9), who are missing the playoffs for the 12th consecutive year.

"It smells as bad as it could possibly smell," Tampa Bay coach Bruce Arians said of his team missing out an opportunity to finish .500 after a 2-6 start.

Ryan only got the Falcons into the end zone once, throwing a 35-yard TD pass to a wide-open Ty Sambrailo, a 6-foot-5, 311-pound backup offensive tackle. Younghoe Koo kicked field goals of 27, 33, 45, 42 and 33 yards, while his Bucs counterpart, Matt Gay, was 0 for 3 on field goal attempts.

Winston began the day leading the NFL in passing yards and finished with 5,109 yards and 33 touchdowns — both franchise single-season records. He threw TD passes of 2 yards to Cameron Brate and 24 yards to Perriman to help the Bucs escape an early 10-0 hole.

Perriman, who stepped up in the absence of injured Pro Bowl receivers Mike Evans and Chris Godwin, had five catches for 134 yards. Jones rushed for 106 yards on 11 attempts.

Meanwhile, linebacker Shaquil Barrett had three of Tampa Bay's six sacks of Ryan. Jason Pierre-Paul had two and forced a second-quarter fumble that rookie Devin White returned 91 yards for a TD that gave the Bucs a 14-13 lead.

Falcons: Cornerback Kendall Sheffield (ankle) limped off in the second quarter and did not return.

Buccaneers: Godwin was inactive for the second straight week with a hamstring injury, finishing the season with career highs of 86 receptions for 1,333 yards and nine touchdowns. ... Cornerback Sean Murphy-Bunting left in the second quarter with an ankle injury and did not return. ...Defensive lineman Rakeem Nunez-Roches (foot) left in the third quarter and did not return.

Falcons: The Falcons announced earlier in the week that Quinn, who guided Atlanta to the Super Bowl three years ago, will return for a sixth season in 2020. General manager Thomas Dimitroff will keep his job, too, and assistant head coach Raheem Morris will take over responsibilities as defensive coordinator.

Buccaneers: The biggest offseason decision will be whether to retain Winston, who earned $20.9 million this season in the final year of the contract he signed as the No. 1 overall pick in the 2015 draft. The Bucs have never signed one of their starting quarterbacks to a second contract. Arians reiterated no decision on the fifth-year pro’s future has been made.

“We'll take our time in evaluating," Arians said. “There's so much good, and there's some outright terrible. We've got to weigh that and see what happens. ... There's a lot more that goes into it than just interceptions. It will be a full evaluation.”