Keep it clean and the Lombardi Trophy could be yours 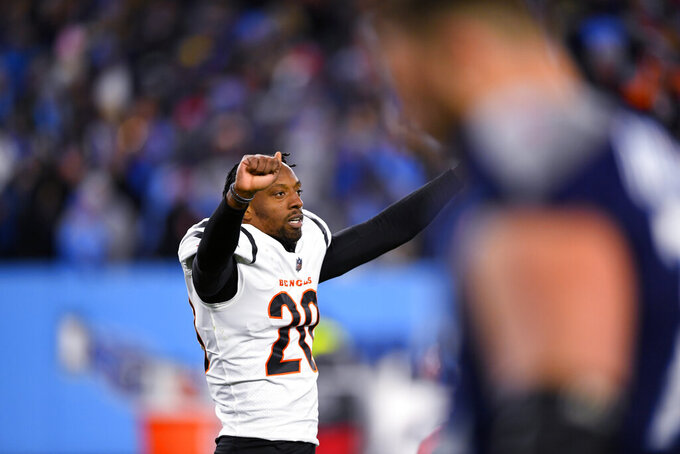 That's a mantra both the Cincinnati Bengals and Los Angeles Rams should have adopted as they head to Sunday's Super Bowl.

Limit the turnovers and costly penalties. Don't waste timeouts, particularly in the second half. Get physical rather than fancy. Being efficient can trump being spectacular.

All they need to do is look back to the last time the Los Angeles area hosted a Super Bowl nearly three decades ago. That game at the Rose Bowl became an almost laughable rout as the Buffalo Bills kept surrendering the ball to the Dallas Cowboys.

“Just going to go out there and impose our will and play physical and let the chips fall where they may,” Bengals cornerback Eli Apple said.

Echoed Rams All-Pro cornerback Jalen Ramsey: “Do our thing and do it the best we can. That's winning football.”

The Rams are 4-point favorites, according to FanDuel Sportsbook, but they might not even be in this Super Bowl in their new $5 billion SoFi Stadium had 49ers safety Jaquiski Tartt not dropped an easy interception late in the NFC title game. Bringing in veteran Matthew Stafford at a hefty price in draft picks — along with a younger quarterback, Jared Goff, who was part of the LA team that lost in the 2019 Super Bowl, when he struggled mightily — has paid off richly for the Rams. Stafford’s 49,995 yards passing and 323 TD passes are the most for a QB making his first Super Bowl appearance. Stafford needs 209 yards passing to become the sixth player to reach 6,000 in a single season.

But he also puts the ball up for grabs at times. That needs to be limited on Sunday.

“We went out and got him because we thought it was a chance to be able to get a great player of his magnitude,” Rams coach Sean McVay said of Stafford, who spent a dozen seasons playing well without winning in Detroit. “What he’s done, he’s elevated everybody around him. He’s made me a better coach. He’s made his teammates better.”

So has the guy on the other side, Joe Burrow. Like Stafford, Burrow was the top overall draft pick. His rookie season was curtailed after 10 games by a knee injury, but his second year has been so terrific he won NFL Comeback Player of the Year. His most recent production has been magnificent. And nearly spotless.

Burrow has gone from No. 1 overall pick to starting quarterback in the Super Bowl faster than anyone else. He has 15 touchdown passes and just two interceptions in his last seven games, while averaging 331.1 yards passing per game.

Rarely has Burrow gambled in the last two months, and look how that has paid off.

Of course, this matchup is about a lot more than when and where the quarterbacks throw the ball. It's about Cincinnati's offensive line — which allowed Burrow to be the most-sacked passer in the league, 51 times, nine more in a playoff victory at Tennessee — bowing up against a generational talent such as Rams defensive tackle Aaron Donald, and other top pass rushers Von Miller and Leonard Floyd.

“This is a special group of talented guys on this defense,” said Miller, who won the 2015 NFL championship in Denver, when he was Super Bowl MVP. “I’m talking about one of the best groups I’ve ever been fortunate enough to be a part of. We work together as a team, and it just gets better each week."

It's about Ramsey being a shutdown cover guy against Offensive Rookie of the Year Ja'Marr Chase, and the rest of the Los Angeles secondary handling Chase's compatriots, Tee Higgins and Tyler Boyd. And about the same on the other side, with Apple and fellow defensive backs trying to slow down Offensive Player of the Year Cooper Kupp, Odell Beckham Jr. and Van Jefferson.

It's about the kicking games, which have been very solid in the postseason, continuing to perform on the sport's biggest stage.

Same for the coaches: McVay, who is accustomed to the glaring spotlight after taking the Rams to the playoffs in four of his five seasons, and Taylor, his former assistant, in his first postseason as a head man. McVay did not perform well, nor did his team, in that Super Bowl three years ago, looking uncomfortable against Tom Brady and the Patriots.

As difficult as it may be — and it is very difficult — it's about treating the Super Bowl in the cliched phrasing players use: just another game. There's plenty of truth to that.

“You got a job to go out there and execute and try to lead your team," Stafford said. “The game begins, and it's football. That's what we're here for.”