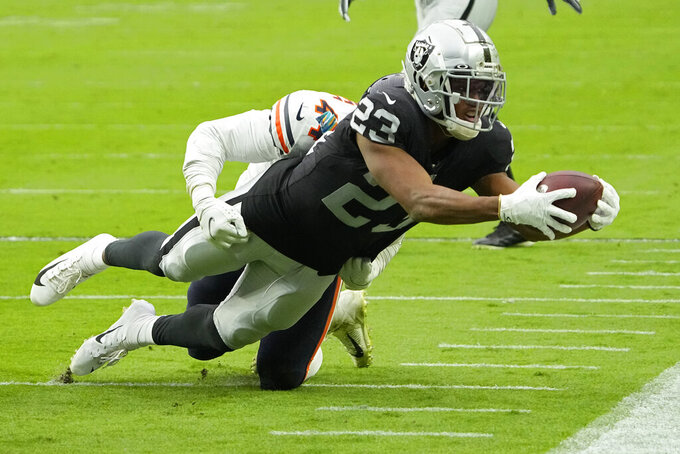 Drake has always been a case study for Sirianni, who with his coaching staff studies five players at different skill positions at the end of each season.

“You want to see how other people get their skill players the ball in the passing game, you always want to see that,” Sirianni said Wednesday. “You always want to dig and find new ideas and Kenyan Drake is always a guy I’ve watched because he’s explosive, he’s a great playmaker, and he has that dual-threat ability.”

Drake, signed as a free agent during the offseason, scored his first two touchdowns as a Raider last week in Denver, hauling in a 31-yard pass from Derek Carr at the end of the first half, then opening the second half with an 18-yard scamper into the end zone.

It was the first game under interim coach Rich Bisaccia, and with offensive coordinator Greg Olson calling the plays.

And while Drake had his number called the third-fewest times out of the backfield and was targeted by Carr just twice — he caught both passes — it’s the quality of play call Olson is aiming for to get the most out of the 27-year-old sixth-year pro.

“We have a number of playmakers on the offensive side of the ball at a number of different positions, and certainly Kenyan is one of them,” Olson said Thursday.

“He provides us that 1-2 punch with Josh (Jacobs). ... Kenyan gives us a little bit of a different pace, some routes he and Josh run differently. They both have their strengths, but certain routes we like Kenyan better than Josh, or Josh better than Kenyan.”

Carr agreed after Sunday’s 34-24 win in Denver, saying with the way Olson calls plays it’s never a matter of getting someone a breather, such as Jacobs or tight end Darren Waller. It's more so everyone keeps the next-man-up mentality while the Raiders continue to play their brand of football with the playmakers they have in the game.

“You see schematically what is best for us and when guys are hitting, that’s how it goes,” Carr said. “We are just going to play ball and whoever is in, hopefully, they capitalize.”

Which is exactly what Drake said he did Sunday after turning in 39 yards receiving on his two receptions, including his TD catch, and rushing for 34 yards on four carries, including the score that extended Las Vegas’ lead to 17 points.

“I just got a nose for the end zone,” said Drake, who has also spent time with Miami and Arizona. “I feel like if I get there I’m hungry for it, I’m starving for it.”

This week, he and the Raiders face a beleaguered Eagles rushing defense that has allowed the NFL’s fifth-highest 812 yards. Philadelphia also has the league’s third-worst defense on third downs, allowing opponents to convert 46.2% in those situations. The average distance to go on third down against the Eagles has been 6.6 yards.

Given Drake is averaging 6.2 yards per offensive touch, and the fact Olson trusted him in timely situations last week, the 6-foot-1 sparkplug could play a vital role when his number is called this week.

“I just try to make the most of my opportunities,” Drake said. “Whenever my number is called, whether it’s in the return game, pass game, running game. I mean what am I here for? I’m here to make plays so that’s what I hope to continue to do as the season goes on.”