Lance 'frustrated' with his mistakes in 49ers' loss to Bears 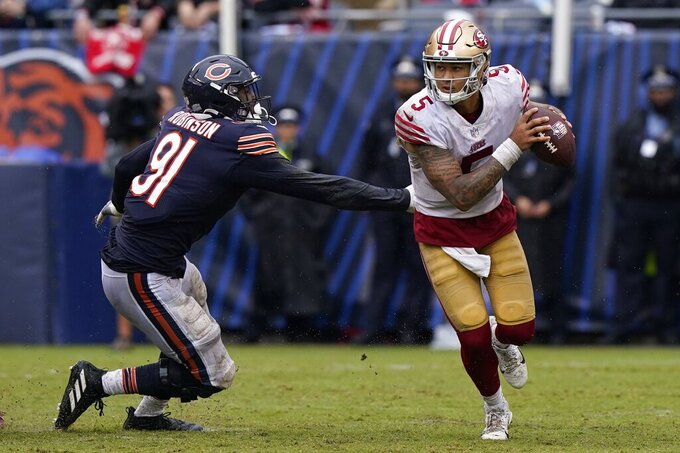 CHICAGO (AP) — Trey Lance got the keys to San Francisco's offense in July. When it comes to driving in the rain, well, that still needs some work.

With Jimmy Garoppolo watching from the sideline, Lance and San Francisco were shut down by the Chicago Bears in a 19-10 loss on Sunday. Lance threw a costly interception in his third career start, and the 49ers hurt themselves with 12 penalties for 99 yards on a rainy afternoon at Soldier Field.

“Just too many mistakes I still have to clean up, for sure, for me,” Lance said. “But, man, excited. Still got my head up. Excited to get ready to go next week.”

Lance was named the starter at the beginning of training camp after Garoppolo directed San Francisco to the NFC championship last season. The 22-year-old quarterback appeared in six games as a rookie after he was selected by the 49ers with the No. 3 pick in the 2021 draft.

San Francisco tried to trade Garoppolo in the offseason, but ended up keeping him around as the backup under a reworked contract.

The decision to go with Lance — along with the continued presence of Garoppolo — likely will follow the team around all season long. Lance showed why the Niners made the move in the opener, making a couple of nice throws and rushing for a team-high 54 yards, but it also looks as if there are going to be some growing pains along the way.

“Just frustrated a little bit. Feel like I’m a little better than that,” Lance said.

Lance and San Francisco played without star tight end George Kittle, who was inactive because of a groin injury. Then running back Elijah Mitchell left in the first half with a knee injury.

Asked about Mitchell, coach Kyle Shanahan said he wasn't sure how long he would be out.

“I know they thought he had a chance to come back, then they ruled him out a quarter later,” Shanahan said.

Chicago got on the board when Justin Fields passed to a wide-open Dante Pettis, and the wide receiver made his way to the end zone for a 51-yard TD with 5:32 left in the third.

After Chicago jumped in front on another Fields touchdown pass, Lance was intercepted by Eddie Jackson on San Francisco's first drive of the fourth. The Bears turned the miscue into Khalil Herbert's 3-yard TD run and a 19-10 lead with 7:21 to go.

“I’m disappointed about some of the silly mistakes we did to (ourselves),” Shanahan said. “That’s not just our young guys. It’s veterans that have done a lot of good things for us. It’s the whole team that needs to clean that stuff up to have a chance to do what we want to do.”

With the rain picking up again at the end of the fourth, Lance and the Niners were shut out the rest of the way. Lance connected on 13 of 28 passes for 164 yards on the day, including a glaring miss with Tyler Kroft open down the field in the first quarter.

“We’ve got a young team. We’ll bounce back,” offensive lineman Trent Williams said. “We’ll be better next week. Anytime you let a team hang around it’s never going to be that good.”