The Latest: Dallas Stars to resume practicing on Tuesday 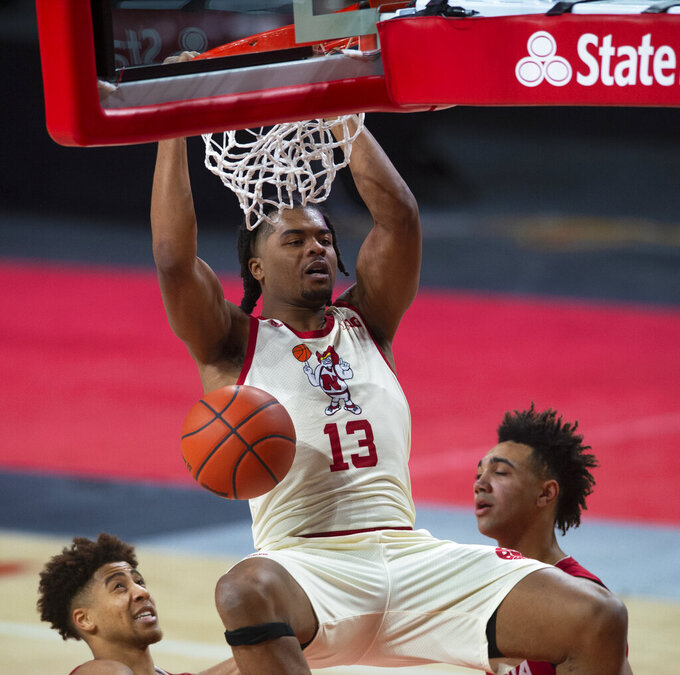 Nebraska's Derrick Walker dunks the ball over Indiana defenders in the second half of an NCAA college basketball game Sunday, Jan. 10, 2021, in Lincoln, Neb. (Kenneth Ferriera/Lincoln Journal Star via AP)

Dallas had its first three games — at Florida on Thursday and Friday, and at Tampa Bay on Sunday — postponed. The defending Western Conference champions are now set to open at the Lightning on Jan.19 in a Stanley Cup Final rematch.

Dallas players and staff have been self-isloating and the team’s training facilities were closed since Friday amid contact tracing.

The Atlanta Hawks are targeting Jan. 26 to allow a limited number of ticketed fans to attend games at State Farm Arena.

The Hawks have only permitted a smattering of family and friends since the start of the NBA season.

The team initially hoped fans could return for the annual Martin Luther King Jr. Day game on Jan. 18. Now, with Georgia and the nation experiencing a surge in COVID-19 cases, that has been pushed back to at least the Jan. 26 game against the Los Angeles Clippers.

The Hawks will reopen to fans at 10% capacity, limiting attendance to about 1,700 per game. That will be gradually increased through the rest of the season if conditions improve with the coronavirus pandemic.

The Nebraska men’s basketball team has paused team activities because of a positive COVID-19 test in the program, and a Wednesday home game against No. 14 Illinois has been postponed.

The schools are working with the Big Ten to reschedule. No determination has been made on how the pause will affect Nebraska’s games scheduled after Wednesday.

A positive COVID-19 test left the Cornhuskers without starting forward Yvan Ouedraogo in a loss to Indiana on Sunday.

Arizona State’s women’s basketball team has postponed its games this week against Oregon State and No. 10 Oregon due to COVID-19 issues.

The Sun Devils were scheduled to play the Beavers on Friday and the Ducks on Sunday.

The schools will work with the Pac-12 to reschedule the games.

The Sun Devils also had last week’s games at Washington and Washington State postponed due to the novel coronavirus.

The Buffalo Bills have been granted permission to have a limited number of fans attend their second straight home playoff game.

Attendance for the Bills’ AFC divisional-round playoff against the Baltimore Ravens on Saturday night will be capped at 6,700. That’s the same number of fans who were allowed to attend Buffalo’s 27-24 win over the Indianapolis Colts in a wild-card playoff this past weekend.

It marked the first time fans were allowed to attend a Bills home game this season, and under the condition each person entering the stadium test negative for COVID-19 within 72 hours of kickoff. The same requirements apply to the game Saturday.

Gov. Andrew Cuomo made the announcement on Monday by calling early indications from this past weekend as being a success. Of the 7,157 people who took part in the rapid testing, 137 tested positive for the virus. It’s unclear how many who attended the game might have tested positive afterward.

The Bills have already announced the game is a sellout, with tickets limited to their season ticket-holders who rolled over their payments from last year into 2021.

The College Football Playoff championship game between Alabama and Ohio State is being played at a COVID-19 vaccination site.

The state of Florida began offering vaccines last week at the Miami Dolphins’ stadium, where the title game kicks off Monday night. The vaccine is available there to healthcare workers and those 65 and older.

The stadium has also been a coronavirus testing site. Vaccination and testing operations closed early Monday so the site could prepare for the game.

Because of the pandemic, attendance will be limited to 16,000 for the final game of the college season. COVID-19 caused the postponement or cancellation of nearly 130 games this season.

European rugby officials have suspended their club competitions the Champions Cup and Challenge Cup after French clubs were ordered by their government not to play.

The government on Saturday wanted French clubs to stop playing British sides this month because of the surge of coronavirus cases in Britain, which is in lockdown.

Both competitions have two rounds of group matches to play.

"While respecting all further directives by governments and local authorities, and prioritizing the health and welfare of players and club staff, EPCR, in conjunction with its shareholder leagues and unions, remains committed to trying to find a solution which will enable it to resume and complete the tournaments as soon as practicable,” EPCR said in a statement on Monday.

The second one-day cricket international on Tuesday between the United Arab Emirates and Ireland has been postponed, and the series is at risk of being canceled.

Both boards are discussing rescheduling the other ODIs in Abu Dhabi that were to be played on Thursday and Saturday.

The teams have played only one of the schedule four, last Friday. Then three UAE players got the virus and the match on Sunday was postponed to Saturday.

Browns coach Kevin Stefanski expects to be back with his team this week after missing Sunday night’s playoff win over Pittsburgh with COVID-19.

Stefanski tested positive for the novel coronavirus last week and had to watch Cleveland’s 48-37 victory over the Steelers from his home’s basement. Stefanski admitted he nervously paced the floor during the game and has a new appreciation for what fans go through on game day.

“I don’t plan on doing that again,” he said. “I like to have some control.”

Stefanski said he lost his sense of taste, but otherwise has only experienced mild symptoms.

Following the game, Stefanski was able to celebrate with his players, who contacted him on FaceTime from Pittsburgh’s Heinz Field.

The men’s basketball game Tuesday between No. 13 West Virginia and No. 2 Baylor in Waco, Texas, has been postponed due to COVID-19 issues with the Mountaineers.

West Virginia said in a statement that it will work with Baylor and the Big 12 to reschedule the game.

Both teams last played on Saturday. Baylor’s next scheduled game is on Saturday at No. 15 Texas Tech, while West Virginia is slated to host TCU on Saturday.

The Baylor women’s basketball team has had another game postponed because of COVID-19 issues. The Lady Bears will not be able to meet the Big 12 roster threshold to play Wednesday’s game at Kansas.

Baylor (8-1) hasn’t played since its 74-50 win at TCU on Jan. 2. Coach Kim Mulkey missed that game after being exposed at Christmas to a family member who tested positive for the virus. Mulkey had tested negative three times before a positive test on Jan. 4, the day she planned to return to the team. The team paused team activities after Mulkey’s positive test.

The Lady Bears postponed home games last week against UConn and Kansas State. Their next scheduled game is Saturday at home against Iowa State.

Scottish soccer authorities have suspended the professional game below the top two divisions for three weeks because of an escalation in coronavirus cases in the country.

The Scottish Football Association says the top-flight Premiership is exempt “provided it continues to adhere to the stringent testing protocols” while teams in the second-tier Championship must start weekly testing.

Scottish FA chairman Rod Petrie says “the risk of mass transportation of untested, largely part-time players is something that cannot be sustained as the cases continue to rise and available hospital beds become increasingly scarce.”

A national lockdown is in place in Scotland until the end of January at least.