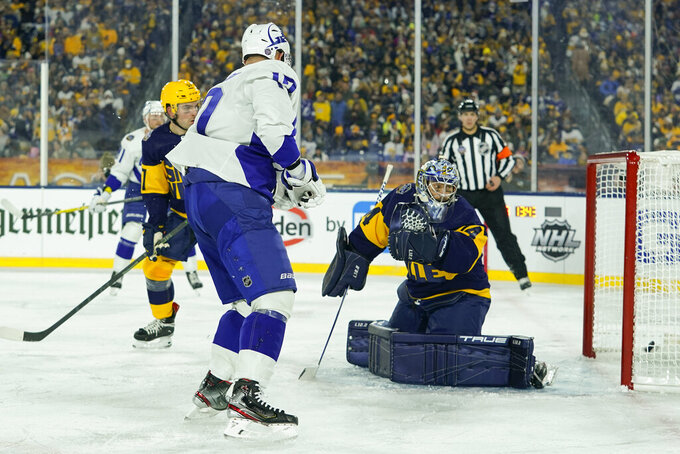 NASHVILLE, Tenn. (AP) — The Tampa Bay Lightning sure know how to spoil a great party.

Steven Stamkos scored the game-winner at 11:31 of the third period as the Lightning beat the Nashville Predators 3-2 Saturday night to put a damper on the first outdoor NHL game in Music City.

Stamkos also had two assists. Nikita Kucherov had a goal and an assist, and Brayden Point also scored the first goal as Tampa Bay became the NHL's 27th franchise to finally play an outdoor game. The Lightning now have won four straight to pull within a point of Atlantic Division-leading Florida.

“I know one team wins the game, but I don’t know how anybody in the end can leave on a downer after the event that was put on,” Lightning coach Jon Cooper said of the entire night. “It was exceptional.”

Tanner Jeannot and Filip Forsberg each scored a power-play goal for Nashville, which dropped to 0-2 in outdoor games. The Predators also snapped a two-game win streak.

“Obviously, we wanted to send people over to Broadway happy, and now I guess a couple will be, at least the Lightning fans,” Forsberg said. “But it was a great atmosphere. I thought the game was a hard-fought game all the way to the end. Two power-play goals each, the one 5-on-5 goal for them was obviously the decider.”

This was the outdoor game the Predators, and Nashville, had wanted for years at Nissan Stadium, the home of the NFL's Tennessee Titans, across the Cumberland River from their own arena. Nine players remain from Nashville’s first outdoor game in the 2020 Winter Classic in Dallas.

Music City and the NHL turned this event into a party starting hours before the puck dropped with hockey jerseys filling downtown Nashville with fans lined up ready when the gates opened.

Predators forward Matt Duchene says it’s great when they have their usual 17,000 fans but called it “insane” with a sellout crowd of 68,619 on hand. Miranda Lambert and Dierks Bentley sang during the first intermission, just part of the artists who performed live throughout the game.

“It definitely doesn’t feel like Game 51, I tell you that,” Cooper said. “If these events are for the fans, the league hit it out of the park. What a show.”

The Nashville tradition of a catfish hitting the ice before big games continued, though with a special assist with an NFL quarterback likely the only one who could throw something from even the first row and hit the ice in the middle of Nissan Stadium’s field.

Titans left tackle Taylor Lewan brought a catfish with him onto the ice for the ceremonial puck drop, raised it in the air and then handed it to Pekka Rinne, the Predators’ longtime goalie whose No. 35 jersey was retired Thursday night. Rinne chucked the fish underarm across the ice.

Nashville fans brought their chants with them, and Jeannot gave them plenty to celebrate scoring the first goal of the game at 8:20 with 14 seconds left on the power play and his 18th of the season for the rookie.

Matt Benning went to the box with 10.7 seconds left in the first, and Tampa Bay quickly converted 58 seconds into the second. Point scored on a wrister off a pass from Kucherov to give Lightning fans something to cheer with a point in his sixth straight game.

Kucherov put Tampa Bay up 2-1 with his own power-play goal at 6:18, his third goal in three games on a wrister from the right circle. Stamkos padded the lead at 11:31 of the third with a slap shot from the left circle to cap a special night for the center in his first outdoor game in his 14th NHL season.

“It was kind of extra special to have a good game personally, but we wanted to come in here and get the win,” Stamkos said. “I was super happy with the effort we had tonight. It lived up to all the hype that you hear from some of the guys who have played in these games. You never understand it until you play in one yourself.”

Forsberg pulled Nashville within one with his power-play goal with 7:31 left.

This game also pitted two of the NHL’s winningest goalies. Andrei Vasilevskiy came in tied for the league-lead with 27 wins for Tampa Bay with Juuse Saros’ 25 victories tying him for fifth. Vasilevskiy made a flurry of saves after Nashville took its timeout with 1:31 left and finished with 26 saves to outduel Saros.

The Predators now have given up two or more power-play goals in four of their last seven games. They have the most penalty minutes in the NHL and lead the league averaging 12.7 penalty minutes per game.

DRESS FOR THE MOMENT

Both Tampa Bay and Nashville made to sure to coordinate their wardrobes before heading to this game. The Lightning went with a country look featuring denim jackets, jeans and cowboy hats with boots. The Predators went more rock ‘n’ roll with custom leather jackets adorned with musical nods and black hats.

Predators: At Seattle on Wednesday night to start a two-game road swing.