Lions off to the start Stafford and Patricia needed 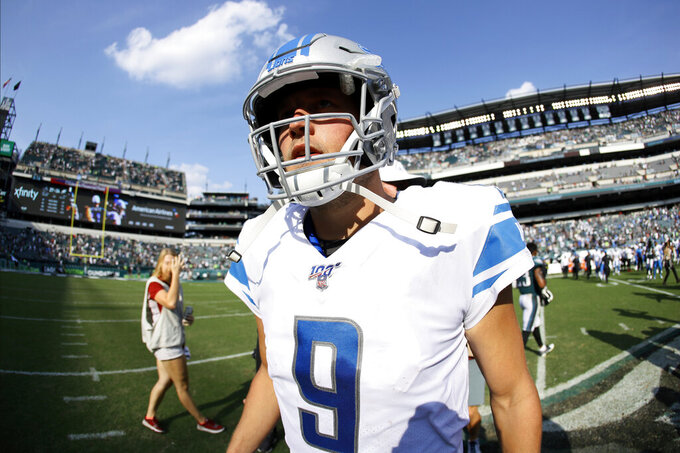 The Detroit Lions are not one of those teams. Coach Matt Patricia and quarterback Matthew Stafford were under pressure to show signs of progress in 2019, and so far they're delivering.

"There's great teams every week, and things can go either way pretty quickly, but I think the group's working really hard," Patricia said. "I think they're trying to do everything they can the right way. We've got a long way to go."

Stafford has put up big numbers at times in his career, but he's been dogged by the team's inability to beat top competition, especially on the road.

So Sunday's 27-24 win at Philadelphia resonates. Although the Eagles were short-handed because of injuries, they're still less than two years removed from a Super Bowl title.

Patricia took over the Lions before last season and the team went 6-10. It wasn't a particularly great year for Stafford, and when Detroit blew a fourth-quarter lead in its 2019 opener at Arizona, settling for a tie, it was easy to envision another dreary campaign. The next three games were against the Chargers, Eagles and Chiefs, all playoff teams last season.

Well, the Lions (2-0-1) have won the first two games of that stretch. They led 27-17 in the fourth quarter at Philadelphia before giving up a touchdown and having a field goal blocked. A couple of crucial penalties on the Eagles helped Detroit hold on.

It was a shaky finish, but if the Lions can keep winning games such as that, it will go a long way toward winning over an understandably skeptical fanbase.

A few words of caution: The previous time Detroit was unbeaten through three games was in 2011, when the Lions started 5-0 and looked poised for an extended stretch of success with Stafford, Calvin Johnson and Ndamukong Suh. Detroit ended up going 10-6 that season, lost its postseason opener and didn't make the playoffs again until three years later.

This year's Lions have given up more yards than they've gained, and all three of their games could have gone either way.

But they've put themselves in position to win, regardless of the competition.

"These are very competitive people, very much so want to win and want to do the things the right way," Patricia said Monday. "I think we truly believe that if we put the work in every single week, and we go out and approach it the right way that we should go out and be as competitive as we can be."

Detroit has allowed only three sacks this season and they were all in Week 1. The offensive line hasn't necessarily been dominant, but the Lions have done a decent job avoiding negative plays.

The running game still isn't all that productive. Kerryon Johnson scored a touchdown but finished with only 36 yards on 20 carries Sunday.

Jamal Agnew was relieved of his punt returning duties the previous weekend, but he bounced back in a big way with a 100-yard kickoff return for a touchdown against the Eagles. He also had a 24-yard punt return.

Rookie tight end T.J. Hockenson had only one catch for 1 yard, and he has only two catches in the past two games following a stirring debut in the opener. The first-round draft pick clearly has potential, but it's time to tap the breaks on talk of instant stardom.

A couple of key defensive players left Sunday's game. Defensive tackle Mike Daniels (foot) left in the first quarter and didn't return, and cornerback Darius Slay (hamstring) exited in the third quarter. Patricia had no updates on them.

32 — Touchdown passes Stafford is on pace for this season. He has six already after posting only 21 a season ago.

Unlike the Chargers and Eagles, the Chiefs very much seem to be firing on all cylinders offensively and are living up to preseason expectations.

"I wouldn't look at it as a measuring stick," Detroit defensive lineman Trey Flowers said. "It's definitely a challenge that we're willing to take — we're willing to face great quarterbacks, great opponents."