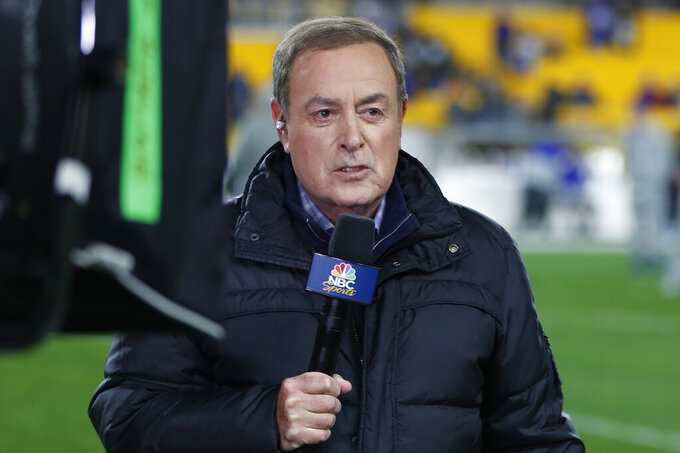 FILE - NBC Sports reporter Al Michaels reports from the sidelines during warm ups before an NFL football game between the Pittsburgh Steelers and the Buffalo Bills in Pittsburgh, Sunday, Dec. 15, 2019. Al Michaels and Kirk Herbstreit will be the announcer team when Prime Video takes over the "Thursday Night Football" package in September. The move was announced on Wednesday, March 23, 2022, ending weeks of speculation. (AP Photo/Keith Srakocic, File)

Al Michaels and Kirk Herbstreit will be the announcing team when Prime Video takes over the “Thursday Night Football” package in September.

Michaels moves to Prime from NBC. His contract with NBC ended last month after he was in the booth for his 11th Super Bowl.

“This is the new frontier in sports television and to be a part of the launch at this point in my career is both exciting and stimulating,” Michaels said in a statement Wednesday. “The NFL is the king of unscripted television, and I’m looking forward to joining Kirk to bring fans more dramatic episodes on Thursday nights this fall.”

Herbstreit, who has been with ESPN since 1996, will remain the network’s lead college football analyst and do NFL games for Prime. ESPN also announced Wednesday that Herbstreit had signed a multiyear extension.

Amazon will pay $1 billion a season to carry the games for 11 years. Prime Video’s first regular-season game will be on Sept. 15. The NFL expects to announce its schedule in early May after the draft.

Prime Video will carry 15 regular-season games and one preseason game. Games will be available on stations in the participating teams’ markets, which is the same practice when they are on ESPN and NFL Network.

The Prime Video move continues a shift in the top announcing teams on NFL packages.

ESPN announced last week that Joe Buck and Troy Aikman will call “Monday Night Football” after being Fox’s No. 1 team since 2002.

Rob Hyland — who has produced Notre Dame games and NBC’s “Football Night in America” studio show — will take over from Gaudelli as the lead producer of the Sunday night games.