Morris sees opportunity in taking over Rams' No. 1 defense 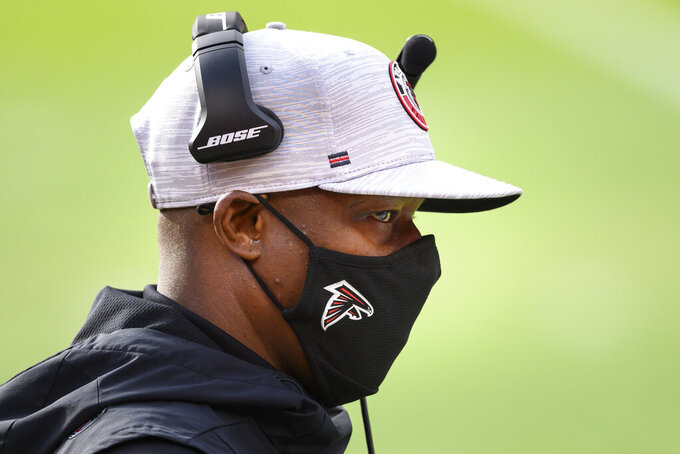 FILE - In this Dec. 27, 2020, file photo, Atlanta Falcons coach Raheem Morris watches during the first half of the team's NFL football game against the Kansas City Chiefs in Kansas City, Mo. Morris has begun work as the Los Angeles Rams’ new defensive coordinator with a plan to continue last season’s success with several new wrinkles. Morris plans to continue running a 3-4 defense with the players who finished No. 1 in the NFL in several defensive categories last season. (AP Photo/Reed Hoffmann, File)

Morris is thrilled they're back together with the Los Angeles Rams to go after a Super Bowl title.

“He’s had all the answers since 2008,” the Rams’ new defensive coordinator said Thursday. “As soon as you met him, he lit up a room. He’s got a commanding presence. You can feel the type of people that should be head coaches in this league. You feel the leadership off of them, and you can feel all the stuff that you want to know and how they’re going to go get it done, and that is him."

McVay has said much the same about Morris after they coached together for three more years in Washington, in between Morris' head coaching stints in Tampa Bay and in Atlanta.

They're back together for a third time in Los Angeles, where McVay eagerly chose Morris last month to be his most important assistant on a team with championship aspirations. The Rams showed their eagerness to build on last season's success by acquiring quarterback Matthew Stafford last month.

Morris is taking over the NFL's No. 1 defense from Brandon Staley, who had so much success in his sole season in charge that the Los Angeles Chargers hired him to be their head coach with just four years of NFL experience.

Morris, himself a former wunderkind head coach, jumped at the opportunity to follow Staley's impressive performance. Morris also realizes success is a whole lot easier to achieve with a defense built around three-time NFL Defensive Player of the Year Aaron Donald and All-Pro cornerback Jalen Ramsey.

For all his extensive NFL experience, Morris has only been a defensive coordinator in the league for five games. He took that job in Atlanta last season after filling several roles on Dan Quinn's staff over the previous half-decade, but he moved up to interim head coach after Quinn was fired, going 4-7 and getting interviews for the permanent job that ultimately went to Arthur Smith.

Morris already has a few fundamental ideas about his defense's structure and strategy. The Rams will continue to be a 3-4 base defense, but Morris plans to follow Staley's lead in installing plenty of sub-packages that will make their defensive front unpredictable and adaptable.

The Rams have run a 3-4 throughout McVay's tenure, starting under coordinator Wade Phillips in 2017. Morris praised the work of both of his predecessors.

“You’ve got to formulate things you’re doing around your players,” Morris said. “Staley did a great job of doing things that his really good players can do. There will be a lot of things that will be similar to when Wade was here, and will be similar to when Staley did it, and it’s based on the guys that you have, and the guys that we have are really talented players.”

Morris plans to move Ramsey around on his defense, just as the Rams did last year, to use his skills in numerous areas besides isolated pass coverage. He also wants to create one-on-one matchups for Donald, who faces more double teams than any player in the NFL.

But Morris seems confident the Rams can put together a scheme that matches up with last year's lofty standard.