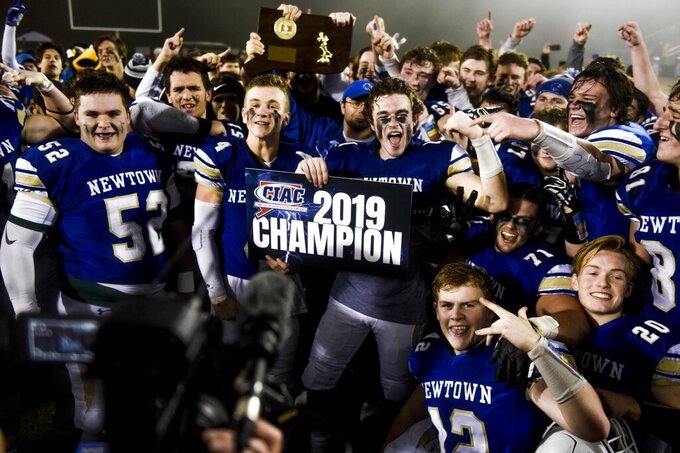 Newtown Nighthawks celebrate their win after beating the Darien Blue Wave in the final play of the Class LL state football championship at Trumbull High School Saturday, Dec. 14, 2019, in Trumbull, Conn. Newtown won 13-7. Newtown marked the seventh anniversary of the massacre at Sandy Hook Elementary School with vigils, church services and a moment of joy when the community's high school football team, with a shooting victim's brother as linebacker, won the state championship Saturday in a last-minute thrill. (Kassi Jackson/Hartford Courant via AP)

On the seventh anniversary of the massacre that killed Tricia Pinto's son Jack at Sandy Hook Elementary School, she found herself celebrating the state football championship by the team of her other son, Ben.

Ben Pinto plays linebacker for the Newtown High School Nighthawks, who won the Class LL state championship 13-7 on a 36-yard touchdown pass Saturday from Jack Street to Riley Ward as time expired. The title was the first for Newtown since 1992.

“It’s always so difficult to explain what it feels like to hold grief in your heart while celebrating these precious moments,” Tricia Pinto said Monday. "Our grief sometimes gets lost in this story of survival. That's not our story. Our story is of loss and of love."

Reporters were warned in advance not to ask players about the tragedy, in which a gunman killed 20 students and six educators on Dec. 14, 2012. Players and coaches didn’t publicly address it. There was some talk before the game about perhaps not playing or trying to get the date moved.

Pinto was not the only affected player. Jack Street was a fourth grader at Sandy Hook in 2012. Everyone on the team, everyone in the town, was affected in some way, said Lorrie Rodrigue, Newtown’s school superintendent.

“We knew obviously there would be challenges, obviously emotional challenges on that date,” she said. “So we did, the principal and the athletic director, we consulted not only the team, but the family of loss who plays just to make sure we heard their voices. They wanted to play.”

Football has been a part of the Pinto family’s healing process since the shooting. Jack Pinto was buried in the jersey of his favorite player, New York Giants receiver Victor Cruz, who later came to the family’s home, visiting and playing video games with Ben and his friends.

Cruz, now retired from the league and working as an ESPN NFL analyst, said about 1,000 people sent him the video clip of Newtown’s winning pass, and it brings goosebumps to his skin as he watches it over and over.

“For football to be able to be that kind of escape for them, to provide that moment for them, It’s just incredible,” he said. “I just want to congratulate them and Ben and the whole town for staying strong. I just remember how strong they were. And this is a testament to how strong they actually are.”

But Tricia Pinto said she wants it understood that while they celebrate the win for Ben and his team, it does little to offset the pain of what happened. Their grief is ever present, she said.

“That heaviness in our hearts always returns,” she said. “To be honest, as the weekend came and went, we’re just missing Jack," she said.

As for Ben, she said, he would just like to be able to be normal. But he does appreciate the town’s support.

“I come off the field, I look into the crowd and I can barely see an empty seat,” Ben Pinto told Hearst Connecticut Media shortly after the final play. “Knowing that we have the whole town just right there behind us, it’s unbelievable.”

The town is making arrangements to hold some type of event to celebrate the championship, said Dan Rosenthal, Newtown's first selectman. But, that he said, should not be linked to what happened seven years ago.

“For our community, 12-14 will always be about what was lost and not what was won,” he said. “But what those boys accomplished, in a game that just happened to be played on 12-14. It was amazing.”