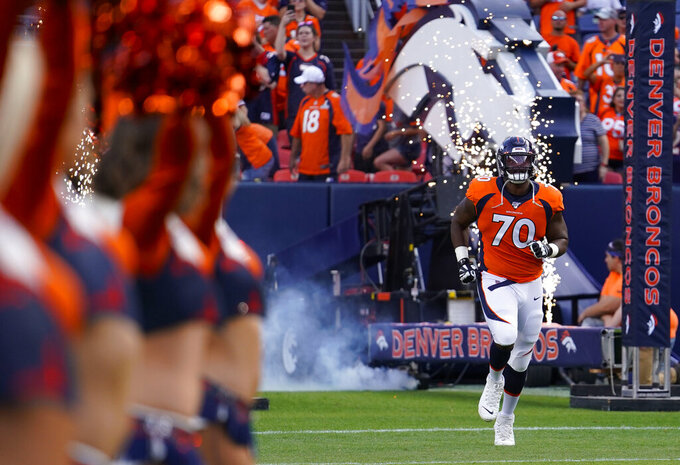 File-This Aug. 19, 2019, file photo shows Denver Broncos offensive tackle Ja'Wuan James (70) taking the field during an NFL preseason football game between the Denver Broncos and the San Francisco 49ers in Denver. A person with knowledge of the injury tells The Associated Press that James sustained a torn Achilles tendon while working out away from the Denver Broncos' facilities Tuesday, May 4, 2021. (AP Photo/Jack Dempsey, File)

ENGLEWOOD, Colo. (AP) — The NFL is reminding teams following Ja'Wuan James' potentially season-ending Achilles injury that they're not obligated to pay salaries of players who get hurt away from team facilities.

The memo sent to all 32 teams Wednesday and obtained by The Associated Press was spurred by James' injury he sustained while working out at a private gym away from Broncos headquarters on Tuesday.

The league encouraged teams to “remind players of the significant injury-related protection provided if they choose to work out at the club facility and the risks they undertake in choosing to train in non-NFL locations."

Players from 20 teams, including the Broncos, are boycotting voluntary offseason workouts at team facilities over COVID-19 concerns.

The NFL said in the memo that several teams had raised the issue of compensation after James, the Broncos' starting right tackle, got hurt.

The league said the Broncos are off the hook for James' $10 million salary for 2021, which would have been fully guaranteed had he gotten hurt while working out at the team's facilities.

“Injuries sustained while a player is working out ‘on his own’ in a location other than an NFL facility are considered ‘Non-Football Injuries’ and are outside the scope of a typical skill, injury and cap guarantee,” the memo said.

“Such injuries are also not covered by the protections found in paragraph 9 of the NFL Player Contract, meaning that clubs have no contractual obligation to provide salary continuation during the year in which the injury was sustained.”

“By contrast,” the memo added, "injuries sustained by a player while working out at a club facility or as specifically authorized by his club are considered ‘Football-Related Injuries.’ Under our agreement with the NFL Players Association, players that sustain ‘Football Related Injuries’ are entitled to significant protections.”

Those protections include salary payment, medical care, pension credit if the injury sidelines a player for three regular-season games and other benefits.

James had been working out at team headquarters earlier this offseason before honoring the players' union wishes to stay away during voluntary offseason workouts.

The Broncos did not draft a tackle last weekend after general manager George Paton explained James had been working out at team headquarters and “looks great and the expectation is he starts at right tackle and he plays well.”

James has played just 63 snaps since signing a four-year, $51 million free agent contract in 2019 that made him the highest-paid right tackle in league history at the time.

James was limited to parts of three games that year because of a knee injury and he opted out of the 2020 season because of the coronavirus.