NFL rushing leader not worried about workload for Titans 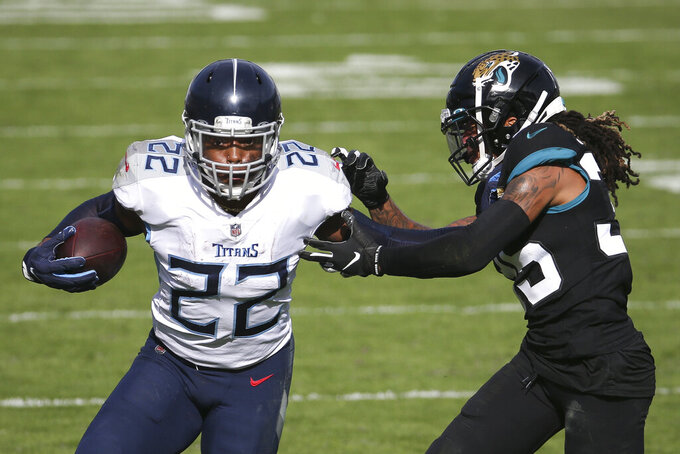 NASHVILLE, Tenn. (AP) — Derrick Henry sees his job as being very simple. Take care of his body through the week so he can play on Sundays.

How many times he carries the ball is not a concern for the NFL rushing leader.

Well, Henry is three carries away from 300 with three games remaining. Henry carried 303 times last season in leading the NFL with 1,540 yards rushing, and he added 83 more rushing attempts in helping the Titans reach the AFC championship for the first time in 17 years.

It's the kind of heavy workload that can wear down running backs. Managing Henry's snaps while allowing him to keep running his way into NFL history is the juggling act for Titans coach Mike Vrabel.

Henry was on the sideline last week early in the fourth quarter when the coach was alerted how close the running back was to 200 yards, so Vrabel gave Henry one more run.

That also made Henry the first player in NFL history to run for at least 200 yards and run for two touchdowns in four games, breaking a tie with Jim Brown, Barry Sanders and LaDainian Tomlinson.

Vrabel says it's a fine line to balance individual accomplishments with protecting a player for future team success. The Titans (9-4) are chasing their first AFC South title since 2008.

“It’s a good situation to be in but it’s not the easiest one ...,” Vrabel said. “Be second-guessing no matter what we do, or what decisions we make, which is the easy part of this job.”

Vrabel said the key is looking at the situation and understanding how excited teammates are for Henry and the offensive line who are so invested in his accomplishments.

Playing in Henry's favor is the Titans didn't use him much through his first three seasons after they used their third pick in the second round on the 2015 Heisman Trophy winner. He carried only 110 times as a rookie behind Pro Bowl running back DeMarco Murray and had 176 rushes in 2017.

This season, he has carried at least 25 times in a game six times. The Titans didn't need him much Oct. 13 in a rout of Buffalo when he ran for only 57 yards on 19 carries. Henry had a season-low 15 carries Dec. 6 in a loss to Cleveland.

Titans quarterback Ryan Tannehill says Henry's consistency and ability to seemingly be unfazed by all the hits is amazing and makes the running back special. Yes, Henry gets sore, but teammates don't see his mentality ever change.

The Detroit Lions (5-8) get the next chance to tackle Henry on Sunday. Lions defensive coordinator Cory Undlin says Vrabel and his staff are committed to running knowing Henry will wear people out by the fourth quarter.

“I mean, he comes out of the tunnel, he just turns around and says, ‘Hey, I’m just going to hand it off to this guy, he’s going to run right over here, and then we’ll just see if you can tackle him,’” Undlin said. “I mean that’s what they’re doing, and they’re really, obviously, efficient.”