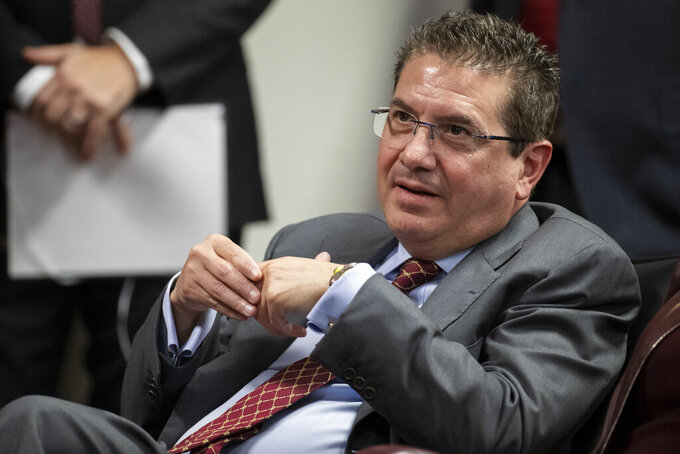 FILE - In this Thursday, Jan. 2, 2020, file photo, Washington Redskins owner Dan Snyder listens to head coach Ron Rivera during a news conference at the team's NFL football training facility, in Ashburn, Va. A person familiar with the situation tells The Associated Press the NFL has taken over the independent investigation into workplace conduct within the Washington Football Team. (AP Photo/Alex Brandon, File)

The NFL has taken over the independent investigation into workplace conduct within the Washington Football Team, owner Dan Snyder confirmed Monday.

Snyder said in a statement he and his wife, Tanya, suggested to Commissioner Roger Goodell the NFL assume full oversight of the review “so that the results are thorough, complete and trusted by the fans, the players, our employees and the public.” He said the organization remains committed to fully cooperating with the investigation.

The change of course comes less than a week since the Post reported additional examples of workplace sexual harassment, along with allegations that Snyder was personally involved.

Lawyers Lisa Banks and Debra Katz, who represent more than 15 former team employees, met with NFL senior vice president and special counsel for investigations Lisa Friel on Monday. The law firm of Katz, Marshall and Banks LLP sent a letter to Goodell on Thursday asking the league to launch its own investigation.

“Our clients would gladly participate in such an NFL investigation but do not feel safe speaking to investigators hired by Mr. Snyder and do not trust the investigation that is currently underway," Banks and Katz wrote in the letter.

Banks and Katz called their meeting a “productive discussion” and said they learned the NFL and the team agreed to release current and former employees from any non-disclosure agreements so they can speak with investigators.

“We are pleased and encouraged that the league is taking this matter seriously and we expect that it will take appropriate action against Daniel Snyder and the Washington Football Team upon conclusion of the investigation," they said.

Snyder vowed to change the culture inside the organization amid 42 women speaking out about their experiences working for Washington. In July, he said after the investigation was complete the team "will institute new policies and procedures and strengthen our human resources infrastructure to not only avoid these issues in the future but most importantly create a team culture that is respectful and inclusive of all.”

After the Post reported a former cheerleader saying Snyder invited her to a hotel room with one of his friends, and that longtime team executive Larry Michael made extra cheerleading videos for the owner showing sensitive material that wasn’t made public, Washington's owner denied those specific allegations.

“I want to unequivocally state that this never happened,” Snyder said of the report he invited a cheerleader to a hotel room in 2004. “Furthermore, I do not have any knowledge of the 10-year-old videos referenced in the story. I did not request their creation, and I never saw them.”

In a separate statement, the team said it was “deeply distressed by these terrible allegations and (is) committed to investigating them fully.”

Michael retired from his job as a senior vice president and radio voice of the team in the days before the initial Post story was published. It was part of a turbulent summer from the team, which dropped its longtime name amid pressure from sponsors because of longstanding complaints the name was a racial slur against Native Americans. Washington has yet to announce a permanent name or logo.

Goodell said the league strongly condemns the “unprofessional, disturbing and abhorrent behavior and workplace environment alleged in the report, which is entirely inconsistent with our standards and has no place in the NFL.”